Ustilagic acid is a cellobiose lipid produced by the corn smut fungus, Ustilago maydis. It was discovered in 1950 (Haskins RH, Can J Res 1950, 28, 213) and was shown to be an amphipathic glycolipid with surface active properties and secreted in large amounts under conditions of nitrogen starvation. It consists of a cellobiose moiety glycosidically linked to the w-hydroxyl group of 15,16-dihydroxy hexadecanoic or 2,15,16 trihydroxy hexadecanoic acid (ustilic acid). In addition the cellobiose is esterified with acetic acid and hydroxy hexanoic or hydroxy octanoic acid (Eveleigh DE et al., J Biol Chem 1964, 239, 839). 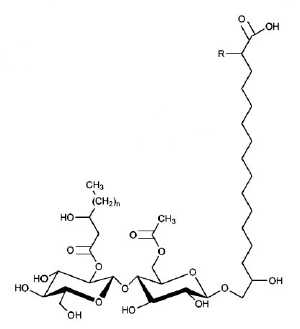 Unusual glycolipids, roselipins, were described in the marine fungus Gliocladium roseum (Tabata N et al., J Antibiot 1999, 52, 815). Several forms were described : roselipins 1A, 1B, 2A and 2B. One of these is shown below.

A mannose moiety is linked to a hydroxyl and an arabinitol moiety is ester-linked to the carboxyl of a nona-methylated tri-hydroxylated triene fatty acid (C20). Several forms were found with different arabinitol stereoisomers and various acetylations. These molecules were shown to be potent  inhibitors of diacylglycerol acyltransferase (Tomoda H et al., J Antibiot 1999, 52, 689). Structure/activity studies have shown that the arabinitoyl fatty acid core is essential for eliciting the activity (Tomoda H et al., J Antibiot 2003, 56, 24).

Resin glycosides (or glycoresins) are glycolipids of plant origin, which are mainly isolated from seeds and roots of Convolvulaceae (morning glory family, genus Ipomoea, Convolvulus, Cuscuta and Calystegia) and Scrophulariaceae plants. Investigations into resin glycosides began in the 19th century (Kayser GA, Justus Liebigs Ann 1855, 51, 81) as essential ingredients of traditional folk medicines. They consist frequently of four deoxy sugars (sometimes 3 or 5) such as D-quinovose, D-fucose, and L-rhamnose, and of 11-hydroxy fatty acids, namely jalapinolic acid (11-hydroxyhexadecanoic acid) and convolvulinolic acid (11-hydroxytetradecanoic acid). Among convolvulaceae, the genus Ipomoea is the best known for these components and as medicinal plants used for their purgative and antihelminthic properties. Several other pathologies have been treated in Mexico and Central America by extracts of these plants. Modern investigations have revealed that these glycolipids may have antimycobacterial activity, cytotoxicity and some activity at the level of the central nervous system.

Most resin glycosides with bioactivity have a macrolidic structure (lactones) as in the case of murucins, murucoidins, tricolorins, orizabins and arboresins. That structure is characterized by a glycosidically link between the hydroxyl group of the fatty acid and a sugar residue and an intramolecular esterification between the fatty acid carboxylic group and one of the sugar hydroxyl groups. Furthermore, several sugar hydroxyl groups may be esterified with short chain organic acids : 2-methylbutyric acid, 2-methyl-2-butenoic (tiglic) acid or 3-hydroxy-2-methylbutyric (nilic) acid. The simplest glycoresin among the height compounds (tricolorins) described in Ipomoea tricolor (Bah M et al., Tetrahedron 1997, 53, 9007) is shown below. 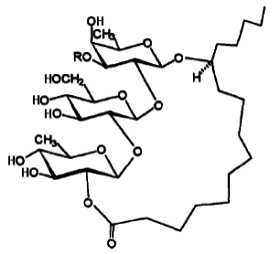 One tricolorin from Ipomoea tricolor

Pentasaccharide glycolipids (pescaproside, pescapreins) were studied in Ipomea pres-caprae (Pereda-Miranda R et al., J Nat Prod 2005, 68, 226), their core linked to jalapinolic acid was shown to be formed by fucose and four rhamnose residues.
Similar structures but without the ester link have been also described in Convolvulaceae and Scrophulariaceae.

New cyclic glycolipids, named glomerasides, have been isolated from the glandular trichome exudate of Cerastium glomeratum (Caryophyllaceae) (Asai T et al., Phytochemistry 2012, 82, 149). Fourteen compounds have been analyzed, they have a glycosidic linkage between the hydroxy group of the glucose and the C-9, C-11 or C-12 position of the fatty acid, a hydroxy docosanoic acid. They have also an ester link between the C-6 hydroxy group of the glucose ring and the carboxyl group of the hydroxylated fatty acid. The structure shown below is the most abundant in the glandular extract.