Glycosides of fatty acids
with a O-glycosyl link

These lipids are also well known as biosurfactants produced externally by Pseudomonads living on hydrocarbons. They are composed of one or two rhamnose molecules most commonly linked to a hydroxyl group of a hydroxydecanoic acid which is esterified by another hydroxy fatty acid. Rhamnolipids were found for the first time in Pseudomonas pyocyanea after growth on glucose (Bergstrom S et al., Arkiv Kemi Mineral Geol 1946, 23A, 1). That was the first description of a glycolipid formed by a link between a sugar residue and a hydroxylated fatty acid.

Similar rhamnose lipids but with only one rhamnose molecule or with additional acylation by decanoic acid have been described (Yamagushi M et al., Chem Ind 1976, 4, 741). Furthermore, P. pyocyanea produced often a mixture of several homologs with different saturated and unsaturated fatty acids. All these compounds have shown antifungal properties against several fungi. They are used as cosmetic additives : components of liposomes, emulsions, and humectants.

Rhamnolipids have been shown to enhance biodegradation of a variety of alkanes, even in soil systems. Furthermore, they can be used to clean sites contaminated with metals, as they form chelates with trace metals as manganese, cadmium, copper, lanthanum, and zinc.
Rhamnolipids are also a source of stereospecific L-rhamnose, a compound used commercially in the production of high-quality flavor compounds.

These lipids, formerly named sophorosides, are found and excreted into the culture medium by Candida or related yeast species and are known as surfactants. They were first described by Tulloch AP (Can J Microbiol 1964, 10, 359) and found to be composed of a disaccharide moiety linked to one hydroxyl group of one w or (w-1)-hydroxy fatty acid (saturated or monounsaturated). The sugar (sophorose or 2-O-glucopyranosyl–D-glucopyranose) may further show mono- or diacetylation at the 6′ and 6″ positions. The nature of the hydroxy fatty acid is characteristic, with the hydroxyl group being located on the n or n-1 carbon atom; the carbon chain length of 16, 17 or 18 is subject to modification by the composition of the growth medium. Sophorosides with unsaturated C18 fatty acids have been recognized in Candida bogoriensis. 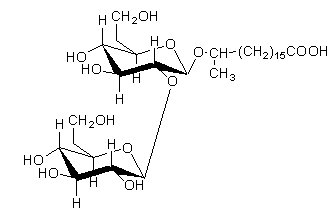 An unique sophorolipid was isolated from Torulopsis spp which differed from those already mentioned in that it was a macrocyclic lactone in which the carboxy group of the hydroxy fatty acid was esterified with the 4′ hydroxyl group of the terminal glucose in sophorose. Two acetate groups are also present in that lipid.

Sophorolipids exhibit surfactant activity because of their amphiphilic structure. Among the sophorolipid producers, Candida bombicola is the most studied species because it produces sophorolipid species in large quantities. Products yields  up to 300 g of sophoroses per liter of culture medium have been reached. The composition of the hydroxylated fatty acid varies depending on the culture conditions. Furthermore, lactonization frequently occurs between the carboxyl group and the 4″ OH group of the sophorose. Sophorolipids are used as bactericides in the formulation of skin and body-care products (deodorant, anti-acne ingredient, from Soliance) but these emerging biosurfactants may have many other application potentials. They were shown to be useful in hard surface cleaning and automatic dishwashing rinse aid formulations. This is attributed in part to their low foaming profile combined with their surface activity properties, which are of potential interest in additional applications (review in : Develter DW et al., Eur J Lipid Sci Technol 2010, 112, 628).
Derivatives of natural sophorolipids were shown to have potent virucidal activity against HIV and sperm-immobilizing activity against human semen (Shah V et al., Antimicrob Agents Chemother 2005, 49, 4093).

Hydroxy fatty acids may be released from sophorolipids and lactonized into macrocyclic esters, they are used in the perfume and fragrance industry.

Novel compounds, similar to sophorolipids, have been described in different myxomycetes (Rezanka T., Phytochemistry 2002, 60, 639). These compounds are formed of one multibranched, hydroxylated and polyunsaturated fatty acid (22 carbon atoms) glycosylated at a hydroxyl group by glucose, mannose, or rhamnose.

– Other O-glycosides of fatty acids 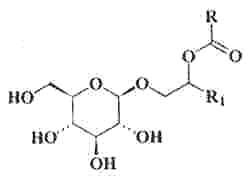 Various homologues were described with R having 13 or 15 carbon atoms and R1  17 or 18 carbon atoms.

It is well known that when faced with overcrowding or starvation, the worm Caenorhabditis elegans secretes a pheromone, which facilitates communication between individuals for adaptation to adverse environmental stimuli (Golden JW et al., Science 1982, 218, 578). The first pheromone to be characterized was the “daumone”, a glycolipid formed by a hydroxylated fatty acid (7 carbons) linked to a specific oligosaccharide, the ascarylose (Jeong PY et al., Science 2005, 433, 541). Later, several other forms (ascarosides) have been isolated with various carbon chains (Butcher RA et al., Nature Chem Biol 2007, 3, 420). One of the most potent “dauer” pheromone is the ascaroside 2.

Fatty acid glucuronides have been isolated from human liver as products of the action of UDP-glucuronosyltransferases and microsomes (Jude AR et al., Arch Biochem Biophys 2000, 380, 294). Their formation has been elucidated. Glucuronidation of phytanic and docosahexaenoic acids by liver and intestinal microsomes was demonstrated. This reaction may play a role in modulating the availability of these fatty substrates as ligands for nuclear receptors (Little LM et al., Drug Metab Dispos 2002, 30, 531).

Various fatty acid disaccharides have been isolated from cape gooseberry (Physalis peruviana) (Mayorga H et al., Phytochemistry 2002, 59, 439). The glycoside moiety contains glucose and/or arabinose and the fatty acid chain is ethyl 3-hydroxyoctanoate or butyl 3-hydroxybutanoate. Other fatty acids have been also detected. One of these molecules is shown below.

Resin glycosides (or glycoresins) are glycolipids of plant origin, which are mainly isolated from Convolvulaceae (morning glory family, genus Ipomoea, Convolvulus, Cuscuta) and Scrophulariaceae plants.  They consist of three to five deoxy sugars such as D-quinovose, D-fucose, and L-rhamnose, and of 11-hydroxy fatty acids, namely jalapinolic acid (11-hydroxyhexadecanoic acid). Several of these glycoresins have been described in the roots of Ipomea operculata (Ono M et al., Chem Pharm Bull 1990, 38, 2650). The simplest one (operculinic acid C) is shown below.

These glycosides are likely at the origin of the use of root extracts of Convolvulaceae in folk medicine as laxative or antihelminthic.

Most resin glycosides have a macrolidic structure (lactones), but, in some plants, the fatty acid carboxylic group remains free. These structures are characterized by a glycosidically link between the hydroxyl group of the fatty acid and one of the sugar residues.  Furthermore, several sugar hydroxyl groups may be esterified with short chain organic acids : 2-methylbutyric acid, 2-methyl-2-butenoic (tiglic) acid or 3-hydroxy-2-methylbutyric (nilic) acid.
In the convolvulaceae Ipomea pes-caprae, a pentaglycoside glycolipid with a composition similar to the macrolidic structure already known as pescaproside has been described (Pereda-Miranda R et al., J Nat Prod 2005, 68, 226). In Ipomea tyrianthina, a tetrasaccharide glycolipid, thyrianthinic acid, with a composition similar to the macrolidic structures already known, has been described (Leon-Rivera I et al., J Nat prod 2008, 71, 1686).

Acidic glycolipids have been isolated from Cuscuta chinensis (parasitic plant of the Convolvulacea family), a plant which is one of the most important traditional Chinese medicines. These glycolipids, cuscutic acids, are formed by convolvulinolic or jalapinolic acid glycodically linked to a tri- or a tetraglycoside (glucose, rhamnose ). The saccharides may be esterified by various organic acids (nilic acid, tiglic acid, 2-methylbutyric acid, propionic acid, acetic acid) (Du XM et al., Phytochemistry 1998, 48, 843).

One of the cuscutic acids present in Cuscuta sinensis