Several classes of complex lipids have one amino acid linked to both a long-chain alcohol and a fatty acid or to a glycerolipid, they are sometimes named lipoamino acids. Some of them may contain phosphorus and another polar moiety. All are formed with three or more different molecules. Simple forms of these lipoamino acids containing only amino acid and fatty acid(s) are described in the “simple lipids” part.

These lipoamino acids are in general present in Bacteria and lower plants (fern, algae, protozoa), some more complex structures have been recently described in human.

Several types of derivatives are known according to their amino acid moiety:

Some of them are known as Siolipin A. In these compounds lysine is N-linked to a fatty acid (normal or hydroxylated, R1) and to a fatty alcohol (R2) (ester link). They are found in Streptomyces species of bacteria. 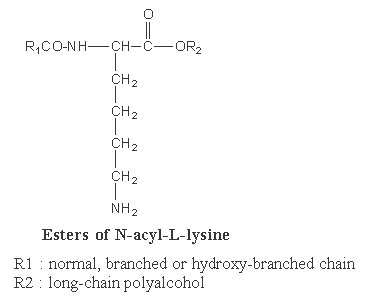 In these lipids ornithine is linked to a fatty acid (R1) by an amide link and to a long-chain fatty alcohol (R2) by an ester link. 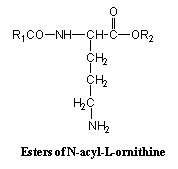 The fatty acid chain (R1) has 16 to 18 carbon atoms and the fatty alcohol may have a cyclopropane ring. They occur in photosynthetic purple bacteria (Gorshein A, Biochim Biophys Acta 1968, 152, 358).
Less complex forms containing ornithine linked to fatty acids only were also described.

Other ornithine-containing lipids are found in Gram negative bacteria and have been reported in some Gram-positives, like Mycobacterium and Streptomyces species but are absent in Archaea and Eukarya (Geiger O et al., Prog Lipid Res 2010, 49, 46). They are commonly formed of a 3-hydroxy fatty acyl group that is attached in amide linkage to the a-amino group of ornithine an a second fatty acyl group is ester-linked to the 3-hydroxy position of the first fatty acid.

The glycine-containing lipids have been identified in the gliding bacterium Cytophaga johnsonae (Kawazoe R et al., J Bacteriol 199, 173, 5470) and the Gram-negative sea-water bacterium Cyclobacterium marinus(Batrakov SG et al., Chem Phys Lipids 1999, 99, 139). These lipids consist of the amino acid glycine and two fatty acyl residues, using the acyl-oxyacyl structure. The structure of glycine lipid from C. marinus is mainly a N-[3-D-(13-methyltetradecanoyloxy)- 15-methylhexadecanoyl]glycine (see figure below). In this structure, an iso-3-hydroxyfatty acyl group is amide-linked to glycine and its 3-hydroxy group is esterified to another iso-fatty acid.

During the search of a biomarker for Niemann-Pick disease, a lipid compound identified as a lysosphingomyelin was shown to be sensitive and specific in the blood of patients (Grease AK et al., Orphanet J Rare Dis 2015, 10, 78). Later, that biomarker was identified as a N-palmitoyl-O-phosphocholineserine, based on the results from mass spectrometric analyses and chemical derivatizations (Sidhu R et al., J Lipid Res 2019. 60, 1410).
The species with a palmitoyl moiety is the most abundant but further analysis demonstrated that other species with acyl groups ranging from C14 to C24 were also elevated in plasma of patients with Niemann-Pick disease. A cat model revealed that the palmitoyl species was also elevated in both central and peripheral tissues. Understanding the biosynthesis and regulation of these lipoamino acids may uncover the potential therapeutic targets for this class of disease. 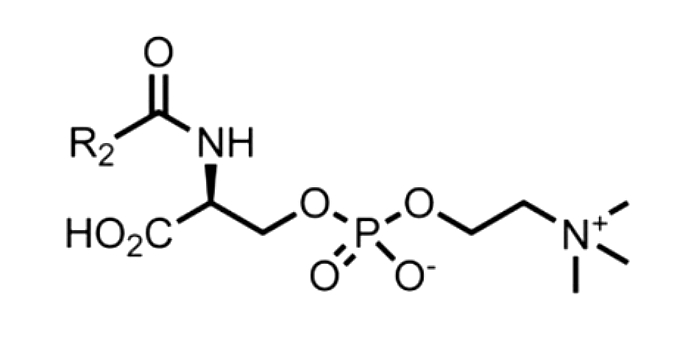 These lipids are glycerolipids and are mainly derived from homoserine, they are characterics of algae. Some forms have an alanine moiety instead of homoserine. As the polar head may be considered derived from betaine (N,N,N-trimethyl glycine), these lipids are commonly named betain lipids.

The homoserine-derived lipids were first identified in a yellow-green algae, Ochromonas danica (Chrysophyceae) where they account for more than 50% of total lipids (Brown AE et al., Biochemistry 1974, 13, 3476). It has been suggested that homoserine-derived lipids, which are formed by an ether linkage between homoserine and a diacylglycerol  molecule, are widely distributed and even found in some higher plants (Rozentsvet OA et al., Phytochemistry 2000, 54, 401). Furthermore, they were shown to be a substitute for phospholipids in several plants (Brown AE et al., Biochemistry 1974, 13, 3476). This replacement has been well documented in the plants Arabidopsis and oat, and most pronouncedly in the a-proteobacteria Rhodobacter sphaeroides and Sinorhizobium meliloti, which under phosphate stress become depleted of membrane phospholipids and induce the synthesis of non-phosphorous lipids, such as the betaine lipid diacylglyceryl-N,N,N-trimethylhomoserine (Benning C et al., Biochim Biophys Acta 1995, 317, 103). Similar observations were reported for phytoplankton in the ocean using non-phosphorus lipids in response to phosphorus scarcity (Van Mooy BAS et al., Nature 2009, 458, 69). 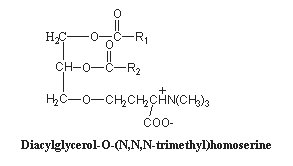 As they contain a quaternary ammonium group, homoserine-derived lipids resemble phosphatidylcholine in some respects, and a balance between their levels was suggested (Eichenberger W, Plant Sci Lett 1982, 24, 91).