Nucleolipids (or liponucleotide) are hybrid molecules composed of a lipid covalently linked to a nucleobase, or a nucleoside, or a nucleotide or an oligonucleotide. Hybrid lipid-nucleoside structures occur in eukaryotic and prokaryotic cells. Present in some living cells or organisms, such as tunicamycin, they have been also developed for biotechnological applications (review in Gissot A et al., Org Biomol Chem. 2008, 21, 1324).

Tunicamycin,  first isolated by Takatsulu (Takatsulu A et al., J. Antibiot 1971,  24,  215) from Streptomyces lysosuperificus, is a mixture of homologous nucleoside linked with a fatty acid which may have a branched, linear, saturated or unsaturated fatty acid side chain. That compound is well known to inhibit the first step of glycoprotein synthesis, preventing core oligosaccharide addition to nascent polypeptides and thereby blocking protein folding and transit through the endoplasmic reticulum. It has antimicrobial, antifungal, antiviral and antitumor activities. Because of its action on peptidoglycan synthesis tunicamycin is a powerful antibiotic against gram-positive bacteria. The use of tunicamycin with whole animal cells in culture has proved a valuable tool in investigations on the biological significance of N-glycosidically linked oligo- saccharides of several proteins. 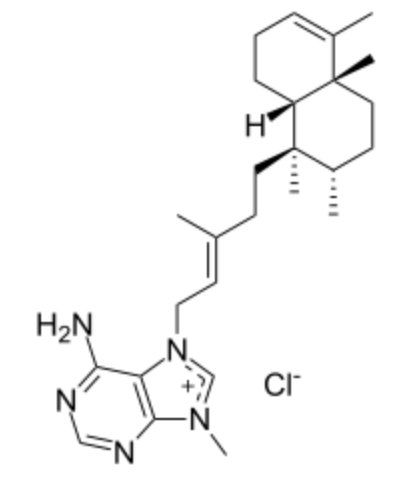 Cytidinediphosphate diacylglycerol coenzyme (CDP-DAG), a diphosphorylated nucleolipid (or liponucleotide), is present in mammalian cells and plays a central role in the metabolism of phosphoinosides and cardiolipins (Heacock AM et al., Biochim Biophys Acta 1997, 1348, 166).
CDP-DAG and its analogue 2′-deoxy- CDP-DAG are also present in prokaryotic cells as key intermediates in the synthesis of all glycerophospholipids. 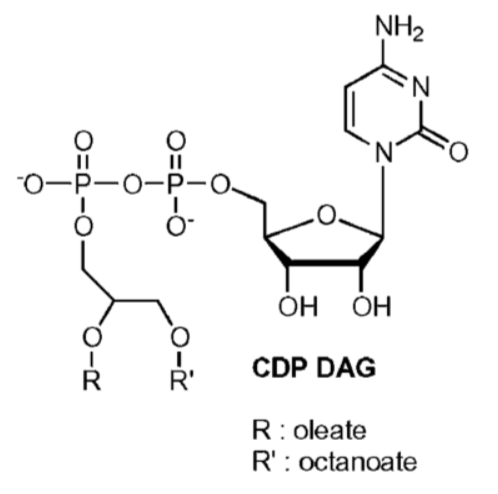 Nucleoside chemotherapeutic which enables the inhibition of the growth of various mammalian cell lines, DNA viruses, and rodent tumors, has been improved by attachment of a hydrophobic moiety in order to enhance cell uptake.

In1978, the synthesis of the single diastereoisomers of 1-β-D-arabinofuranosylcytosine-5′-diphosphate-L-1,2-dipalmitine after it had been reported that it inhibits the growth of L51784 cells in mice and of human colon carcinoma HCT-15 cells (MacCoss M et al., Biochem Biophys Res Commun 1978, 85, 714).

A review covers all aspects of these nucleolipids, namely their natural occurrence, their synthesis, their molecular recognition, as well as their aggregation behavior. Potential future aspects of nucleolipids in material sciences and for the elucidation of biochemical reactions in living cells are discussed (Rosemeyer H, Chem Biodiv 2005, 2, 977).