Ceramides are the simplest sphingolipids and situated at the center of sphingolipid metabolism. Thus, the transfer of a phosphorylcholine head group from phosphatidylcholine to ceramide yields another phospholipid, sphingomyelin (also sphingolipid) and the addition of carbohydrate groups from the sugar donor, UDP-hexose, yields complex glycosphingolipids (cerebrosides, sulfatides, gangliosides). These compounds can be converted back to ceramide by the removal of sugars (glycosidases) or phosphorylcholine by sphingomyelinases. An enzyme (ceramidase) is able to cleave the amide-linked fatty acid of ceramide and free sphingosine.

Ceramides can be released from sphingomyelin or by de-novo synthesis in response to substances like vitamin D3, tumor necrosis factora, g-interferon, or interleukin 1. In most cell types, ceramides mediate antimitogenic responses such as cell differentiation, cell cycle arrest, cell senescence or apoptosis (Ruvolo PP, Pharmacol Res 2003, 47, 383).
Free ceramides are separated with the neutral lipid fraction on a silica column and the minute amounts present in cell extracts are best analyzed after derivatization before HPLC. Their chromatographic behavior is not very different from that of diacylglycerols which are structurally similar. The amide linkage is resistant to hydrolysis but is disrupted by prolonged heating in an alkaline medium but better with an acidic reagent. Ceramide can be prepared conveniently from complex glyco sphingolipides by chemical degradation.

Investigations on skin have revealed that ceramides play an important role in the formation of a water permeability barrier. That barrier, localized in the stratum corneum layer, is essential for mammalian terrestrial life, because it restricts transepidermal water loss in protecting animals from dessication (Uchida Y et al., J Dermatol Sci 2008, 51, 77). The molecular heterogeneity of ceramides synthesized in the epidermis and their possible roles in epidermal permeability barrier functions have been reviewed in 2009 (Mizutani Y et al., Biochimie 2009, 91, 784).

The stratum corneum of the skin (the upper-most layer made of dead cells and corneocytes) has a unique lipid composition which comprises mostly free fatty acids, cholesterol and ceramides (including O-acylceramides). These are different molecular species differing by the head group architecture and by the mean fatty acid chain length. The fatty acid esterified to the amide of the (phyto)sphingosine head group can be either a ω-hydroxy or nonhydroxy fatty acid. The fatty acid chain length varies from 16 to 34 carbon atoms. One ceramide (figure below) contains linoleic acid linked to the long chain (n=30) ω-hydroxy fatty acid. This molecule is thought to be of importance for proper skin barrier function (Bouwstra et al. J Lipid Res 1998, 39, 186). The effects of omega-O-acylceramide structures and concentrations in healthy and diseased skin barrier lipid membrane models has been extensively described (Opálka L et al., J Lipid Res 2020, 61, 219).

A new class of acylceramides, the 1-O-acylceramides, have been described in humans and mice epidermis. These compounds contain, in both the N- and 1-O – position, long to very long acyl chains (from C16 to C26). They make up about 5% of all esterified ceramides in epidermis. Considering their chemical structure and hydrophobicity, it has been postulated that they should contribute to the water barrier homeostasis in skin (Rabionet M et al., J Lipid Res 2013, 54, 3312). It has been shown that epidermal 1-O-acylceramides arise shortly before birth during the establishment of the water permeability barrier in mice (Rabionet M et al., Lipids 2022, 57, 183-195). Furthermore, fractionation of human epidermis indicates 1-O-acylceramides concentrate in the stratum corneum. During in vitro maturation into reconstructed human epidermis, human keratinocytes dramatically increase 1-O-acylceramides levels indicating they are one important source of these lipids.

These lipids have potential properties which are used in the treatment of various forms of dermatoses (Coderch L et al., Am J Clin Dermatol 2003, 4, 107).
It was shown that all the w-hydroxyceramides of corneocyte lipid envelopes are attached to proteins through their ω-hydroxyl groups (Stewart ME et al., J Lipid Res 2001, 42, 1105). Thus, even after polar solvent extraction, the cells remain coated with a bound lipid monolayer, which can be released only by mild alkaline hydrolysis.

Another type of related compounds was detected in pig and human epidermis in 1978 by Gray GM et al. (Biochim Biophys Acta 1978, 528, 127). Its structure was elucidated later (Wertz PW et al. Prog Lipid Res 1986, 25, 383) and described as the glucosylated version of the O-acylceramide shown previously (O-acylglucosylceramide or glycosphingolipid), the glucose moiety being linked to the a-hydroxyl group of sphingosine.

A review may be consulted for the recent advances in our understanding of the synthesis and degradation pathways, physiological functions, and pathology of epidermal ceramides and acylceramides (Kihara A et al., Prog Lipid Res 2016, 63, 50).

An unusual ceramide (and its corresponding glucopyranoside derivative) with a C15 fatty acid linked to a C27 phytosphingosine-type amino alcohol was isolated from lipid extracts of a medicinal herb (Conyza canadensis, composita ) (Mukhtar N et al., Phytochemistry 2002, 61, 1005). The medicinal properties of this plant could be related to the presence of these sphingolipids which have been reported to exhibit antihepatotoxic and immunostimulatory activities (Kim et al., J Nat Prod 1997, 60, 274; Natori et al., Tetrahedron 1994, 50, 2771). A ceramide with a2-hydroxylated C24 fatty acid linked to a C18 sphingosine-type amino alcohol unsaturated at the carbon 11 has been isolated in leaves of Premna microphylla, a plant used in Chinese folk medicine (Zhan ZJ et al., Lipids 2003, 38, 1299).
A novel ceramide type has been described in bulbs of Zephyranthes candida (Amaryllidaceae), species used as ornamental and medicinal plant in China (Wu ZP et al., Lipids 2009, 44, 63). That ceramide, candidamide B, is characterized by a tertiary amide structure. 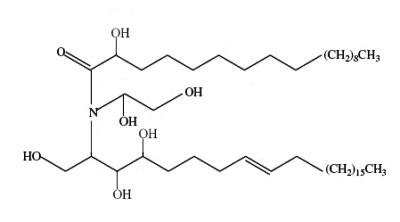 Novel ceramides named lactariamides were isolated from the fungus Lactarium volemus (Russullaceae) and determined to be formed from a hydroxylated fatty acid (2-hydroxytetracosanoic acid or 2-hydroxyoctadecanoic acid) linked to an amino alcohol either methylated (2-amino-9-methyl-4,8-octadecadiene-1,3-diol) or bearing an epoxy group (2-amino-3,4-epoxyoctadecan-1-ol) (Yue JM et al., J Nat Prod 2001, 64, 1246).
New ceramides formed from the same methylated amino alcohol, as described above, linked to normal or hydroxylated fatty acids of 14 to 18 carbon atoms have been described in several mushrooms belonging to various families (Yaoita Y et al., Chem Pharm Bull 2002, 50, 681).
Novel ceramides with cyclopropane-containing alkyl chains (gracilarioside and gracilamide) were isolated and characterized from the red alga Gracilaria asiatica (Sun Y et al., J Nat prod 2006, 69, 1488). If we except the description of cerebrosides with cyclopropane-containing chains in marine sponges, it is the first description of these structures in plants.

Three novel ceramics were isolated from a deep-sea starfish species, the orange cookie starfish Ceramaster patagonicus (Malyarenko TV et al., Marine Drugs 2022, 20, 641). They contain iso-C21 or C23 Δ9-phytosphingosine as a long-chain base and have C16 or C17 (2R)-2-hydroxy-fatty acids of the normal type. These ceramides exhibit slight to moderate cytotoxic activity against human cancer cells (HT-29, SK-MEL-28, and MDA-MB-231).

A ceramide analogue, complanine, an inflammation-inducing compound has been isolated from the marine fireworm (Eurythoe complanata, Polychaeta) (Nakamura K et al., Org Biomol Chem 2008, 6, 2058). Its structure could be characterized by a di-unsaturated aminoalcohol with 11 carbon atoms N-acylated with a GABA derivative, trimethylammonium-4 butanoic acid. The activation of PKC by complanine was hypothesized to be one of the molecular mechanisms by which E. complanata induced inflammation. Two other compounds of the complanine family were isolated from the same marine worm (Nakamura K et al., J Nat Prod 2010, 73, 303).

Bathymodiolamides, ceramide derivatives, have been isolated from a deep-sea hydrothermal vent mussel, Bathymodiolus thermophilus (Andrianasolo EH et al., J Nat Prod 2011, 74, 842). These compounds are formed of an aminopentane tetraol substituted with three fatty acids, two saturated (C12 and C16) and one unsaturated (C16:3n-4 or C11:2n-4). One of the two ceramides is shown below. Both are able to induce apoptosis in two cancer cell lines, HeLa (IC50 0.4-0.5 mM and MCF7 (breast cancer) (IC50 0.1- 0.2 mM). These compounds represent new chemical structures and may have potential in future drug discovery efforts.

Capnoids (or N-fatty acyl capnine) are other sulfonic acid derivatives of ceramide which were first described in bacteria of the genus Capnocytophaga (Godchaux W et al., J Bacteriol 1980, 144, 592). Later, they were described in most gliding bacteria of the Cytophaga-like genera (they possess the ability to move over solid surfaces but not through liquids and possess no known locomotor organelles, such as flagella) (Godchaux W et al., J Biol Chem 1984, 259, 2982).

Capnoids are either capnine itself (R = H), which is 2-amino-3-hydroxy-15-methylhexadecane-1-sulfonic acid, or N-acetylated derivatives. N-acyl capnine was also found in the soil bacterium Chryseobacterium sp. and in a marine Flavobacterium sp. (Kamiyama T et al., J Antibiot 1995, 48, 929). Such compounds, also named sulfobacins, can also easily be synthesized (Sharma A et al., Tetrahedron Lett 2007, 48, 3705). These compounds have interesting properties since they inhibit the binding of von Willebrand Factor to its receptor with IC50S of 0.47 and 2.2 microM, respectively. Sulfobacin A also inhibits ristocetin-induced agglutination in human platelets fixed with paraformaldehyde with an IC50 of 0.58 microM (Kamiyama T et al., J Antibiot 1995, 48, 924).

The fatty acid methyl esters obtained from the lipids were heterogeneous (from 14, 15, and 16 carbon atoms), but in all cases were rich in hydroxylated fatty acyl groups, which constituted 66 to 95% of the total. The habitats range of these bacteria are from the human subgingival tooth surface (the Capnocytophaga spp.) to marine sediments (the marine Cytophaga sp.). The organisms of one genus (Capnocytophaga) are strictly fermentative (though aerotolerant), whereas the others are aerobes. A role in gliding motility of these sulfonolipids is suggested and an interest in this potential role is stimulated by the fact that the diatoms Nitzschia, the only other group of organisms of which at least one member contains N-acylaminosulfonates (see above), exhibit a form of motility which resembles that of the gliding bacteria.

Novel capnoids, variants of the previously described, have been found in extremely halophilic bacterium Salinibacter ruber (Corcelli A et al., Appl Environ Microbiol 2004, 70, 6678). They have have been shown to have the structure 2-carboxy-2-amino-3-O-(13′-methyltetradecanoyl)-4-hydroxy-18-methylnonadec-5ene-1-sulfonic acid. This sulfonolipid may be used as a chemotaxonomic marker for the detection of these bacteria.
The capnine analog (halocapnine) constituting the backbone of these sulfonolipids is slightly different from the capnine of Capnocytophaga and Flexibacter, as it corresponds to an iso branched unsaturated sphingoid base containing an additional hydroxyl group in C4 and an additional COO- group in C2 .To distinguish the capnine of the halophilic bacteria from those previously found in other organisms the name of halocapnine has been proposed (Baronio M et al., J Lipid Res 2010, 51, 1878).

For the first time two ceramide 1-sulfates have been isolated from the Bryozoa Watersipora cucullata (Ojika M et al., Tetrahedron Lett 1997, 38, 4235). One of these compounds is shown below.

The other one has a C18 fatty acid linked to a branched analogue of sphingatrienine. These compounds showed the inhibitory activity against a human topoisomerase I with IC50s of 0.2 to 0.4 mM.