His birth certificate kept in the registry book of the town of Angers bears the signature of his father, grandfather and a great-uncle, all of whom were surgeons. 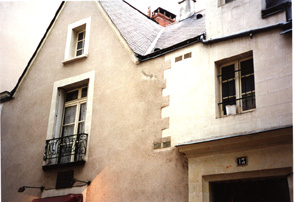 His father, Michel, was an important member of the medical profession in 18th century medicine, his ancestors being involved in apothecary or surgery since the 16th century. He became a Doctor of medicine in Reims in 1777 and a master of surgery in Angers in 1778. He practiced and taught obstetrics and published a famous treatise on midwifery. He received the warrant of surgeon to Louis, Duke of Anjou (later Louis the 18th), for his castle at Angers. He was director of the first institution for foundlings in Angers and became a regional counselor and dean of the medical school in 1820. He died in 1845 at 91.

Michel Eugene grew up in Angers during the French Revolution and the Terror. In 1793, he witnessed the execution of two young girls. Several bloody souvenirs of his childhood remained with him, leaving a permanent aversion for politics.
After a private education, he went to the Ecole Centrale, formerly the university, in Angers in 1799, where for four years he studied Greek, Italian, botany, mineralogy, mathematics, physics, and chemistry.

At the end of these studies, in 1803, the time had come to choose a career. As he was not attracted by medicine, he chose chemistry. With a letter of introduction of Proust J , pharmacist in Angers and brother of the famous chemist Proust JL, he left Angers for Paris where Fourcroy, a disciple of the famous Lavoisier decapitated in 1794, was a renowned teacher at the National Museum of Natural History. This Museum, renamed by the Convention in 1793, was founded in 1626 as the “Jardin Royal des Plantes Médicinales”. Vauquelin, an assistant of Fourcroy, took Chevreul into his laboratory even when later, in 1804, he was appointed professor of applied chemistry at the Museum. At that time, many famous scientists were present in the Museum, notably Cuvier, Lamarck, Saint-Hilaire and Jussieu.

Vauquelin, the first chemist able to separate biological materials into fats, proteins, starches, and sugars, introduced Chevreul to the study of organic compounds and more precisely to coloring principles in natural products. He studied these products up to 1811 in the small private laboratory of Vauquelin, separating natural dyes from complex mixtures of oils, resins and gums.

In 1810, at the age of twenty-four, Chevreul obtained his first position as assistant naturalist at the Museum. He was also made, in 1813, professor of physics at the Lycée Charlemagne, one of the leading schools in France, and held this post until 1828.

In chemistry, Chevreul’s fame stems chiefly from his investigations of the structure and properties of lipids, which culminated in his “Recherches chimiques sur les corps gras d’origine animale” published in Paris in 1823. He was the first lipid specialist to discover the concept of fatty acids, several chemical species such as oleic, butyric, caproic and capric acids, stearic acid (“stearine”), cholesterol (“cholesterine”) and glycerol (“glycérine”). Furthermore, he clearly demonstrated that fats have the structure of ethereal salts and are a combination of glycerol and fatty acids, easily separated by saponification. These discoveries led to the establishment of the great industry of stearin candles. Few areas of chemistry had been so thoroughly explored at the time. In addition, these investigations initiated a broadening of the study of the composition of organic compounds among chemists in Europe and America.

In 1818 he married Sophie Davallet, Vauquelin being one of the witnesses. His unique son Henri, born in 1819 became a judge and a noted historian.
In 1825, Chevreul and JL Gay-Lussac took a patent for the manufacture of the stearic acid candle. Chevreul was awarded a 12,000 gold francs prize by the Society for the Advancement of Industry.
From 1821 to 1840, Chevreul was also examiner of chemistry at the Ecole Polytechnique.

In 1824, he was appointed by Louis XVIII director of the dyeing department at the Manufacture Royale des Gobelins, where he spent a further 61 years of his life. He made important discoveries, both in the chemistry of dyeing and in the physics of color and color effect, which are documented in great works, “Leçons de chimie appliquée à la teinture” (1828-1831) and “De la loi du contraste simultané des couleurs et de l’assortiment des objets colorés”. The latter work, published in Paris in 1839, was edited in London in 1958 as “The laws of contrast of colors”. This new concept had a large influence in the world of art, since it led directly to the development of Pointillism and Divisionism by neo-impressionists such as Georges Seurat and Paul Signac. These pioneer artists found the scientific basis for the division of tones in Chevreul’s principles and limited their palettes to Chevreul’s circle of fundamental colors.

At 97, in 1883, he retired as Director of the Dye Works of the Gobelins, but he continued as professor. 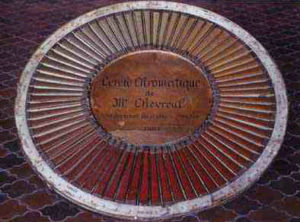 In 1830, he succeeded Vauquelin (retired 3 years earlier) in the chair of chemistry at the Museum and held this position for the remainder of his life.

In 1864, Chevreul became Director of the Museum and held this position until 1879 when he was 93 years old. In 1880, at 95, he finished for the 50th time his lectures (totally 2,000  lectures) at the Museum on application of chemistry to organized bodies.

Chevreul made also important works in agronomy. He was elected in 1832 at the Royal Society of Agriculture (which became the Academy of Agriculture) and became its president in 1849 until his death.

In 1886, his centennial jubilee was a remarkable demonstration in which Chevreul participated with bodily and mental vigor. 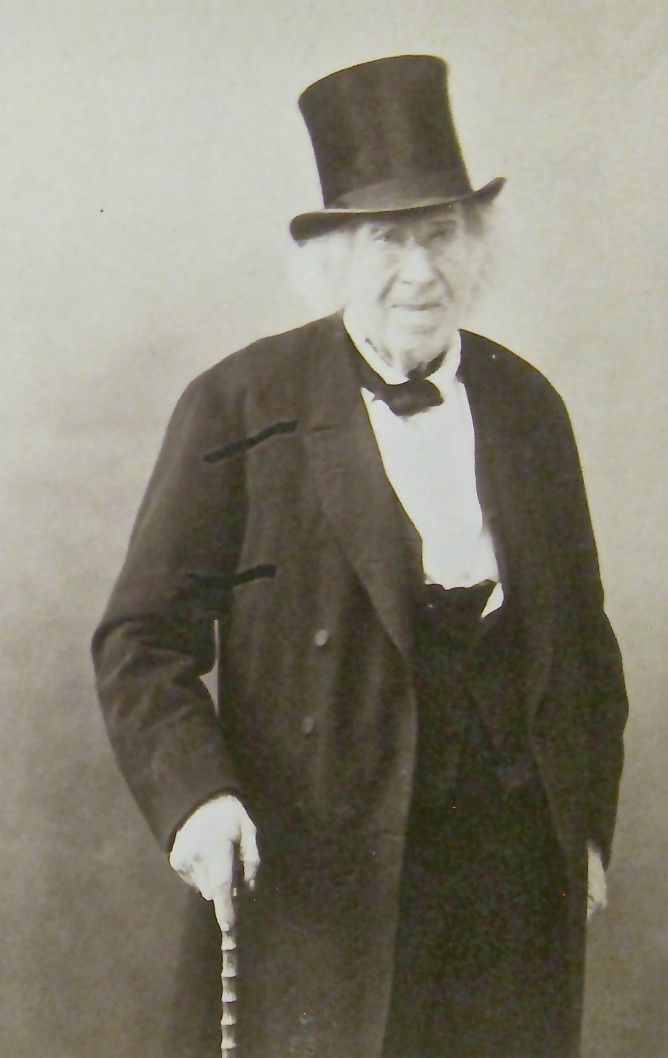 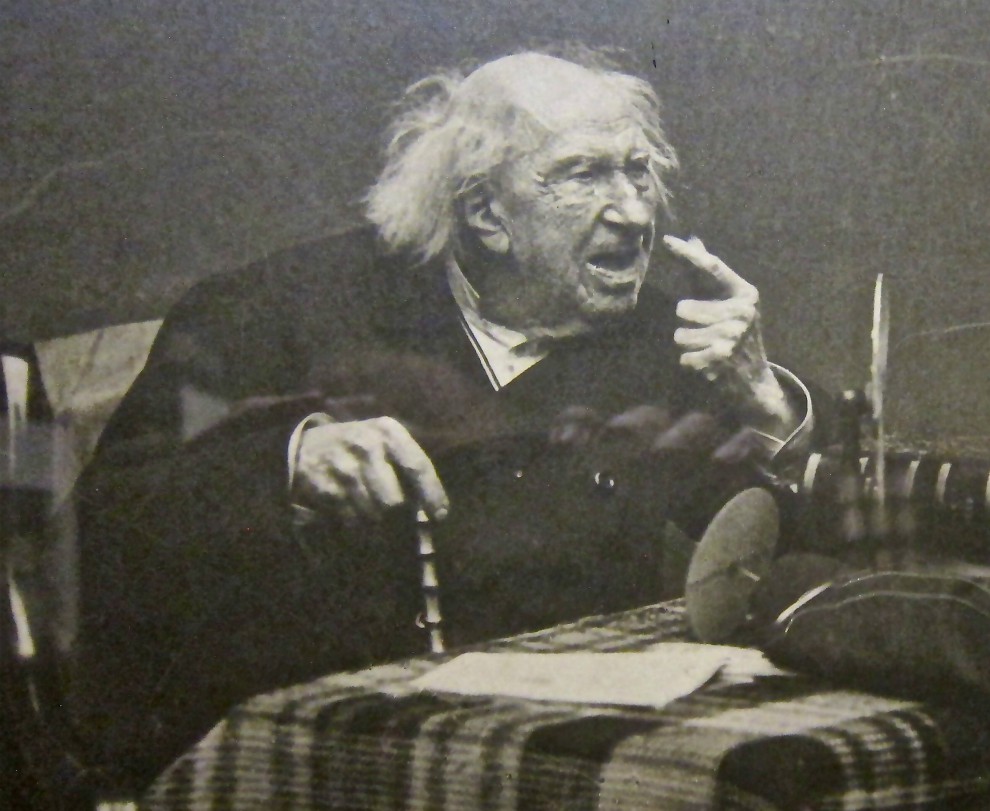 A medal was edited in 31 august 1886 and dedicated with “La jeunesse française au doyen des étudiants”.

In 1889, two years and seven months after his centennial jubilee, his funeral was a national event and the occasion of paying great honor to his memory.

Chevreul also took part in many of the philosophical debates of the 19th Century. He was a strong proponent of skepticism and materialism and was appointed by the Academie des Sciences to investigate several psychic phenomena including divining rods and pendulums. He performed experimental studies on the pendulum’s astonishing properties in 1812 and published his results in 1833 as an open letter to the famous physicist André M Ampère. In 1854 he published a book “Of the Divining Rod, the “Explorer’ Pendulum and Turning Tables, From the Point of View of History, Critique, and the Experimental Method, Mallet-Bachelier, Paris”. He produced also a book on scientific methodology, “De la méthode expérimentale” (1870), five years after Claude Bernard published his famous “Introduction à la médecine expérimentale”.

While Chevreul will not occupy as high a place in the history of chemistry as other scientists of his time such as Dumas, Liebig, Wurtz, Oersted, Berzelius, Berthollet, Gay-Lussac, Ampère or Berthelot, he remains one of the best examples of the fusion of fundamental research and technical practice which resulted in improvements important enough to affect the life of humanity.