Long-chain aldehydes are found in free form, but also in the form of vinyl ether (known as alk-1-enyl ether) integated in glycerides and phospholipids (plasmalogens).
The free aldehydes can be as fatty acids saturated or unsaturated. They have a general formula CH3(CH2)nCHO with n=6 to 20 or greater. The most common is palmitaldehyde (hexadecanal) with a 16 carbon chain.
trans-2-Dodecenal (eryngial) was identified as the main anthelmintic compound in Eryngium foetidum (Apiaceae) (Forbes WS et al., Parasitology 2014, 141, 269). This fatty aldehyde has also been shown to be responsible of the antiepileptic and other therapeutic activities of cilantro (Coriandrum sativum), another Apiaceae (Manville RW et al., FASEB J 2019, 33, 11349). It was demonstrated that t2-dodecenal is a highly potent KCNQ channel (neuronal voltage-gated potassium channel subfamily Q) activator. Curiously, Eryngium foetidum (culantro or Mexican coriander) and cilantro are used extensively and in ancient times in folk medicine as an anticonvulsant or antiepilectic. These data suggest a rich target profile for plant extracts in treating a variety of neuronal hyperexcitability disorders, such as the epilepsies, acute pain, neuropathic pain, migraine pain and some neurodegenerative and psychiatric disorders.

It must be noticed that an aldehyde function may be found at a terminal (ω) position while an acid function is present at the other end of the carbon chain (oxo fatty acids). These compounds have important signaling properties in plants.

Long-chain aldehydes have been described in the waxes which impregnate the matrix covering all organs of plants (Vermeer CP et al., Phytochemistry 2003, 62, 433). These compounds forming about 7% of the leaf cuticular waxes of Ricinus communis were identified as homologous unbranched aldehydes ranging from C22 to C28 with a hydroxyl group at the carbon 3. Long-chain 5-hydroxyaldehydes with chain lengths from C24 to C36, the C28 chain being the most abundant, were identified in the cuticular wax of Taxus baccata needles (Wen M et al., Phytochemistry 2007, 68, 2563). Long-chain aliphatic aldehydes with chain-length from C22 to C30 are also present in virgin olive oils, hexacosanal (C26) being the most abundant aldehyde (Perez-Camino MC et al., Food Chem 2012, 132, 1451).
Polyunsaturated aldehydes are among the most studied allelopathic compounds as they are commonly released into the aquatic envi-ronment by different phytoplankton species. Diatom-released polyunsaturated aldehydes were observed to affect phytoplankton community dynamics and structure, and showed inhibitory effects on the reproduction and development of marine invertebrates. The production of aldehydes by several Mediterranean macroalgae has been investigated providing the first evidence of potential allelochemical activity (Pezzolesi L et al., Phytochemistry 2021, 189, 112826). Results highlighted the potential production by macroalgae of a variety of aldehydes. Some species (i.e. Dictyopteris polypodioides and Ulva cf. rigida) were found to produce higher PUAs amounts than other.

Aldehydes may be produced during decomposition of fatty acid hydroperoxides following a peroxidation attack. Several aldehydes (hexanal, heptanal..) belong to aroma compounds which are found in environmental or food systems (see the website: Flavornet). Aldehydes (mono- or di-unsaturated) with 5 to 9 carbon atoms are produced by mosses (Bryophyta) after mechanical wounding (Croisier E et al., Phytochemistry 2010, 71, 574). It was shown that they were produced by oxidative fragmentation of polyunsaturated fatty acids (C18, C20). Trans-2-nonenal is an unsaturated aldehyde with an unpleasant odor generated during the peroxidation of polyunsaturated fatty acids. It participates to body odor and is found mainly covalently bound to protein in vivo (Ishino K et al., J Biol Chem 2010, 285, 15302).
Tthe recognition of odorous signals was demonstrated to be accomplished by several subsystems (olfactory receptors) of the global olfactory system. These results led to the hypothesis that in mammals the OR37 receptor subsystem may specifically recognise chemical compounds. In the search for suitable ligands it was found that these receptors are activated by long-chain aliphatic aldehydes (Bautze V et al., Chem Senses 2012, 37, 479). It was found that each of the OR37 receptor subtypes selectively responds to a different but very similar aldehyde, which differs only in chain length. Pentadecanal was found to be the best ligand for OR37A, hexadecanal for OR37B and heptadecanal for OR37C. A more recent study has demonstrated that hexadecanal appears to foster aggressive behavior in women and blunt it in men. Thus, that molecule expressed by the human body can influence human behavior, specifically the aggressive behavior (Mishor E et al., Sci Adv 2021, 5/47). Thus, women exposed to the aldehyde behaved 19% more aggressively in a special test, whereas men were 18.5% less aggressive.

Fatty aldehydes may be determined easily by TLC or gas liquid chromatography (follow that link). The most common method for the determination of aldehydes involves derivatization with an acidic solution of 2,4-dinitrophenylhydrazine to form corresponding hydrazones followed by HPLC separation and UV–VIS detection. An optimized derivatization procedure for the determination of aliphatic C1-C10 aldehydes has been described (Stafiej A et al., J Biochem Biophys Meth 2006, 69, 15).

Other short-chain aldehydes (octadienal, octatrienal, heptadienal) are produced via a lipoxygenase-mediated pathway from polyunsaturated fatty acids (mainly C16 and C20) esterifying glycolipids in marine diatoms (D’Ippolito G et al., Biochim Biophys Acta 2004, 1686, 100). In nature, processes producing the disruption of phytoplankton cells are viral infection, grazing or/and cell lysis during senescence. Heighteen species of diatoms have been shown to release unsaturated aldehydes (C7:2, C8:2, C8:3, C10:2, and C10:3) upon cell disruption (Wichard T et al., J Chem Ecol 2005, 31, 949). The analyzis of the spatial distribution of the aldehydes produced by the phytoplankton in the Atlantic Ocean surface has shown that the total potential fatty adehyde concentrations ranged from zero to 4.18 pmol from cells in 1 L with, besides octadienal and decadienal, heptadienal being the most common (Bartual A et al., Mar Drugs 2014, 12, 682).

Several short-chain aldehydes were shown to induce deleterious effects on zooplankton crustaceans and thus limiting the water secondary production (birth-control aldehydes) (D’Ippolito G et al., Tetrahedron Lett 2002, 43, 6133). In laboratory experiments, three decatrienal isomers produced by various diatoms were shown to arrest embryonic development in copepod and sea urchins and have antiproliferative and apoptotic effects on carcinoma cells (Miralto A et al., Nature 1999, 402, 173). Later, the copepod recruitment in blooms of planktonic diatom was shown to be suppressed by ingestion of dinoflagellate aldehydes (Nature 2004, 429, 403). It was demonstrated that diatoms can accurately sense a potent 2E,4E/Z-decadienal and employ it as a signaling molecule to control diatom population sizes (Vardi A et al., PLoS Biol 2006, 4, e60). This aldehyde triggered a dose-dependent calcium transient that has derived from intracellular store. Subsequently, calcium increase led to nitric oxide (NO) generation by a calcium-dependent NO synthase-like activity, resulting in cell death in diatoms.

Myeloperoxidase-derived chlorinated aldehydes with plasmalogens has been reported. Thus, the vinyl-ether bond of plasmalogens is susceptible to attack by HOCl to yield a lysophospholipid and an a-chloro-fatty aldehyde (Albert CJ et al., J Biol Chem 2001, 276, 23733). For example, 2-chloro-hexadecanal is formed by HOCl attack on the plasmalogen 1-O-hexadec-1′- enyl-sn-glycero-3-phosphocholine. Similarly, 2-chloro-octadecanal is formed from 1-O-octadec-1′-enyl-sn-glycero-3-phosphocholine.

Long after the demonstration of the presence of iodinated lipids in thyroid (besides iodinated aminoacids), it was shown that the major iodinated lipid formed in thyroid when incubated in vitro with iodide was 2-iodohexadecanal (Pereira A et al, J Biol Chem 1990, 265, 17018). In rat and dog thyroid, 2-iodooctadecanal was determined to be more abundant that the 16-carbon aldehyde. These compounds, which are thought to play a role in the regulation of thyroid function, were recently shown to be formed by the attack of reactive iodine on the vinyl ether group of PE plasmalogen. This attack generates an unstable iodinated derivative which breaks into lysophosphatidylethanolamine and 2-iodo aldehydes (Panneels V et al, J Biol Chem 1996, 271, 23006).

In some bacteria, aldehyde analogs of cyclopropane fatty acids were described.

Several fatty aldehydes are known to have pheromone functions. Studies in African and Asian countries have shown that the use of 10,12-hexadecadienal could be effective for control of the spiny bollworm Earias insulana, a cotton pest. The sex pheromone of the navel orange worm, Amyelois transitella, 11,13-hexadecadienal, is usually used in the control of this citric pest.

Several isoprenoid aldehydes are important in insect biology as pheromones and in botany as volatile odorous substances. Some examples are given below:

These three terpenic aldehydes are produced in large amounts by the mandibular glands of ants and may function as defensive repellents (Regnier FE et al., J Insect Physiol 1968, 14, 955). In contrast, the same molecules have a role of recruiting pheromones in honeybees

Citral, a mixture of the tautomers geranial (trans-citral) and neral (cis-citral) is a major component (more than 60%) of the lemongrass (Cymbopogon flexuosus) oil. Lemongrass is widely used, particularly in Southeast Asia and Brazil, as a food flavoring, as a perfume, and for its medicinal properties (analgesic and anti-inflammatory). It was found that citral is a major suppressor of COX-2 expression and an activator of PPAR a and g (Katsukawa M et al., Biochim Biophys Acta 2010, 1801, 1214)

One important constituent of this group of aldehydes is retinal, one active form of vitamin A involved in the light reception of animal eyes but also in bacteria as a component of the proton pump.

Retinal exist in two forms, a cis and a trans isomer. On illumination with white light, the visual pigment, rhodopsin is converted to a mixture of a protein (opsin) and trans-retinal. This isomer must be transformed into the cis form by retinal isomerase before it combines again with opsin (dark phase). Both isomers can be reduced to retinol (vitamin A) by a NADH dependent alcohol dehydrogenase. Retinol is stocked in retina mainly in an acylated form.

Safranal is a lipids compound isolated from saffron, the spice consisting of the stigmas of crocus flowers (Crocus sativus) and which is the main constituent responsible for the aroma of saffron. It is likely forme by degradation of the carotenoid zeaxanthin. 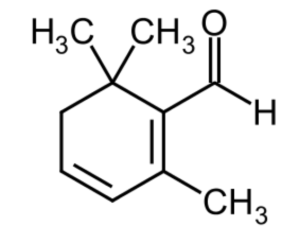 Safranal has an anticonvulsant effect in animal models, it acts also as an agonist at GABAA receptors and exhibits high antioxidant and free radical scavenging activity. with cytotoxicity towards cancer cells in vitro (Escribano J et al., Cancer Lett 1996, 100, 23).