These molecules are also known as coenzyme Q or mitoquinones. They are involved in electron transport in mitochondrial preparations playing an essential role in the oxidation of succinate or NADH via the cytochrome system. They serves not only as a coenzyme but also, in their reduced forms, as antioxidants. They are synthesized de novo in all animal tissues and cannot thus be regarded as vitamins. Ubiquinones are present in all aerobic organisms, plants, animals (the name ubiquinone was proposed with reference to their ubiquitous occurrence) and bacteria, but are absent from Gram-positive eubacteria and the archaebacteria. They were discovered by the Morton’s group (Biochem J 1955, 59, 558) in animal fat but their quinonoid structure was revealed by Crane two years later (Biochim Biophys Acta 1957, 25, 220) in extracts from beef heart mitochondria. The compound had a 2,3-dimethoxy-5-methylbenzoquinone nucleus and a side chain of 10  isoprenoid units and was referred to as coenzyme Q 10 . Later, homologues with 6, 7, 8 and 9 units were isolated from other organisms, bacteria or higher organisms. The main form in man has 10 units but in rat has 9 units. Another system of nomenclature is used: ubiquinone(x) in which x designates the total number of carbon atoms in the side chain, it can be a multiple of 5. Thus, coenzyme Q10 is also named ubiquinone (50). Ubiquinone became the “official” name of the compound in 1975 (IUPAC-IUB commission).
Recent review: “Biochemical, physiological and medical aspects of ubiquinone function” by Ernster L et al. (Biochim Biophys Acta 1995, 1271, 195).

Coenzyme Q is reducible by sodium dithionite or borohydride to its hydroquinone form, and can in turn be reoxidized to the quinone by Ag2O or more slowly by oxygen. The absorption spectra of the two forms are shown below. The quinone form has a strong absorption band at 275 nm which disappears in the reduced form.

Ubiquinone-9: MW 794     Ubiquinone-10: MW 862
Ubiquinones are readily destroyed by heating in alkali , but in the presence of pyrogallol the destruction is minimized.

Idebenone is a synthetic analogue of coenzyme Q10 which has antioxidant properties.Iinitially developed by Takeda Pharmaceutical Company for the treatment of Alzheimer’s disease. it was investigated by the Swiss company Santhera Pharmaceuticals for the treatment of neuromuscular diseases. Several indications have been approveed in some countries and many research are in progress in various nervous pathologies (treatment of neurodegenerative diseases) and skin disorders (Montenegro L et al., Nanomaterials 2018, 8(2). pii: E87).

The presence of that biologically active compound in yam extract likely provides basic evidence for a part of its beneficial effect for menopausal women.

A substituted quinone was isolated in a lipid extract of lucerne by Kofler in 1946. The discovery of ubiquinone and of its role in mitochondrial electron transport stimulated studies of related substances. Crane FL (1959) suggested that this quinone was called plastoquinone because it appeared concentrated in the chloroplasts of higher plants. Rapidly, it appeared that plastoquinone plays a role analogous to that of ubiquinone in mitochondria but associated with the transformation of light into chemical energy. They are also present in algae and cyanobacteria.
The elucidation of the structure of plastoquinone was that of a 2,3-dimethyl-1,4-benzoquinone with a C45 side chain related to the isoprenoid alcohol, solanesol.

Plastoquinone is a yellow crystalline solid (PQ-9 has a MW of 748) soluble in most organic solvents. It has a characteristic UV spectrum with a maximum at 255 nm (molar abs. coeff.: 15700). On reduction (with sodium borohydride) a single maximum of lower intensity at 290 nm (molar abs. coeff.: 3440) is observed.

Several plastoquinone and plastohydroquinone analogues have been described in brown algae (Reddy P et al., Phytochemistry 2009, 70, 250). They differ primarily in the linear terpene chain moiety which has hydroxy and carbonyl groups in various positions. As an example, we give below the structures of the simplest (sargaquinone) and one of the most complex (fallaquinone) described in Sargassum fallax.

Many of these molecules displayed significant antioxidant, potent antiviral or moderate antitumour activities.

Various heterocyclic quinones have been described in sulphur-oxidizing archaebacteria, the benzothiophenoquinones. 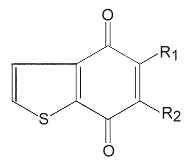 Several species of these quinones are present with menaquinones in the same bacteria. R1 may be -CH3 or -SCH3, and R2 is an isoprenoid chain, saturated or mono6unsaturated, with 3 to 6 isoprenoid units.

tert-Butylhydroquinone is a synthetic aromatic organic compound which is a derivative of hydroquinone, substituted with a tert-butyl group. In foods, It is used as an antioxidant to preserve unsaturated vegetable oils and many edible animal fats. It can be combined with other preservatives such as butylated hydroxyanisole. As a food additive, its E number is E319. While it has been determined as safe to consume at the concentration allowed in foods, a number of studies have shown that prolonged exposure to very high doses of butylhydroquinone may be carcinogenic. 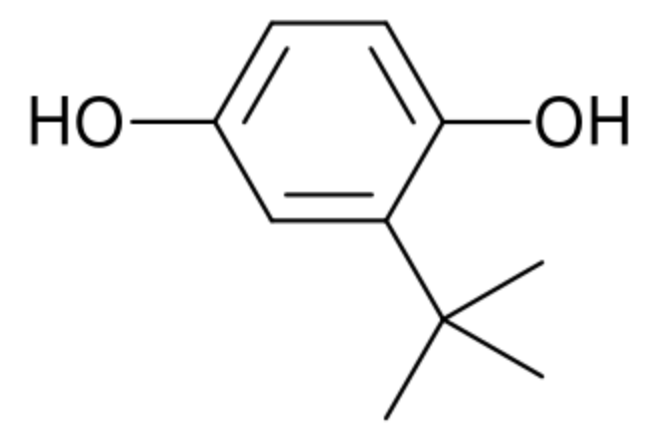 These are groups of compounds containing two carbonyl groups on a saturated hexacyclic aromatic ring system (benzene ring), usually at ortho or para posi- tions (monocyclic). Quinones exhibit numerous biological activities such as neurological, antibacterial, antiplasmodial, antioxidantal, trypanocidal, antitumor, and anti-HIV, and these activities have been proven to be related to the redox properties of their carbonyl functions.

Naturally occurring quinones have been reported with a range of activity against insect, fungal, weed and other agricultural pests (Mozaina K et al., J. Agric. Food Chem 2008, 56, 4021). Quinones are widespread in the defensive secretion constituents of arthropods and the methylated quinones found in opilionids are of more limited occurrence (Eisner T et al., J. Chem. Ecol 1977, 3, 321). Methyl- and ethylquinones are well established components of the defensive secretions in many arthropods and their presence vary between species and even sexes (Gunbilig R et al., Scientific Reports 2009,, 3, 1865) 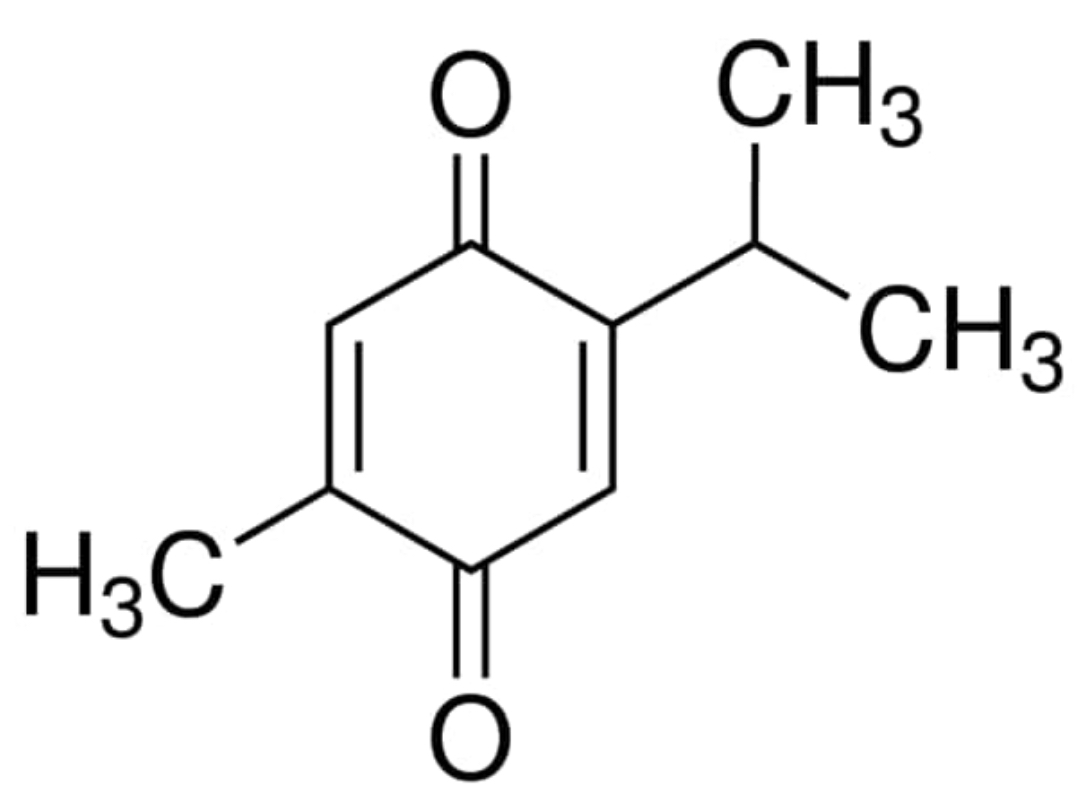 It was proposed as a promising natural compound with potential benefits for COVID-19 prevention and cure (Badary OA et al., Drug Des Devel Ther 2021, 15, 1819).
Thymoquinone has also promising properties including anticancer and chemosensitizing peculiarities. Its anticancer power is accomplished by several aspects; including promotion of apoptosis, arrest of cell cycle and ROS generation (Mahmoud YK et al., Biomed Pharmacother 2019, 115, 108783). It is also found in the Black Cumin (Nigella sativa) seeds. The black cumin seeds have long been used as a spice in the Mediterranean region and in Western Asian countries including India, Pakistan and Afghanistan. Investigations on the extracts of black cumin have indicated potent antitumor activi- ties without serious toxic effects.