Although the oxidation (bleaching) of carotenoids has long been recognized as a property of soy bean meal, the concept of a lipoxygenase activity was proposed in 1932 when André E et al. suggest the presence of a lipid oxidase in the soya beans (André E et al., C R Acad Sci Paris 1932, 194, 645). Four years later, it was demonstrated, using the Warburg technique for measuring gas exchanges, that proteins present in Lupinus albus seeds were also able to oxidized a variety of fats (Craig FN, J Biol Chem 1936, 114, 727). More precisely, a “carotene oxidase” was shown to be present in aqueous extracts of soy beans, its action being dependant upon the presence of unsaturated fats or fatty acids (Sumner  JB et al., Enzymologia 1939, 7, 130). Soon after, it was shown that unsaturated fats increased their peroxide number in the presence of soy bean meal (Sumner JB et al., J Biol Chem 1940, 134, 531).

Hydroperoxides : Various lipoxygenases in plants and animals produce several hydroperoxides (hydroperoxy eicosatetraenoic acids or HpETE) from C18 and C20-fatty acids (mainly arachidonic acid). These regio-specific enzymatic reactions between oxygen and polyunsaturated fatty acids formed new compounds, named oxylipins, which are most frequently with the S-configuration (5-HpETE, 12-HpETE or 15-HpETE). The plant C18 fatty acids, linoleic acid and linolenic acid, can be converted by  the enzymes a-dioxygenase, 9- or 13-lipoxygenase, giving rise to a multitude of oxylipins. These compounds are involved in stress responses. Some oxylipins have direct antimicrobial properties, whereas others may act as regulators of plant defense. Thus, methyl jasmonate was directly proved to be essential for plant defense against the fungal root pathogen Pythium mastophorum in Arabidopsis (Vijayan P et al., Proc Natl Acad Sci 1998, 95, 7209).

An essential structural element of the C20-fatty acid for the enzymatic insertion of molecular oxygen is the 1,4-pentadiene with the concomitant rearrangement of the double bond to form a 1,3-conjugated diene which absorbs strongly around 236 nm.

These HpETE are formed in a variety of tissues and may undergo reactions dependent upon the HpETE concerned. These reactions lead to hydroxy products (HETE) via reduction by glutathion peroxidases, leukotrienes (LT) via isomerisation and dehydration, prostaglandins (PG), dihydroperoxy compounds (DiHpETE) and lipoxines (Lx) by isomerisation. HpETE are central intermediates but they also possess their own biological activities.

Furthermore, 12-HETE may be transformed into more potent molecules, e.g. 10,11-dihydro-12-HETE.
The HETE are found in many types of cells from invertebrates to humans. They are formed in vessels, epithelia, neuroglia, and germ cells. It was also found that they are able to be incorporated into membrane phospholipids. It has been observed that ionophore-stimulated monocytes generate 15-HETE attached to membrane phosphatidylethanolamine (Maskrey BH et al., J Biol Chem 2000, 275, 33744). It has been also found that, in response to thrombin, human platelets formed 12S-HETE which is partially esterified to phosphatidylethanolamine and phosphatidylcholine, the major part remaining in a free state (Thomas CP et al., J Biol Chem 2010, 285, 6891). The observation of a preferential migration of these HETE-esterified phosphatidylethanolamine suggests a role for these novel lipids in promoting coagulation.
The first monocarbocyclic cyclopropyl-containing oxylipin from a marine organism came as a result of studies on the mechanism of prostaglandin biosynthesis from arachidonic acid by the Caribbean gorgonian Plexaura homomalla (Baertschi SW et al., J Am Chem Soc 1989, 111, 500).

Leukotrienes : The 5-lipoxygenase has received great attention since it initiates the formation of leukotrienes. First, oxygen is inserted at carbon 5 to produce an unstable compound (LTA4). This compound is converted either to LTB4 by a hydrolase or to LTC4 by a combination with a glutathion residue. Further, by cleavage of one L-glutamic acid, LTD4 is formed which may be again converted into LTE4 after removal of one L-glycine residue. LTC4, LTD4 and LTE4 are known as cysteinyl leukotrienes.
They substances are considered as local hormones formed when necessary in response to cell specific hormonal, chemical or immunological stimuli. They are thought to be the mediators of bronchial asthma and allergic diseases. LTD4 has potent chemostatic activities and may have important roles in inflammatory process.

Biology and pathophysiology of leukotrienes have been extensively reviewed (Denzlinger C, Crit Rev Oncol Hematol 1996, 23, 167).
The cysteinyl leukotrienes (LTC4, LTD4, LTE4) activate contractile and inflammatory processes via specific interaction with seven transmembrane domain G protein-coupled receptors. Pharmacological studies enabled the identification at least two subtypes of receptors based on agonist and antagonist potency for biological responses and which are differently distributed among tissues (Evans JF, Prostaglandins Other Lipid Mediat 2002, 68-69, 587). On the other hand, LTB4 was reported to be a ligand of the nuclear receptor PPARa (Devchand PR et al., Nature 1996, 384, 39).

Similarly with isoprostanes, B4-isoleukotrienes have been described after in vitro free radical oxidation (Harrison KA et al., J Biol Chem 1996, 270, 17273). These isomers of leukotriene B4 were shown to exhibit biological activity (elevation of intracellular calcium) via the leukotriene B4 receptor.

Polyhydroxy fatty acids : It has been reported dozens of polyhydroxy fatty acids produced by multiple lipoxygenation reactions of arachidonic acid. For example, 5,12-DiHETE is formed in leukocytes by double oxygenation of 20:4(n-6) via 5- and 12-lipoxygenases. This molecule is not biosynthetically related to LTB4, although it bears hydroxyl groups at C5 and C12. It has an opposite configuration at C12 and another conjugated triene configuration. DiHETE may be formed by 5-, 6-, 8-, 12-, 14-, 15-, 19-, and 20-lipoxygenases. To complicate the pathways, some, as 5,6- or 5,12-DiHETE, were shown to be formed also by nonenzymatic hydrolysis of LTB4 or LTA4, respectively. They are produced in leukocytes, eosinophiles or platelets. They are generally related with muscle contraction, cell degranulation, superoxide production and chemotactism. They are detected and quantified owing to their strong UV absorption (conjugated triene) at about 270nm (e: 30,000-50,000). Some of the best known DiHETE are depicted below.

Some docosatrienes (docosanoids) are acyclic lipoxygenase metabolites of 22-carbon atom polyunsaturated fatty acids (DHA) containing a conjugated triene with two secondary allylic alcohols. The two main metabolites are protectin D1 and its regioisomer maresin 1, they are involved in the resolution and more specifically the termination of the inflammation process.

Lipoxins (LX) : they may be also formed from several polyhydroxy fatty acids. They contain a conjugated tetraene structure responsible for their strong absorbance at 300 nm (e= 50,000). They can be formed through several metabolic pathways including a combination of 5-, 12- or 15-lipoxygenases, peroxidase, dehydrase and hydrolase. LXA4 (5, 6, 15-trihydroxy) and LXB4 (5, 14, 15-trihydroxy) are the major lipoxins which display original activity profiles. Thus, they stimulate lipid remodeling in neutrophiles, contraction of lung muscle, protein kinase C activation, inhibition of inositol P3 production or microvascular bed dilation.

Hepoxilins : A new bioactive group of hydroxy and epoxy fatty acids has been identified after incubation of blood platelets with arachidonic acid (Walker IC et al., Prostaglandins 1979, 18, 173). These derivatives were named hepoxilin. Several types were described, epoxy arachidonic acid being either mono- or tri-hydroxylated. Hepoxilin A3 is shown below. 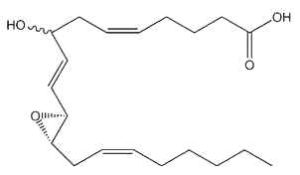 Jasmonate was found in 1962 in Jasminum oil (Demole E et al., Helv Chim Acta 1962, 45, 675) and jasmonic acid was isolated in 1971 in a fungus culture (Aldridge DC et al., J Chem Soc 1971, C, 1623). Subsequently, both of these compounds, as well as a number of homologues, have been shown to be widespread in the plant kingdom and in some fungi. The most ancient and the only prokaryotic organism known to synthesize jasmonic acid form linolenic acid is the cyanobacterium Spirulina (Ueda J et al., Bull Univ Osaka Prefect Ser B 1991, 23, 103). It is noteworthy that cyanobacteria are believed to have given rise to some eukaryotic chloroplasts. Except these organisms, jasmonic acid occurs ubiquitously in organisms that have plastids. Jasmonic acid has been reported as constituent of the Black Sea red alga, Gelidium latifolium (Krupina MV et al., Z Naturforsch 1991, 46C, 1127).
Jasmonate is structurally related to cis-jasmone (same but without the carboxyl group), all are cyclopentyl fatty acid derivatives, both being fragrant components of essential oils of jasmine(methyl jasmonate makes up some 2-3% of jasmin oil). Jasmone was the first component of the jasmonate family discovered in jasmine flower oil (Hesse A et al., Chem Ber 1899, 32, 2611) but its structure was determined forty years later (Ruzicka L et al., Helv Chim Acta 1933, 16, 1208).

Jasmone is a product of the catabolism of jasmonic acid (Koch T et al., Helv Chim Acta 1997, 80, 838) and is well known as a component of plant volatiles (jasmin, jonquil, peppermint oil, tea flavor), its release being induced by damage during insect herbivory. It was found to be electrophysiologically active and also to be repellent in laboratory and field studies (Birkett MA et al., PNAS 2000, 97, 9329). Furthermore, jasmone induced the production of volatile compounds, including the monoterpene ocimene, which affect plant defense, for example by stimulating the activity of parasitic insects.
Jasmonate synthetic pathway from linolenic acid was first proposed in 1983 (Vick BA et al., Biochem Biophys Res Commun 1983, 111, 470). Jasmonate is synthesized via several key enzymes including lipoxygenase, allene oxide synthase, and allene oxide cyclase (octadecanoic pathway). It can be conjugated to amino acids, i.e. leucine, valine, isoleucine (Staswick PE et al., Plant cell 2004, 16, 2117), tryptophane and b-glucoside. Octadecanoids are now considered mainly as wound-inducible compounds elicited by herbivorous attack and are proposed to act as cellular messengers during defense responses (Farmer EE et al., Plant cell 1992, 4, 129; Fliegmann J et al., Biol Chem 2003, 384, 437).
Methyl jasmonate vapor is a powerful signal for the induction of proteinase inhibitor gene expression in the leaves of wounded plants but also of nearby plants, the first precise role attributed to this oxylipin (Farmer EE et al., Proc Natl Acad Sci USA 1990, 87, 7713). These data suggest that volatile methyl jasmonate may play physiological roles (Farmer EE et al., Plant Physiol 1992, 98, 995). Furthermore, the use of jasmonate as a spray has been investigated in a number of systems for the protection of plants from pests and pathogens. Several investigations have shown that jasmonic acid, apart its signaling effect in plants, may also act as a signal in fungi.

Another compound of the jasmonate family, dinor-oxo-phytodienoic acid, has been described in leaves of Arabidopsis and potato (Weber H et al., PNAS 1997, 94, 10473). It differs from jasmonic acid in being formed from a C16 fatty acid (16:3n-3).
It has been shown that a precursor of jasmonic acid, 12-oxophytodienoic acid, is esterified in the sn-1 position of plastid-specific galactolipids (MGDG) and released during wounding experiments. This compound is subsequently transformed into jasmonic acid, the true mediator of plant herbivore defense (Stelmach BA et al., J Biol Chem 2001, 276, 12832).

The monoglycoside derivative of tuberonic acid was shown to be the natural substance which had a potent tuber-inducing activity in the leaves of potato at a concentration of 0.01 mg/l.
Methyl and ethyl derivatives of tuberonic acid glycoside were described in Jerusalem artichoke and Salvia officinalis, respectively. This substance is synthesized from epi-jasmonic acid in the leaves and transported down to stolons. The b-glucoside of tuberonic acid is more active than the free acid and suggests that conjugated fatty acid metabolites may play an important role as natural plant regulators (Farmer EE, Plant Mol Biol 1994, 26, 1423).

Cucurbic acid is a jasmonic acid analogue with 12 carbon atoms and a hydroxylated cyclopentane cycle which has similar properties as jasmonic acid.

An extensive review on the various jasmonates, their activities and metabolism has been released by Beale MH et al (Nat Prod Rep 1998, 15, 533).

Bacillariolides : Novel eicosanoids have been isolated from the wild and cultured cells of the diatom, Pseudo-nitzschia multiseries, a causative organism of so-called amnesic shellfish poisoning (Wang R et al., J Chem Soc, Chem Commun 1990, 413). Two arachidonic acid derivatives found in the cells have cyclopentane and lactone rings. One of them is shown below.

Bacillariolide I is known to possess significant inhibitory activity against phospholipase A2 and is not at the origin of Pseudo-nitzschia toxicity (Shimizu Y, Annu Rev Microbiol 1996, 50, 431). It was shown that the same diatom excretes in the culture medium a C12 metabolite (bacillariolide III, side chain of 5 carbon atoms) which is likely formed by the cleavage of bacillariolide I (Zheng N et al., Chem Commun 1997, 399).