They have 20 carbon atoms and are derived from geranylgeraniol pyrophosphate.
They are of fungal or plant origin and are found in resins, gummy exudates, and in the resinous high-boiling fractions remaining after distillation of essential oils. However, unequivocal evidence was provided for de novo geranylgeraniol biosynthesis in mammals (Shidoji Y et al., J Lipid Res 2019,  60, 579).
The rosin remaining after distilling pine turpentine, for instance, is rich in diterpenoids. In ancient times, conifer exudates were used for caulking boats and waterproofing ropes. Resin secretion is also recognized to be part of the resistance mechanism conifers employ against bark beetles and their associated pathogenic fungi. Diterpenoid groups that are physiologically active include: vitamin A  activity (retinol), phytohormones that regulate plant growth and germination, e.g. gibberellin, fungal hormones that stimulate the switch from asexual to sexual reproduction, e.g. trisporic acid; disease resistance agents (phytoalexins), e.g. casbene and podocarpic acid, the anticancer drug, taxol, from the bark of the yew tree, the cancer promoter, phorbol, and natural cannabinoids.
The diterpenes have exceptionally open chain, as found in geranylgeraniol or phytol which forms a part of chlorophyll and the side chain of vitamin E and vitamin K, and crocetin which is a diacid diterpenoid and the lipid part of the crocins, glycosylated derivatives present in saffron.

Examples of diterpene substances are given below : 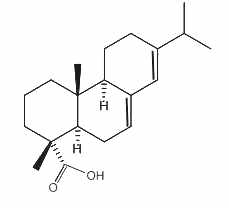 Cembrene (the simplest form of the cembranoid family) is a type of macrocyclic diterpene consisting of four isoprene units bonded ‘head to tail’. It was firstly found in the oleoresin secreted from the trunk of a pine tree. They are mainly found in plants of the Nicotiana and Pinus genera, as well as in soft coral and other marine organisms.
All cembranoids feature a 14-carbon macrocyclic skeleton. About 90 naturally occurring cembranoids have been isolated from tobacco. The chemical structures, biosynthesis, and bioactivities of tobacco cembranoids have been reviewed (Yan N. et al. Indust Crops Prod 2016, 83, 66). Tobacco cembranoids are known to display antimicrobial, anti-tumour and neuroprotective properties, which make them excellent templates for the future development of drugs to treat AIDS, cancer and neurodegenerative diseases. A review discusses and summarises their antimicrobial, insecticidal, cytotoxic and neuroprotective activities (Yan N et al., Biomolecules 2019, 9: 30).
There is a considerable number of publications in the field of cembranoids of Boswellia species. The chemistry (isolation and chemical structures as well as synthetic studies), biogenesis and bioactivity of the reported cembranoids has been reviewed (Al-Harrasi A et al., Phytochemistry 2021, 191, 112897).

Abietic acid is an irritant compound present in pine wood and resin. It is the most abundant compound present in rosin, the solid fraction of the oleoresin of coniferous trees. It is mainly used to make lacquers and varnishes and metal resinates. These resinates are produced in reacting abietic acid (or a similar compound) with a metal salt (gold, indium, nickel, palladium, platinum, silver …) and used in a wide variety of applications where high purity metals in organic solution form is needed (gravure printing inks, vitrifiable colors, antifouling agent, dryers for paints and varnishes …).

Communic acids are a group of diterpenes with labdane skeletons found in many plant species, mainly conifers, predominating in the genus Juniperus (fam. Cupresaceae). They are mainly founded in leaves, fruits, and bark. Five communic acids have been described to date, they differ in the location of the double bonds and the orientation of the carboxyl group. Trans-communic acid is the most common (Barrero AF et al., Molecules 2012, 17, 1448). 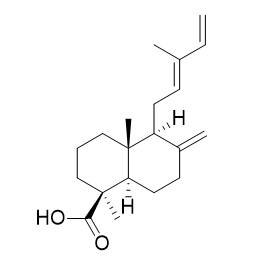 It was abundtly demonstratd that they have different biological activities (anti- bacterial, antitumoral, hypolipidemic, relaxing smooth muscle, etc.).
Among the various compounds of Korean red pine (Pinus densiflora) needle, 4-epi-trans-communic acid was isolated and shown to inhibit angiotensin converting enzyme (ACE) and induce p-Akt in human umbilical vein endothelial cells (Park J et al., J Med Food 2021, 24, No. 1). These results demonstrate that this isomer may be at the origin of other compounds effective for preventing hypertension.

Caulerpol appears to be found in most species of the alga of the genus Caulerpa, usually as the dominant constituent of the crude extract. The isolation of caulerpol from Caulerpa brownii was of particular importance as it was the first compound with a retinol carbon skeleton (related to vitamin A) isolated from a plant source and was later shown to be easily synthesized from (S)-(−)-α-cyclogeraniol (Masaki Y et al., Chem Lett 1978, 1203).

A series of meroterpenoids isolated from the brown alga Cystoseira usneoides have been shown to exhibit anti-inflammatory and antioxidant activities. Among those, amentadione, a meroditerpenoid, showed radical-scavenging activity and demonstrated a significant role in reducing the production of TNFα in LPS-stimulated THP-1 human macrophages (De los Reyes C et al., J Nat Prod 2016, 79, 395). Further research have shown that is could be also an efficient osteoarthritis protective agent (Araujo N et al., Marine Drugs 2010, 18, E624).

The chemical study of the alga Rugulopteryx okamurae of the Family Dictyotaceae has led to the isolation of several original diterpenoids (Cuevas B et al., Marine Drugs 2021, 19, 677). Among them, rugukadiol A exhibits an unprecedented diterpenoid skeleton featuring a bridged tricyclic undecane system. It significantly inhibited the production of the inflammatory mediator NO in LPS-stimulated microglial cells and strongly inhibited the expression of Nos2 and the pro-inflammatory cytokine Il1b in two immune cell lines.

Halogenated tricyclic diterpenes have been extracted from the red alga Sphaerococcus coronopifolius collected from the coastline of the Ionian Sea in Greece (Smyrniotopoulos V et al., Mar Drugs 2020, 18, 29). Among them, one, a methoxy derivative of hydroxy-dihydro-sphaerococcenol, was shown to possess a potent in vitro antitumor activity against one murine and five human cancer cell lines with mean IC50 values 15 and 16 μM, respectively. 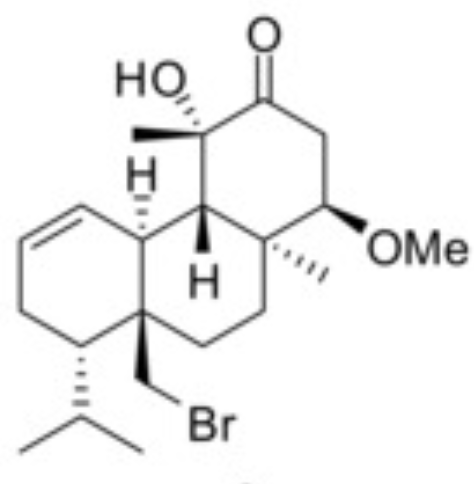 Tanshinones are abietane diterpenes, isolated mainly from Salvia miltiorrhiza (Lamiaceae), a plant largely used in traditional Chinese medicine for the treatment of cardiovascular and inflammatory diseases. Among them, tanshinone I is an apoptose inductor and displays several anticancerous biological properties (Y. Dong et al., Nat Prod Rep 2011, 28, 529). Several analogues have been synthesized for clinical trials.

Steviol is the aglycone of stevia‘s sweet glycosides, one of them being formed by replacing one hydrogen atom (bottom) with glucose via an ester link, and another hydrogen atom (top) with a disaccharide (glucose and rhamnose). The steviol glycosides are responsible for the sweet taste of the leaves of the stevia plant (Stevia rebaudiana, Asteraceae). These compounds are 40 to 300 times sweeter than sucrose. They are developed to be used in sweet drinks. 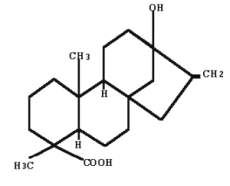 Retene is present in tars obtained by distillation of resinous wood, it is an important pollutant eliminated by the paper factories. This diterpene is present in geological sediment where it is formed by diagenesis from abietic acid, several intermediates having been recognized (Wakeham SG et al., Geochem Cosmochim Acta 1978, 42, 289). Thus, with cadalene (sesquiterpene), retene, a diterpenoid dehydrogenation product, is used in paleobotanic to estimate the importance of ancient pine forests.

Gibberellins are a family of compounds, over 130 members exist whose structures and occurrence can be found on the web. The most important in plants is gibberellin A1 which is responsible for stem elongation. The most widely available compound is gibberellic acid (one double bond in the right cycle). Among the physiological properties, gibberellins are involved in stem growth, seed germination and fruit setting and growth.

Dehydroleucodine was isolated from Artemisia douglasiana, a popular medicine in Argentina and was shown to have several physiological and therapeutic properties : anti-proliferative activity in G2 phase (Lopez ME et al., Protoplasma 2002, 219, 82), cytoprotective agent for gastric ulcers and a general antioxidant. 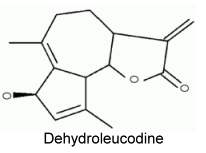 Cafestol and kahweol are present in high concentrations (up to 18% diterpene esters) in the oil derived from coffee beans. The only difference between cafestol and kahweol is an extra double bond present in the second cycle of kahweol. These diterpenes are esterified with one fatty acid (C14 to C24), palmitic and linoleic acids being the major esterified fatty acids (Folstar P et al., Lebensm Wiss Technol 1975, 8, 286). Terpenes were also shown to induce an elevated plasma cholesterol content in human (Boekschoten MV et al Nutr J 2003, 2, 8). 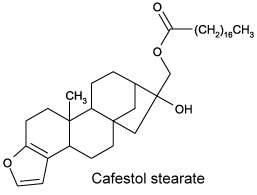 Phorbol is a diterpene isolated in 1934 from croton oil (seeds of Croton tiglium). Various fatty acid esters of phorbol have important biological properties, the most notable of which is the capacity to act as tumor promoters through activation of protein kinase C as they mimic diacylglycerols. The most common phorbol ester is phorbol-12-myristate-13-acetate (PMA), which is used as a research tool in models of carcinogenesis. 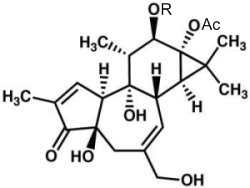 Tuberculosinol, and some analogues can be considered as virulence factors in Mycobacterium tuberculosis, a microorganism that causes tuberculosis illness, a major source of morbidity and mortality worldwide. These compounds could be targets in a new route to anti-infective therapy. They are being evaluated as biomarkers for tuberculosis (Roncero AM et al., Nat Prod Rep 2018, 35, 955). 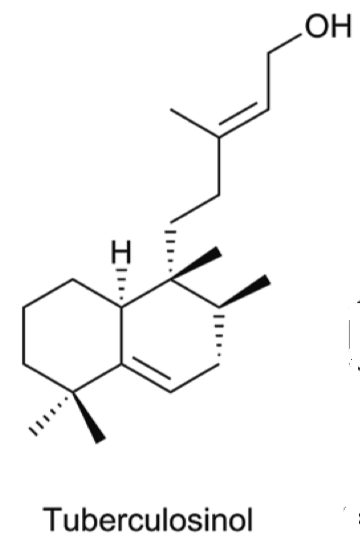 The manool diterpene, found in abundance in Salvia officinalis L., has been shown to display a selective cytotoxic effect against murine melanoma cells (Nicolella HD et al., J Nat Prod 2022, 85, 2, 426) and a protective activity against the induction of DNA damage in human hepatocarcinoma cells (HepG2) (Nicolella H D et al., Food Chem. Toxicol. 2014, 72, 8). Salvia officinalis is a perennial woody subshrub native to the Mediterranean region that is commonly used as a condiment and as an anti-inflammatory, antioxidant and antimicrobial agent due to its biological activities. 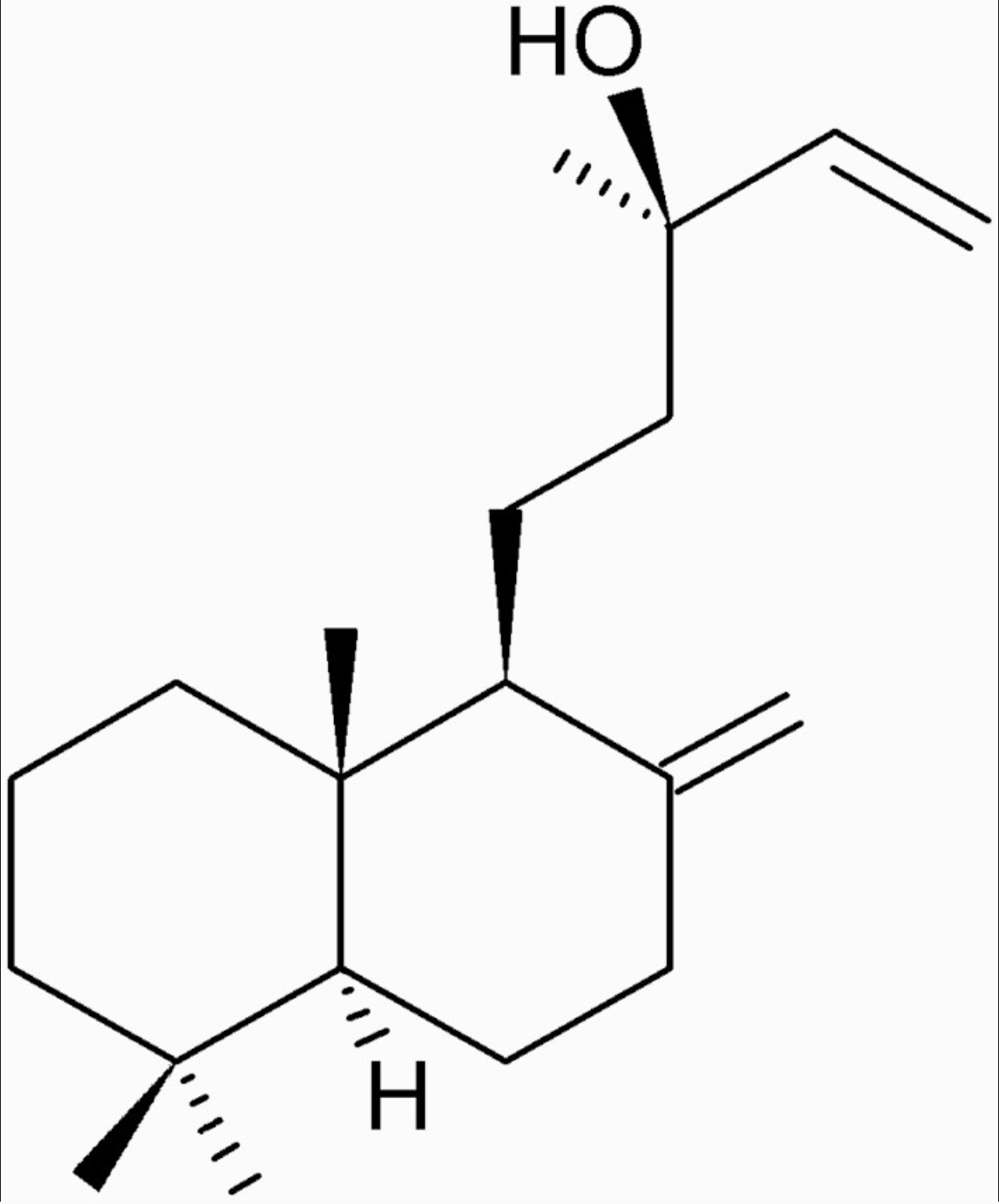 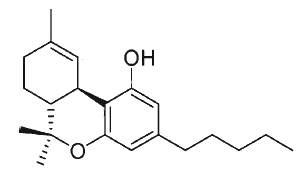 Some diterpènes (Kanakugiol, Kingidiol) present in various plants have been shown to disrupt the receptor complex of insect juvenile hormone (Lee SH et al., PNAS 2015, 112, 1733). These results indicate that newly discovered compounds could be used as the starting material for development of novel insecticides.

Andrographolide is a diterpene of the labdane family isolated from the stem and leaves of Andrographis paniculata (Acanthaceae, native to India and Sri Lanka). It has been studied for its effects on cell signaling, immunomodulation, and stroke. A study has shown that A. paniculata plant extract has anti-diabetic properties, in accordance with its local use for that disease. Andrographolide has also the property to help recover the cognitive decline in a rodent model of in a natural model of Alzheimer’s disease (Rivera DS et al., Neurobiol Aging 2016, 46, 204). These important results suggest that Andrographolide could be used in human as a potential therapy for Alzheimer’s disease. 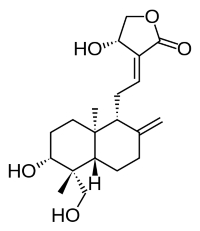 Salvinorin A, isolated from Salvia divinorum, has been proved to produce psychoactive experiences in human, it has been used as an analgesic. 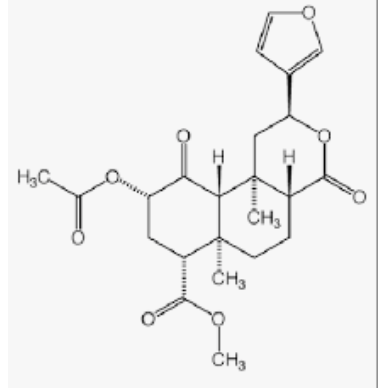 Kahweol, isolated from the beans of Coffea arabica, is a potent inhibitor of osteoclast differentiation, it has also anti-inflammatory and anti-angiogenic properties. 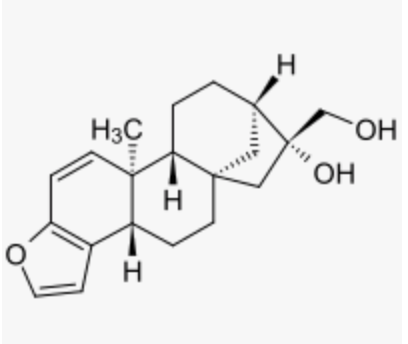