They are the terpenes that have been known for several centuries as components of the fragrant oils obtained from leaves, flowers and fruits. Monoterpenes, with sesquiterpenes, are the main constituents of essential oils. While a few, such as camphor, occur in a near pure form, most occur as complex mixtures, often of isomers difficult to separate. These essential oils have numerous actions, such as allelochemical functions between plants and between plants and predators. A role in wound healing was also observed. An article has reviewed publications and patents concerning the pesticidal activities of frequently studied monoterpenes and their modes of action (Liu Z et al., J. Agric. Food Chem. 2022, 70, 15, 4556).

It is now admitted that boreal forests modify atmospheric particles in emitting a large amount of monoterpenes, a large proportion of these biogenic volatile organic compounds are oxidized by ozone in the atmosphere. They form products with low enough vapour pressure to condense on existing aerosol particles, forming secondary organic aerosol, their strength of emission depending on the tree species and varying according to temperature and light among other variables. Through these productions, forests impact regional and global climates (Spracklen D et al., Phil Trans R Soc A 2008, 366, 4613). In the boreal region of northern Europe, monoterpenes have concentrations ranging from some tens of parts per trillion up to parts per billion (Tunved P et al., Science 2006, 312/5771, 261).

They can be considered as derivatives of 2,6-dimethyloctane.

Among natural molecules, the followings are well known and have several structural isomers.

Defensive role of simple terpenes have been demonstrated as for more complex compounds. Ocimene and linalool (or linalol), (with farnesene), were shown to be produced by de novo biosynthesis in plants damaged by insect herbivories (Paré PW et al., Plant Physiol 1997, 114, 1161). These compounds likely mediate the interaction between herbivores and their natural enemies, attracted by terpenes. β-Ocimene is an example of chemical convergence between plants and insects, suggested to be important in pollinator attraction. This compound is also found in the genitals of male Heliconius butterflies. In Heliconius melpomene, (E)-β-ocimene acts as an anti-aphrodisiac pheromone, transferred from males to females during mating to repel further courtship from subsequent males. It is also found in large amounts in the flowers on which adult H. melpomene feed. This compound, therefore, appears to be carrying out 2 context-dependent functions, attraction to plants and repulsion from mated females (Darragh K et al., PlosOne 2021, 19: e3001022).

Experimentally, a study of Arabidopsis thaliana engineered to overexpress a terpene synthase leading to the emition of large amounts of linalool, which is normally produced only in trace levels. Compared with wild-type A. thaliana, the transgenic plants significantly repelled Myzus persicae aphids (Aharoni A et al., Plant Cell 2003, 15, 2866). That approach may be a solution to the protection of cultivated plants against insect attacks. Recent studies reveal a complex interplay between pollinator attraction and plant defense mediated by linalool and its derivatives. The diverse functions of linalool, ranging from toxin to long distance pollinator attractant are discussed in a review article (Raguso RA et al., Curr Op Plant Biol 2016, 32, 31).

Geraniol, produced by geranium, rose and lemon, has been determined to be also an alarm pheromone of the insect Corythucha ciliata which attacks the sycamore tree (Kuwahara Y et al., J Chem Ecol 2011, 37, 1211).

A great number of orchid species in the New World tropics have coevolved with the insects Euglossini by producing floral scents, highly attractive to insect males over great distances, for efficient pollination. Ipsdienol has been shown to be the main attractive component of the orchid scent (Schorkopf DL et al., J Chem Ecol 2011, 37, 953).

Citral which is a monoterpene aldehyde is a collective term for the E-isomer, named geranial (trans-citral) or citral A and the Z-isomer, named neral (cis-citral) or citral B. These natural stereoisomers occur mainly as a mixture. Citral is present in the essential oils of several plants. It is particularly present in high concentrations in oils of Backhousia citriodora (lemon myrtle) and in several species of Litsea, Ocimum and Lindera. It is also present in lemon and orange but at lower concentrations.

Citral has a strong lemon (citrus) scent and is used as an aroma compound in perfumery. It has also pheromonal effects in acari and insects. The herb Cymbopogon citratus rich in citral was shown to have promising insecticidal and antifungal activity against storage pests (Dubey NK et al., Curr Sci 1997, 73, 22).
A study has demonstrated that Litsea cubeba essential oil, which has a wide range of industrial uses, has also significant anti-tobacco mosaic virus activity (Jiang Y et al., Indust Crops Prod 2022, 183, 114948)
). Citral was shown to be the active components of the oil. Experiments have also indicated that citral can induce plant resistance against fungal diseases.

They are derived from cyclohexane with an isopropyl substituent. The most typical are :

Carvacrol, or cymophenol, is a monoterpenoid phenol. It has a characteristic pungent, warm odor of oregano (Origanum vulgare). It is present in the essential oil of oregano)but also in oil of thyme, pepperwort, and wild bergamot. In vitro, carvacrol has antimicrobial activity against different bacteria and fungi. The essential oil of thyme subspecies contains between 5% and 75% of carvacrol, that of oregano is also rich in carvacrol (50%).

Carvacrol is an activator of the transient receptor potential cation channels V3 (TRPV3) and A1 (TRPA1). The pharmacological effects of pollen extracts have been attributed to carvacrol which inhibits NF-KB factors and thus reduces the level of prostaglandins E2 and increases the production of b-endorphins with inflammation decrease and pain rellief (Shaded AR et al., J Urol 2001, 166, 1738).

Thuyone is best known for being a toxic chemical (the a form is the most active) in absinthe, a product extract from Artemisia absinthium. Its psychedelic effects consecutive to absinthe consumption is disputed. Pharmacologically, thujone acts mainly on the GABA receptors in the brain and exhibits psychoactive response. In many countries the amount of thujone allowed in food or drink products is regulated (in Europe, the maximum level tolerated is 25 mg/l). Other plants containing thujone, such as the coniferous Thuja occidentalis, are used in herbal medicine, mainly for their immune-system stimulating effects. The use of thujone and thujone-containing plant parts for human consumption is currently regulated by the European Parliament and Council and the European Medicines Agency. A review describes the main steps of the biosynthetic route of thujones, their biological activities and their occurrence in the plant kingdom (Németh EZ et al., Phytochem Rev 2020, 19, 405).

Pinene (α- and β- isomers) is the major component of the volatiles emitted by Pinus pinaster (75% of the total). Pinene, as limonene, is an allelochemichal emitted by the roots of Quercus ilex. Camphor and pinene are also allelochemicals emitted by Salvia leucophylla (Nishida N et al., J Chem Ecol 2005, 31, 1187). Pinene is among the more readily available optically active substance (about 30,000 tons/year) and is used for the syntheses of other chemical products (Schwab W et al., Eur J Lipid Sci Technol 2013, 115, 3).

3-Carene consists of fused cyclohexene and cyclopropane rings. It occurs as a constituent of turpentine, with a content as high as 42% depending on the source. Carene has a sweet and pungent odor, best described as fir needles, musky earth, and damp woodlands combination.

Fenchol (1,3,3-trimethyl-2-norbornanol) is an isomer of borneol. It occurs widely in nature. The naturally occurring enantiopure (1R)-endo-(+)-fenchol gives basil its characteristic scent and is also used extensively in perfumery.

Fenchol was recognized as a potential stimulator of the FFAR2 receptor in neuronal cells and it demonstrated protective effects against Aβ-stimulated neurodegeneration (Razazan A et al., Front Aging Neurosci 2021, 13:735933). Thus, stimulation of FFAR2 signaling by fenchol as a natural compound can be a therapeutic approach to ameliorate the pathology of Alzheimer’s disease.

Iridoids are a class of bicyclic monoterpenes found in a wide variety of plants and in some animals. They are often intermediates in the biosynthesis of alkaloids. Chemically, iridoids usually consist of a cyclopentane ring fused to a six-membered oxygen heterocycle, as exemplified by nepetalactone, the active ingredient in catnip (Nepeta spp), plant known for the behavioral effects they have on cats. 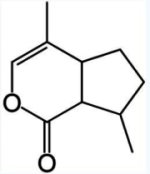 Iridoids are typically found in plants as glycosides, most often bound to glucose.
Cleavage of a bond in the cyclopentane ring gives rise to a subclass known as seco-iridoids.

Iridoids are found in many medicinal plants and may be responsible for the some of their pharmaceutical activities. Isolated and purified, iridoids exhibit a wide range of bioactivities including cardiovascular, hypoglycemic, anti-inflammatory, antispasmodic, antitumor, antiviral, immunomodulator and purgative activities (Didna B et al., Chem Pharm Bull 2007, 55, 159). They are produced by plants primarily as a defense against herbivores or against infection by microorganisms. To humans and other mammals, they have also a deterrent bitter taste. It can also be used as a mosquito repellent. As other terpenes, iridoids may function as protective substances in the animal kingdom, especially for insects. These compounds are obtained from the diet or, as the iridoids of leaf beetles, they are made by the insect itself.

Many monoterpenes possess antitumor activity in animal and cell models. They have also antioxidant properties, g-terpene and hydroxytyrosol being among the most effective.