They are derived from geranylfarnesol pyrophosphate and have 25 carbon atoms (the sester- prefix means half to three, i.e. two and a half.). These relatively rare lipids were first isolated from insect protective waxes and from fungal sources. Now, they are known to be widespread, they have been isolated from terrestrial fungi, lichens, higher plants, insects, and various marine organisms, especially sponges.

They exhibit diverse biological properties such as anti-inflammatory, cytotoxic, anticancer, antimicrobial, and anti-biofilm activities. The structure of the most recent sesterterpenoids and their activities have been reviewed (Wang L et al., Nat prod Rep 2013, 30, 455).

Three examples of sesterterpenes are shown below.

Ophiobolin A, a fungal metabolite and a phytotoxin stimulates the net leakage of electrolytes and glucose from maize seedling roots and was found to be a potent inhibitor of calmodulin-activated cyclic nucleotide phosphodiesterase (Leung PC et al., J Biol Chem 1984, 259, 2742-7).
Gascardic acid is the first sesterterpenes that was isolated in 1965 from the secretion of an insect, Gascardia madagascariensis.

Variously unsaturated and branched sesterterpenes, known as Haslenes, were found in species of diatomaceous algae (Volkman JK at el., Org Geochem 1994, 21, 407). They have 25 carbons and 3, 4 and 5 double bonds. They are widely distributed and abundant in marine sediments. Several haslenes were found to be produced by a pennate diatom Haslea ostrearia according to the culture temperature and were shown to have cytostatic properties (Rowland SJ et al., Phytochemistry 2001, 56, 597). One of them, with only one double bond and known as IP25, is shown below.

This compound has been detected in sea ice in Canadian Arctic and was shown to be a specific biomarker for studying the Quaternary Arctic ice history (Belt ST et al., Org geochem 2007, 38, 16). The monitoring of this lipid appears valuable for reconstruct paleo-sea ice distributions and accurate calibration of climate prediction models (Stein R et al., Org Geochem 2013, 55, 98). The occurrence and variable abundance of several di- and tri-unsaturated C25 haslenes as biomarkers in Antarctic marine sediments have been proposed as a possible proxy measure of paleo sea-ice extent in the Southern Ocean (Smik L et al., Org Geochem 2016, 95, 71).

Cyclic sesterterpenes of the scalarane group have been isolated from a marine sponge, genus Phyllospongia was collected in Philippines waters. The main type was phylloketal but several derivatives were also found (deacetylphylloketal, phyllohemiketal A, phyllolactone E and phyllofolactone B). They have all anti-inflammatory activity suggesting that sponge extracts could be used as a pharmaceutical aid in the treatment of inflammation-related diseases including inflammatory bowel diseases (Lee SM et al., Mar Drugs 2019, 17, 634). 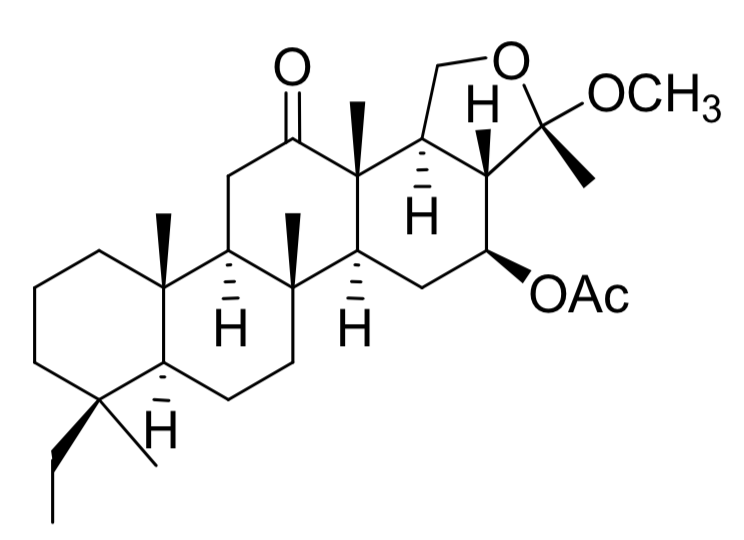