There are essentially two types of phenolic lipid, those in which the side-chain is isoprenoid, as in a-tocopherol, and those which are non-isoprenoid ("polyketide origin") but with a normal carbon chain. The former are described in another site part, the later are described below.

Phenolic compounds are mainly present in plants. This heterogeneous group includes simple phenols and polyphenols as well as their derivatives and may be classified into coumarins, quinones, and flavonoids, by far the largest group of phenolics. Among single-ring compounds those considered as lipids are found specifically in some plants and contain a catechol, a resorcinol or a hydroquinone nucleus alkylated by a normal carbon chain.
They are in general toxic and present mainly in one important plant family, the Anacardiaceae, causing serious allergic dermatitis. This family includes the well known genera: Toxicodendron (poison ivy, poison sumac, Japanese lacquer tree), Anacardium (cashew), and Mangifera (mango). Similar allergenic lipids are also found in Proteaceae (Ginkgo).
Among short-chain alkylphenols, the phenylpropanoids are components found in essential oils. Several were identified in Daucus crinitus (Apiaceae). Thus, isochavicol and derivatives (butyrate, isopropionate and 2-methylbutyrate) have been characterized (Lanfranchi DA et al., J Agric Food Chem 2010, 58, 2174). Isochavicol displayed an interesting antiplasmodial activity.

Some alkylphenols are produced by industrial synthesis to be transformed into polyethoxylate detergents (surfactants, emulsifiers) and pesticides. Because of their man-made origins, these alkylphenols are classified as xenobiotics. The most frequently used are octyl- and nonylphenols, the hydrocarbon chain of eight or nine carbon atoms is attached to the phenol ring in either the ortho, meta, or para position. Moreover, the alkyl chains may be either linear (n-alkyl chain), or branched.

As, in animals, they mimic the effect of estrogens, they are part of the xenoestrogen group. Their potential ecological and human health impact is under study.

In natural phenolic lipids, the common structure of the phenolic group and the alkyl chain is altered  at the level of the aromatic ring which can be a catechol or a resorcinol and of the carbon chain with variations in length and degree of unsaturation. Some parent molecules are based on a hydroquinone instead of a catechol or resorcinol.
Due to their strong amphiphilic character, phenollic lipids can incorporate into erythrocytes and liposomal membranes. The antioxidant, antigenotoxic, and cytostatic activities of these lipids have been reviewed (Stasiuk M et al., Cell Mol Life Sci 2010, 67, 841).
It has been proposed to classify the long-chain phenols into groups of phenolic acids, dihydric, and monohydric phenols. Certain plant species contain all three phenolic types, others only two and certain sources uniquely a single material. An extensive review of these lipids has been released by Tyman JHP (Chem Soc Rev 1979, 8, 499).

These phenolic lipids are also named Urushiol, from the Japanese word for the sap found in several parts of the lacquer tree, kiurushi (Rhus toxicodendrum, poison ivy). This name is sometimes used for all phenolic lipids.
These substances  dry in air to form lustrous varnish, they are used since a long time in China and Japan for lacquering process. They bind to skin and their allergenicity increases with the unsaturation and lengthening of the side chain. 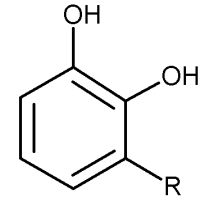 R= 13 to 17 carbon atoms, the chain having 0 to 3 double bonds
according to the plant species.

A new group of lipophilic hydroxytyrosyl derivatives with linear alkyl side chains of variable length have been synthesized from hydroxytyrosol recovered from olive oil wastewaters.

These compounds show strong antioxidant activity and have potential use as functional ingredients to improve the stability of foods (Pereira-Caro G et al., Food Chem 2009, 115, 86)..

Similar compounds but with an ester link between the catechol nucleus and a fatty acid (palmitic, stearic, oleic acids) have been synthesized for their lipophilic antioxidant properties. All derivatives showed better radical-scavenging capacities than did a-tocopherol and ascorbyl palmitate (Torres de Pinedo A et al., Food Chem 2007, 105, 657).

Parent compounds with an additional carboxylic group are found in cashew nut shell (pericarp) (Anacardium occidentalis) and in seeds of Ginkgo tree, the anacardic acids. 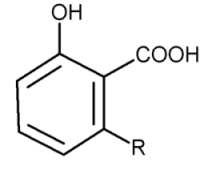 Anacardic acids form a mixture of several closely related organic compounds, each consisting of a salicylic acid substituted with an alkyl chain R (saturated or unsaturated) that has 15 or 17 carbon atoms. The composition of the mixture depends on the species of the plant.  They are lethal to gram positive bacteria, the 15-carbon species with an unsaturated side chain being the most active.
Phenolic derivatives (cardanol) and resorcinolic derivatives (cardol) are present in cashew-nut oil but are mainly obtained during the industrial processing (thermal decarboxylation) of that oil. They have been used to make after polymerization surface coatings, modified rubbers, ion exchange resins, water-proofing materials, and in numerous other products.

The most representative is ginkgolic acid (R = 15 carbon atoms) found in Ginkgo biloba extracts (pulp and leaves). All these compounds are strongly allergenic and was shown to damage DNA (a risk for cancer development) and is toxic to nerve cells (Ahlemeyer B et al., Eur J Pharmacol. 2001, 430) and the immune system. Pharmaceutical-grade Ginkgo extract must contain less than 5 parts per million of ginkgolic acid.

These lipids are formed of a resorcinol (1,3-dihydroxybenzene) group alkylated at the position 5 (-R)  with an odd-numbered carbon chain (non-isoprenoid) of various length (C17 to C27) either saturated (alkylresorcinols) or unsaturated (alkenylresorcinols) with 1 to 6 double bonds. They are very hydrophobic molecules, especially those with the chain exceeding 11 carbon atoms. 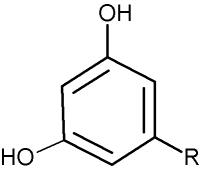 They were first described Ginkgo biloba (Anderson HH et al., Proc Soc Exp Biol Med 1931, 28, 609) and later in several other Anacardiaceae such as in cashew nut shell liquid (Anacardium occidentale) (Symes WF et al., J Am  Chem Soc 1953, 75, 4952), mango latex and peel. In these plants, resorcinol lipids were shown to be strong vesicants causing frequently strong allergic responses. Cardol (5-pentadecyl-1,3-resorcinol) was shown to be the strong vesicant in cashew. Cashew nuts is the main source of phenolic lipids for the synthesis of formaldehyde-polymers used in the automobile industry.
Resorcinol lipids were shown to be present not only in many higher plants but also in bacteria, in fungi, in algae, and mosses. The occurrence of various derivatives (ring or chain modified) have also been described. The structures of more than 100 identified natural resorcinolic lipid homologues may be found in 11 families of higher plants and have been reviewed by Kozubek et al. (Chem Rev 1999, 99, 1). Two alkyl resorcinols with strong cytotoxic activities have been isolated from rhizomes of Ardisia gigantifolia (Liu H et al., Phytochemistry 2009, 70, 773). The alkyl chain has 15 or 17 carbon atoms.
They are most common in cereal grains, e.g., rye (Secale cereale), wheat (Triticum aestivum), barley (Hordeum vulgare), and millet (Pennisetum thyphoides) (Ross AB et al., J Agric Food Chem 2003, 51, 4111).
In the major cereals, alkylresorcinols have been reported to be present in high levels (> 500 mg/g) in wheat and rye and in lower amounts in barley and millet. They are found mainly in the outer layers (bran fraction) of cereal grains. The homologue composition also varies greatly across the species; barley has the highest proportion of C25:0 (about 40%), rye has the highest proportion of C19:0 (about 30%), and wheat has the highest proportion of C21:0 (about 50%). Alkenylresorcinols are also present in cereals. Their amounts vary between 0.5% for barley, 1% for wheat, and 15% for rye. Not only the amounts but also the compositions of the specific mixtures are different. Thus, the ratio of the homologues C17:0/C21:0 is about 0.1 in wheat and 1.0 in rye, indicating that this determination may be used as good markers of these cereal products (Chen Y et al., J Agric Food Chem 2004, 52, 8242).
After epidemiological studies have associated the consumption of whole grains products with the decreased risk of chronic diseases (heart diseases, diabetes, some cancers),  phenolic compounds found in the cereals bran fraction were proposed as a possible mechanism for that protection (Slavin JL et al., Am J Clin Nutr 1999, 70, 459).

The occurrence of alkylresorcinols in mosses and algae are poorly documented but mixtures of six 5-alkylresorcinol homologues were isolated from the microalga Apatococcus constipatus. The predominant compounds have a C19, C21, or a C23 alkyl chain (Zarnowski R et al., Phytochemistry 2000, 55, 975).
Alkylresorcinols were reported to have antiparasitic, anticancer, antifungal, antimicrobial, and antioxidant effects. Their various biological activities suggest their involvement in the regulation of cell metabolism. These activities have been comprehensively reviewed by Kozubek A et al. (Chem Rev 1999, 99,1; Cell Biol Mol Lett 2001, 6, 351). Several alkenyresorcinols have been isolated from a small herbaceous plant, Labisia pumila, used in traditional medicine in the Malay archipelago (Al-Mekhlafi NA et al., Phytochemistry 2012, 80, 42).

A specific alkylresorcinol, xenognosin, is involved in the relationships between host plants and parasite germination. These relationships have been determined mainly in studying the parasitism of cultivated plants by Striga asiatica (Fate GD t al., J Am Chem Soc 1996, 118, 11369). It seems that a methylation in C4 and C6 on the benzenic cycle is requisite for its activation. A review on the xenognosin signaling may be consulted (Keyes WJ et al., J Plant Growth Reg 2000, 19, 217).

Extensive information on these lipids may be found in the website of Dr A. Kozubek.

These phenolic lipids have an aromatic ring belonging to the hydroquinone group linked to a straight carbon chain.

Embelin is a well known species of hydroquinone lipid which has a lateral chain (R) of 11 carbon atoms. It was characterized in a Myrsinaceae, Embelia ribes, which has antifertility properties and used as anthelminthic agent in India. Several alkyl benzoquinones have been isolated from another Myrsinaceae, Ardisia virens, which is used as a folk medicine for anti-vomiting and anti-diarrhea in Asia (Chang HS et al., Phytochemistry 2009, 70, 2064).

Sorgoleone is an allelochemical produced by several Sorghum species which is a natural herbicide repressing the growth of other plants present in their surroundings (bioherbicide) (Dayan FE, Planta 2006, 224, 339). Several analogues with various substitutions and chain lengths are found in root exudates. The major species is 2-hydroxy-5-methoxy-3-(8,11,14-pentadecatriene)-1,4-benzoquinone.

Biosynthetic studies have shown that the unusual fatty acid 16:3D9,12,15 synthesized in Sorghum roots is added to a hydroquinone, the new product being further methylated (Pan Z et al. J Biol Chem 2007, 282, 4326). Sorgoleone as an inhibitor of mitochondrial respiration and photosynthesis is extensively studied for field applications. A pertinent review on sorgoleone may be consulted for further details (Dayan FE et al., Phytochemistry 2010, 71, 1032).