These glycolipids are found in bacteria, yeasts and fungi but also in several plants. A review of their functions and potential applications has been released by Kitamoto D et al. (J Biosci Bioeng 2002, 94, 187).

Some examples of these compounds are given below:

– Acylated glucose : these glycosides were found in plant glandular trichomes and several degrees of acylation were found for glucose.
The 2,3-diacyl glucose was found in Datura metel (King RR et al., Phytochemistry 1988, 27, 3761), 1,2,3- and 2,3,4-triacylglucose were described in various Solanaceae (Solanum, Lycopersicon, Nicotiana). A triacylglucose (1,2,3-trihexanoyl-a-glucose) is present in leaf trichomes of Datura metel. 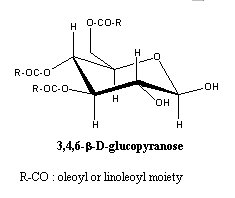 – Trehalose lipids (mainly diacyl trehaloses) : they contain a nonreducing disaccharide a-D-threalose, they are found in various Gram positive Eubacteria belonging to the mycolates group, the order Actinomycetales (Mycobacterium, Rhodococcus, Nocardia and Gordonia), in fungi, algae, and in insects where they may have a role as an energetic reserve compound (Asselineau C et al., Prog Chem Fats other Lipids 1978, 16, 59). They have surfactant properties. Trehalolipids have gained increased interest for their potential applications in a number of fields due to their ability to lower interfacial tension and increase pseudosolubility of hydrophobic compounds. The most widespread application is in bioremediation technologies as such compounds are known to enhance bioavailability of hydrocarbons (review in : Franzetti A et al., Eur J Lipid Sci Technol 2010, 112, 617). 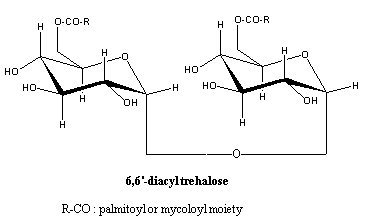 In Mycobacterium tuberculosis trehalose monomycolates and dimycolates are among the main glycolipid components of the cell membrane. Trehalose monomycolate is involved in the transfer of mycolic acid into the cell wall (Belisle JT et al., Science 1997, 276, 1420). These lipids occurred with more heavily acylated glycolipids whose main components were shown to be triacyl trehaloses and a penta-acyl trehalose.
In Mycobacterium fortuitum trehalose lipids with C16:0 and sometimes with C19:0 and C20:0 were described (Vilkas E et al., Bull Soc Chim Biol 1964, 46, 689). Similar but unsymmetrical compound (one glucose moiety esterified by two fatty acids) was also found in that species (Vilkas E et al., Chem Phys Lipids 1968, 2, 11).

– Lipooligosaccharides, a sub-group of “mycoside C”, are polyacylated trehalose lipids (see above) which contain 2 or 3 straight or methyl-branched chains distributed between the two glucose residues. Depending on the species, an oligosaccharide is linked either on carbon 3, 4 or 6 of the trehalose end, and this oligosaccharide has 2 to 6 sugar residues, some of which are specific carbohydrates. Pyruvic acid residues (carboxyethylidene) can be present, giving an anionic character to the molecule.
Immunochemichal experiments have shown that lipooligosaccharides are exposed at the mycobacterial surface, are immunogenic and phage receptors.

Esters of acyltrehaloses with sulfuric acid (acyltrehalose sulfate) were detected while searching for the origin of adsorption of cationic neutral-red on M. tuberculosis (Goren M, Biochim Biophys Acta 1970, 210, 127). The structure and activity of this class of glycolipids were extensively studied by Goren M (Bacteriol Rev 1972, 36, 33). Sulfate derivatives are few in natural substances, and the acyl chains are also not common, since they are mainly very long saturated and unsaturated (up to C64), highly branched in their carboxyl end. The sulfate moiety is on position 2 on one glucose residue of a trehalose residue bearing 3 or 4 acyl chains on various positions.
The principal sulfolipid in M. tuberculosis is a 2,3,6,6′-tetraacyl trehalose-2′-sulfate (Raynaud C et al., Microbiology 1998, 144, 577).

The sulfolipids, present uniquely in virulent strains of M. tuberculosis, have been reported to play highly significant roles in the interaction of the bacteria with its host (Daffe M et al., Eur J Biochem 1989, 185, 157).
The relations between fatty acyl structures and T cell response of Mycobacterium sulfoglycolipid have been described, they may help the design of analogs with potential use as tuberculosis subunit vaccines (Guiard J et al., J Immunol 2009, 182, 7030).

– A glycolipid formed of a glycoside (mannose and inositol) acylated by C15 (on the inositol) and C17 (on the mannose) was described in Propionibacterium (Prottey C et al., J Biol Chem 1968, 243, 6196).
Some of these derivatives are present in virulent strains of Mycobacteria, some others in Corynebacteria.
A similar core structure but acylated only on the inositol moiety has been described in a Caribbean sponge Discodermia dissoluta and named discoside (Barbieri L et al., J Nat Prod 2005, 68, 1527). The ester-linked acyl chains of these glycolipids have a normal or a branched chain (C18).

– Unusual acylated glycosides (monoacyl disaccharides) from a fungus species have been described which have inhibiting properties towards replication of influenza A virus in cultured cells and thus would have serious impact on public health (Boros C et al., J Nat Prod 2002, 65, 108). These glycolipids are formed of a disaccharide (glucosylgalactose or glucosylglucose) acylated by a monohydroxylated fatty acid itself esterified by oxalic acid (first report). They were named emmyguyacin A (1a) or B (1b), according to their structure.

– Inositol esters : Myo-inositol-derived glycolipids with anti-inflammatory activity have been isolated from the leaves of Solanum lanceolatum (Herrera-Salgado Y et al., J Nat Prod 2005, 68, 1031). They were named Lanceolitols and are formed of  a disaccharide moiety composed of a glucose or a xylose unit linked to an inositol  esterified by one of seven types of fatty acid. These fatty acids have a normal or branched saturated chain with 12 up to 20 carbon atoms. One homologue of these glycolipids is shown below.

Extensive studies have shown that the glandular trichomes of several members of the Solanaceae family of plants (tobacco, potato, tomato, and pimento) contain complexes of either glucose or sucrose esters (sometimes both). These leaf surface lipids have biological activity against plants and microorganisms (Matsuzaki T et al., Agric Biol Chem 1988, 52, 1889). Compounds of this type have been synthesized in a search for a new class of bioinsecticides. Many combinations of short to medium fatty acids (2 to 5) and a diversity of glucose and sucrose substitution patterns are involved.

Sucrose esters are recognized as precursors of important oriental tobacco smoke flavor components and have been positively correlated with tobacco quality.
Sucrose esterified with isovaleric acid found in the stem of Vernonia guinensis (Asteraceae) presents probably the first report of sucrose esters in this plant family and opens the question how wide these interesting compounds are distributed in the plant kingdom (Wang N et al., Phytochemistry 2003, 62, 741). 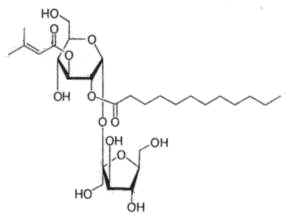 The sucrose moiety is linked to dodecanoyl and 2-methyl-2-butenoyl side chains. That compound was shown to be responsible for the antibacterial activity of the lipid extract.

Sucrose esters are produced in large amounts in commercial manufacturing equipments (batch or continuous reactors) as surfactants for food industry. These compounds are widely used in Japan, largely because sorbitan esters are not permitted for food use in that country. Emulsifiers consist mainly of mono-, di- and triesters of sucrose (saccharose). According to their composition, they have many different functions. They are used as emulsifying and dispersing agents for cream and bactericidal agents for canned coffee. These substances contributed to the development of Olestra, as non-digestible fat substitute (hexa-, hepta- or octa-ester of sucrose and palmitic or myristic acid). In contrast with sucrose esters used as emulsifiers, Olestra is not digestible because it is too bulky. The enzymes which break down natural fats (triglycerides) can’t get hold of it.

– Sorbitan esters : they are produced by esterification of sorbitol and fatty acids and are used as food surfactants. They form a mixture of sorbitol esters and sorbide esters, which are simultaneously produced as well as sorbitan esters.

There are many types of sorbitan esters with different kinds of fatty acids (lauric, palmitic, stearic, or oleic acid) and various degrees of esterification. Those are generally used as emulsifiers for cosmetics, agrochemicals, pigments, and metal working applications. They are also extensively used in the textile industry, as fiber lubricants and softeners.

A strain of Candida antarctica cultivated on vegetable oil was shown to produce in exudate  biosurfactants containing a high proportion of lipids. The same strain was shown to convert n-alkanes ranging from C12 to C18 into glycolipid biosurfactants. These lipids were determined to be 4-O-(mono or di-O-acetyl-diO-alkanoyl-D-mannopyranosyl)-erythritol (Kitamoto D et al., Agric Biol Chem 1990, 54, 31). Acyl residues were C8, C10, C12, and C14 fatty acids.

Incompletely determined lipids with similar glycosyl group were previously reported to be produced by Ustilago sp in the extracellular fluid (Haskins RH et al., J Microbiol 1955, 1, 749). They are promising biosurfactants because they show not only excellent surface-active properties but remarkable cell differentiation and growth inhibition activities against different human leukemia cell lines and mouse melanoma  cells. Mannosylerythritol lipids were shown to be able to induce neuronal differentiation in cancer cells (Wakamatsu Y et al., Eur J Biochem 2001, 268, 374). They were also shown to act as anti-agglomeration agent in an ice-water slurry system to be used for cold thermal storage. One mannosylerythritol lipid has been found to increase 50 to 70 times the efficiency of gene transfection mediated by liposomes with a cationic cholesterol derivative (Ueno Y et al., Biol Pharm Bull. 2007, 30, 169).

– Other types of glycosides with ester links

A monoglucosyl of t-octadec-3-enoic acid has been described in the fungus Aspergillus niger (Laine RA et al., Biochemistry 1972, 11, 2267).

Some strange glycolipids have been reported in the marine tunicate Aplidium multiplicatum (Kobayashi J et al., J Org Chem 1994, 59, 255). That compound, named shimofuridin A, is formed by a hydroxylated fatty acid, esterified to another fatty acid and to an original fuco-nucleobase moiety. Due to their possible pharmacological properties, several attempts were made to synthesize parent molecules. 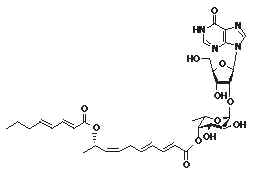 A C40-Carotenoid acyl glycoside was described as the principal carotenoid in Salinibacter ruber, an extremely halophilic eubacterium. This carotenoid glycolipid, salinixanthin, is formed by a sugar ester-linked to a fatty acid and O-linked to a carotenoid. Other forms were also studied in Chlamydomonas nivalis.