Inositol-containing lipids have been reported as early as 1930 in Tuberculosis bacilli (Anderson RJ, J Am Chem Soc 1930, 52, 1607) and later in soybean lipids (Klenk E et al., Z Physiol Chem 1939, 258, 33). Folch(J Biol Chem 1942, 146, 35) reported fort the first time the existence of an inositol containing phospholipid in an animal tissue, the brain. This compound in a very crude form was isolated from the “cephalin” fraction of brain phospholipids thanks to its lower solubility in ethanol than phosphatidylethanolamine and phosphatidylserine. Its structure was elucidated later (Pizer et al., J Am Chem Soc 1959, 81, 915). Soon after, the occurrence of higher phosphorylated parent compounds was reported. Now, three major inositol-containing phospholipids are known in mammalian cells. 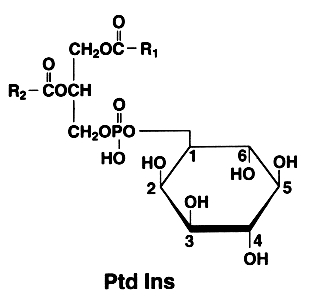 The later is also found with an additional phosphate esterified to the 4 position of the inositol. This compound is known as phosphatidylinositol 4-phosphate or PtdIns(4)P (formerly diphosphoinositide) 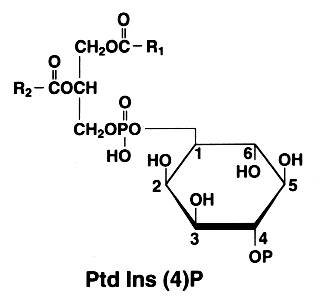 P on the inositol ring is for -PO3H2

PtdIns(4)P can be also esterified at the position 5 of the inositol by an additional phosphate group. This compound is known as phosphatidylinositol 4,5-bisphosphate or PtdIns(4,5)P2 (formerly triphosphoinositide). 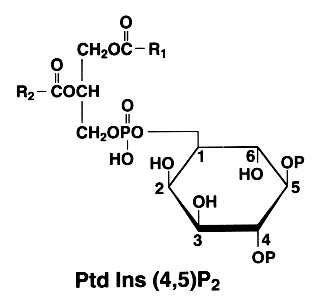 This phospholipid is of major importance since, after phospholipase C hydrolysis, a water soluble molecule (inositol 1,4,5-P) is formed which plays a fundamental role in cell signaling. The other part of the molecule, the diacylglycerol, is also involved directly in the activation of protein kinase C and indirectly in the eicosanoid cascade by the liberation of arachidonic acid (major fatty acid present at position 2 in all phosphatidylinositols and liberated by phospholipase A2 action).
Phosphatidylinositol 4,5-bisphosphate may be also considered a signaling molecule in its own right since the demonstration of its involvement in the regulation of sodium/calcium exchangers and potassium channels (Hilgemann DW, J Physiol 2007, 582, 903).

Because of their acidic nature, all the inositol phospholipids occur as salt associations with Na, K and Ca and need acidic conditions during their extraction to prevent trapping in the protein matrix.
Recently, identification of other inositol phospholipids was reported. These derivatives have a different phosphorylation pattern since they are defined as PtdIns(3)P, PtdIns(3,4)P2 and PtdIns(3,4,5)P3. While present at very low concentrations, they appear to have important functions in cell biology.

Lysophosphatidylinositol is a bioactive lipid generated by phospholipase A2 which is believed to play an important role in several diseases. It has been demonstrated that this lysophospholipid can affect various functions such as cell growth, differentiation and motility, in a number of cell-types, including cancer cells, endothelial cells and nervous cells (Pineiro R et al., Biochim Biophys Acta 2012, 1821, 694).

A graphical chart of the biosynthesis of inositol phospholipids may be found in a detailed article (Henry SA et al., Chem Phys Lipids 2014, 180, 23).