Fatty acid amides are natural products formed by connecting straight-chain, mostly unsaturated, aliphatic acids with various amines by an amide linkage. More than 300 derivatives are known from eight plant families consisting of various combinations of 200 acids with 23 amines.
These compounds are found in nature, but are seldom encountered in fats and oils. As many other nitrogen derivatives of fatty acids (amino acids, hydrazides, acid azides, nitriles, isocyanates, amines), they are of considerable interest and economic importance and have, therefore, been the object of much research and industrial attention mainly in the 50s. They are now produced on a large scale, their chemical features resulting in high surface activities. These compounds are useful as fiber lubricants, detergents, flotation agents, textile softeners, antistatic agents, wax additives, and plasticizers but some of them have also specific biological functions.
Alkamid® is an Internet resource of plant occurring N-alkylamides (http://alkamid.ugent.be/) managed by the Ghent University. Various data of specific molecules can be searched for their origin and their physicochemical properties.

They have a wide variety of biological activities ranging from the characteristic pungent/tingling property and high insecticidal toxicity to significant antifungal, antibacterial, antiprotozoal, molluscicidal, cercaricidal, and acaricidal activity. They also act as plant growth-promoting substances. Some of them possess anti-inflammatory and
analgesic properties and are responsible for immunomodulatory and cannabinomimetic effects (review in: Greger H, Phytochem Rev 2016, 15, 729).

The simple amides may be considered to be products resulting from replacement of the hydroxyl of the carboxyl group  with an amino group, RCONH2. The first preparation of  stearamide was made in 1882 (Hofmann AW, Ber. 1882, 15, 977) using the procedure of thermal dehydration of ammonium salts discovered by the famous French chemist Dumas (Dumas J, Ann chim phys 1830, 44, 29).

Fatty acid alkanolamides are industrially produced from fatty acids (largely from coconut oil) and alkanolamines, such as ethanolamine, by heating at about 150°C for 6-12 h (Feairheller SH et al., JAOCS 1994, 71, 863).

They can also be produced from plant erucic acid treated with ammonia.
These compound have a broad spectrum of uses, e.g., in shampoos, detergents, cosmetics, lubricants, foam control agents, and water repellents (Sanders HL, JAOCS 1958, 35, 548), and for the production of nonsticking plastic films and protective coatings.

Simple amides of fatty acids (alkylamides) were shown to be very potent bio-effectors. For example, in chicken chorioallantoid membrane and rat cornea, it was shown that amide of 13-cis-docosenoic acid (erucamide) discovered in the bovine mesentery is an angiogenic factor (Wakamatsu K et al., Biochem. Biophys. Res. Commun., 1990, 168,423). Angiogenic activity (induction of capillary development) was demonstrated by synthetic primary amides of 13-t-docosenoic acid, 18:0, 20:0, 22:0, 20:4n-6, and to a lesser extent of 16:0, 18:1n-9.
The amide of 9-octadecenoic acid (oleamide) was isolated from the cerebrospinal fluid of sleep-deprived cats.

This compound is recognized now to be the endogenous factor inducing sleep in mammals (Cravatt, B F et al., Science, 1995, 268, 1506). Rats treated  with oleamide  fall asleep. It seems that oleamide may have many other physiological functions, including thermoregulation and sensitivity to pain.
Oleamide is synthesized by the brain cells from oleic acid and ammonium (Sugiura, T et al., Biochem. Mol. Biol. Int., 1996, 40, 93) and its level is regulated by a fatty amide hydrolase which degrades the amide to oleic acid. Apart from its effect on the central nervous system, oleamide modulates the function of the immune cells.
Oleamide which is present in breast milk has been reported to affect learning and memory-related abilities in animal experiments. Thus, oleamide supplementation during suckling in mice was shown to promote learning and memory-related abilities by augmenting hippocampal neuronal proliferation and boosting synaptic plasticity (Tao R et al., J Nutr 2022, 152, 889).
Unexpectedly, oleamide is an important pheromone attractant of the hermaphroditic shrimp Lysmata boggessi.(Zhang D, et al., PLoS One, 2011, 6, e1772064). It is located on the cuticle and its bioactivity is enhanced when incorporated as a pheromone blend with hexadecanamide and methyl linoleate.
Primary amides were identified in the cuticle of Phyllostachys aurea leaves, with a characteristic chain length profile
peaking at C30. The amides were present exclusively in the epicuticular layer and thus at or near the surface, where they may affect plant-herbivore or plant-pathogen interactions (Racovita RC et al., Phytochemistry 2016, 130, 252).

Cerulenin is an antifungal antibiotic discovered in the culture filtrate of Cephalosporium caerulens(Matsumae A et al., J Antibiot (Tokyo) 1963, 16, 236) and shown to inhibit fatty acid biosynthesis (Vance D et al., Biochem Biophys Res Commun 1972, 48, 649). This epoxy-fatty amide has 12 carbon atoms, two double bonds and an epoxy ring. The inhibition of the fatty acid synthase by cerulenin leads to cytotoxicity and apoptosis in human cancer cell lines, effect which suggested a possible cancer treatment. It blocks the synthesis of polyketides in a wide variety of organisms and has a wide range of antimicrobial activity inhibiting the growth of yeast-like fungi, such as Candida, Saccharomyces and Cryptococcus.

Many bioactive lipids containing a fatty acid linked to an amine-containing compound are found in  animal organisms and are described in the simple lipid section. Much attention has been given to that  class of compounds. Briefly, the origins of this research can be traced to 1957 when Kehul FF et al.J Am Chem Soc 1957, 79, 5577) identified N-palmitoylethanolamine as an anti-inflammatory factor present in egg yolk, soybeans, and peanuts. Renewed interest in this and similar N-acylethanolamines arose with the discovery of N-arachidonoylethanolamine (anandamide). An overview of the biochemistry and pharmacology of anandamide has been released (Hansen HS et al., Eur J Lipid Sci Technol 2006, 108, 877).

Thus, simple lipoamino acids with an amide link between one fatty acid and one aminoacid (serine, ornithine, thyrosine, glycine, proline or leucine) or domamine or aminoalcohol (anandamide) are described.

A review on the role played by these molecules in pain modulation has been released by Walker JM et al. (Prost Lipid Med 2005, 77, 35).

Several alkylamides have been isolated from Echinacea sp (Asteraceae), one of the most popular medicinal plant used for treatment and prevention of common cold and respiratory tract infections (Woelkart K et al., Planta Med 2007, 73, 615). These alkylamides differ in chain length and unsaturation, many having a diynoic structure. They show structural similarity with anandamide and pharmacological studies have shown that they bind significantly to cannabinoid (CB2) receptors.

A method for the isolation of C18 fatty acid amides from lipid extracts and their analysis by mass spectrometry was reported (Sultana T et al., J Chromatogr A 2006, 1101, 278). The simultaneous quantification of anandamide and other endocannabinoids in brain tissue has been reported (Chen J et al., Chromatographia 2009, 69, 1).

In 2018 the group of Makarieva has reported an isolation of new marine lipids–namely,  melonosins A and B from the marine sponge Melonanchora kobjakovae (Guzii AG et al., J Nat Prod 2018, 81, 2763). These molecules have been characterized as unusual lipids containing ω-hydroxy fatty acid amides. The authors have reported they were capable of inhibition of oncogenic nuclear transcriptional factors AP-1 or NF-kB in JB6 Cl41 cells at noncytotoxic concentrations. Hence, inhibitors of these nuclear factors may be considered potential cancer-preventive agents.

Similar structures, 11-Cyano or 11-thiocyanato undecanoic acid phenylamide, have been synthesized as corrosion inhibitors to prevent the corrosion of metals in acidic media (Yildirim A et al., Eur J Lipid Sci Technol 2008, 110, 570). These molecules generate a protective layer by adsorption to the metal surface via electrons present on their heteroatoms (0, S, N).

More complex fatty acid amides (one of them is shown below) were discovered in leaves of Chrysanthemum morifolium (Compositae). These isobutylamides, having one or two acetylenic bonds and three or four double bonds, were associated with host-plant resistance against a major insect pest facing greenhouse industry (Frankliniella occidentalis) (Tsao R et al., J Nat Prod 2003, 66, 1229).

The N-alkylamides dodeca-2,4-dienoic acid (1) and dodeca-2,4,8,10-tetraenoic (2) acid isobutylamides from the plant purple coneflower Echinacea were shown to be likely responsible for the early treatment for colds and as immunostimulants (Gertsch J et al., FEBS Lett 2004, 577, 563). 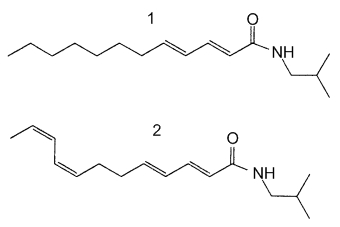 These alkylamides represent a new class of cannabinomimetics which are able to modulate tumor necrosis factor a mRNA expression in human monocytes/macrophages via the cannabinoid type 2 receptor and have immunomodulatory activities (Raduner S et al., J Biol Chem 2006, 281, 14192).

The isobutylamide of deca-trans-2,trans-4-dienoic acid, isolated from the roots of Piper nigrumand various Asteracaea, is a modulator of the sensory neuron function. It is an efficient model compound for sensory studies but also for diabetes, cancer, infection and inflammatory research. The isobytylamide of deca-trans-2,cis-6,trans-8-trienoic acid (Spilanthol), isolated from several species of Spilanthes, is likely responsible for the anesthetic properties of these plants.

Natural alkylamides, called sanshools, are found in the pericarp of the fruit of Szechuan pepper (Menozzi-Smarrito C et al., J Agric Food Chem 2009, 57, 1982). Four sanshools were described in that fruit, they differ from the configuration of one double bond and the length of the polyenic chain (12 or 14 carbons). Two are shown below.

One common characteristic of all these compounds is their agonistic activity on TRPV1, consistent with their burning properties (Sugai E et al., Biosci Biotechnol Biochem 2005, 69, 1951).

A comprehensive review on fatty acid amides may be found on the site of Biochimica (Moscow). Their pharmacological properties were discussed by di Marco V (Biochim Biophys Acta 1998, 1392, 153).

Fatty hydroxamic acids may be regarded as derivatives of both fatty acids and hydroxylamine. Their general formula is  R-CO-NHOH.

Azamacrolides are alkaloids found in defensive droplets from glandular hairs of the pupa of the Mexican bean beetle, Epilachna varivestis (Attygalle AB et al., PNAS 1993, 90, 5204). Chemical studies have shown that the major constituent of this secretion, epilachnene, is the 11-propyl-12-azacyclotetradec-5-en-14-olide. this compound is a vary efficient repellant for ants. Its biosynthesis has been described to be the result of a condensation of oleic acid and serine (Attygalle AB et al., PNAS 1994, 91, 12790).