In his classic studies on fatty acids from pork fat, Chevreul (1823) recognized the nature of oleic acid but it was not prepared in pure condition for  a long time. Its structure was not definitively elucidated by a series of complex chemical reactions until later (Baruch J, Ber 1894, 27, 172). Much simpler proof of the now accepted structure of oleic acid was given by means of oxidation techniques (Edmed FG, J Chem Soc 1898, 73, 627). The  ozonisation method for the determination of the position of the unsaturated linkage was used for the first time in lipidology in 1903 (Molinari E, Annuario della Soc Chimica di Milano 1903, 9, 507). Oleic acid synthesis was realized in 1934 (Noller CR et al., J Am Chem Soc 1934, 56, 1563).

Mono-unsaturated normal fatty acids are widespread in the living world where they occur mostly as the cis-isomer.  Over a hundred naturally occurring monoene fatty acids have been identified. They have the general structure:

The most frequently they have an even number of carbon atoms and the unique double bond may be in a number of different positions.
The double bond can exist in two stereoisomeric forms :

The commonest cis-monoenes are of the n-9 series, as oleic acid from olive oil (cis-9-octadecenoic acid) and from quite all seed oils.

Some important monoenoic acids are found below: 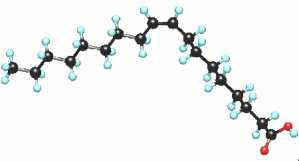 N-7 monoenes : The 5-dodecenoic acid (denticetic acid, 12:1 n-7) is present in sperm whale oil. This compound was formerly known to be present in milk lipids.
The rare 21:4 n-7 has been described in some animal species (crab, sponge, protist), but it was found in high amount (about 9 % of the total fatty acids) in a opisthobranch mollusc, Scaphander lignarius (Vasskog T et al., Mar Drugs 2012, 10, 2676). That fatty acid was shown to be cytotoxic against human cancer cell lines normal lung fibroblasts, more than EPA and arachidonic acid.

N-10 monoenes : Sapienic acid (16:1 n-10), a 16-carbon fatty acid with a single cis double bond at the sixth carbon from the carboxyl end, is the most abundant fatty acid in human wax sebum, and among hair-bearing animals is restricted to humans (Nicolaides N, Science 1974, 186, 19). Sapienic acid has been also identified in in human hair and nail samples beside 18:1n-10 (Destaillats F et al., J Chromatogr A 2011, 1218, 9384). Thus this fatty acid is truly unique to sebum, hair and nail and is not found anywhere else in the human body.
Notably, this fatty acid has been implicated in the pathogenesis of acne (Downing DT et al., J Am Acad Dermatol 1986, 14, 221) but was shown to be effective against gram-positive bacteria in human skin sebum (Wille JJ et al.., Skin Pharmacol Physiol 2003, 16, 176). Further works characterized its biosynthesis by a Δ-6 desaturase acting on palmitic acid  (Ge L et al., J Invest Dermatol 2003, 120, 707). Sapienic acid has been detected in deep-sea Foraminifera (Kharlamenko VI et al., Lipids 2017, 52, 345).

N-15 fatty acids : An unusual 20 carbon fatty acid (20:1 n-15) is found in high concentration (about 60%) in seeds of Limnanthes alba (meadowfoam), an herbaceous winter annual plant native to the pacific Northwest area of the United States.

No fatty acid exists naturally with the double bond close to the terminal methyl group, only one is chemically synthesized from ricinoleic acid, the undecylenic acid (11:1 n-10).

One geometrical and several positional isomers of oleic acid exist with a trans double bond. Among the naturally occurring  trans isomers, the double bond is in the (n-13), (n-12), (n-9) or (n-7) position.
Vegetable oils and fats are almost trans free, if not warmed at high temperature in the presence of active components. In contrast, trans fatty acids occur in most animal fats especially in butter and ruminant fats.

The elaidinization reaction was first obtained by a French pharmacist and chemist, Jean-Joseph-Étienne Poutet (1779-1858) (Ann Chim Phys 1819, 12, 58), who observed that trioleine could be converted to the consistency of pork lard when treated with the oxides of nitrogen derived from mercurous nitrate (mainly nitrous acid). 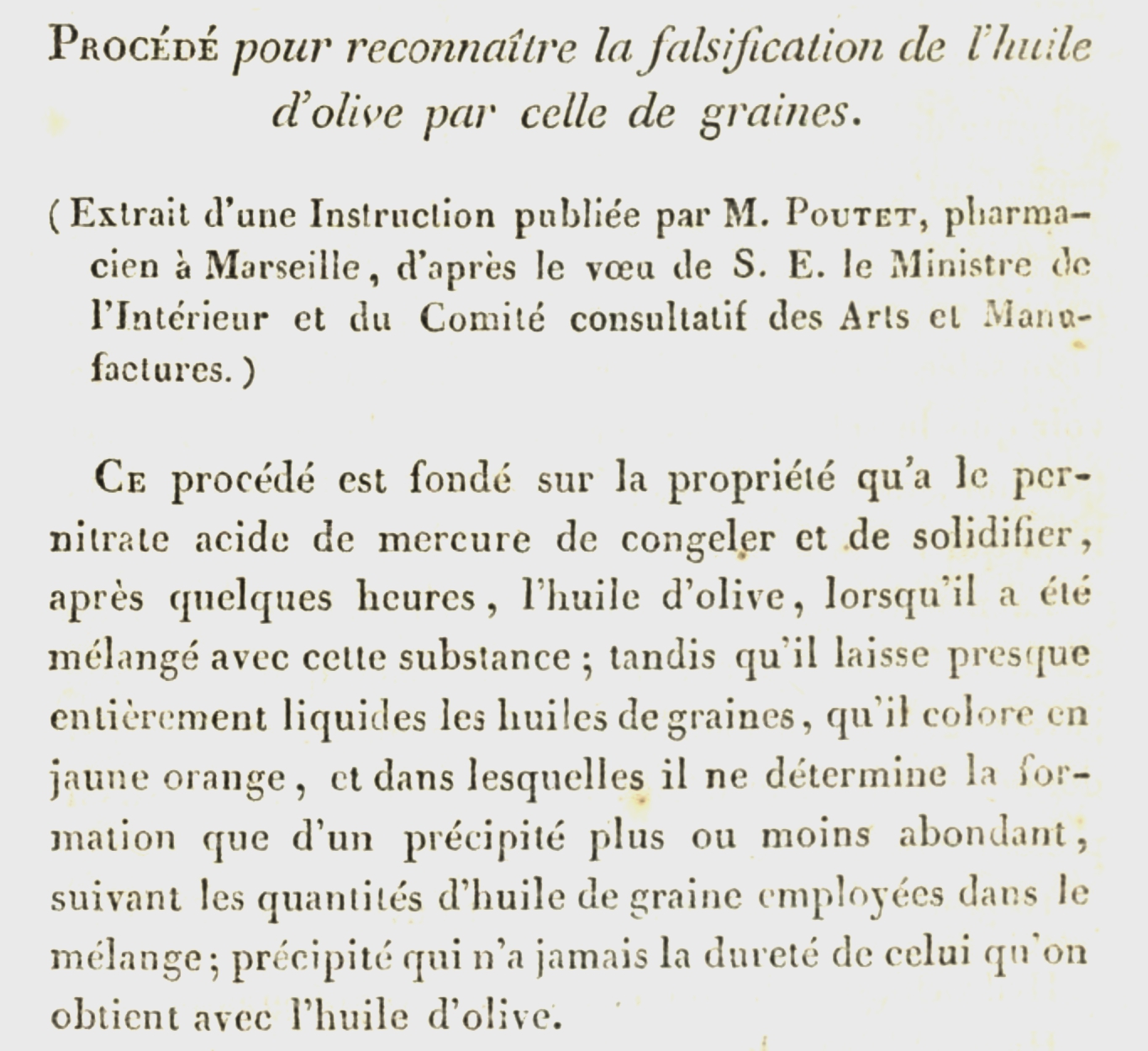 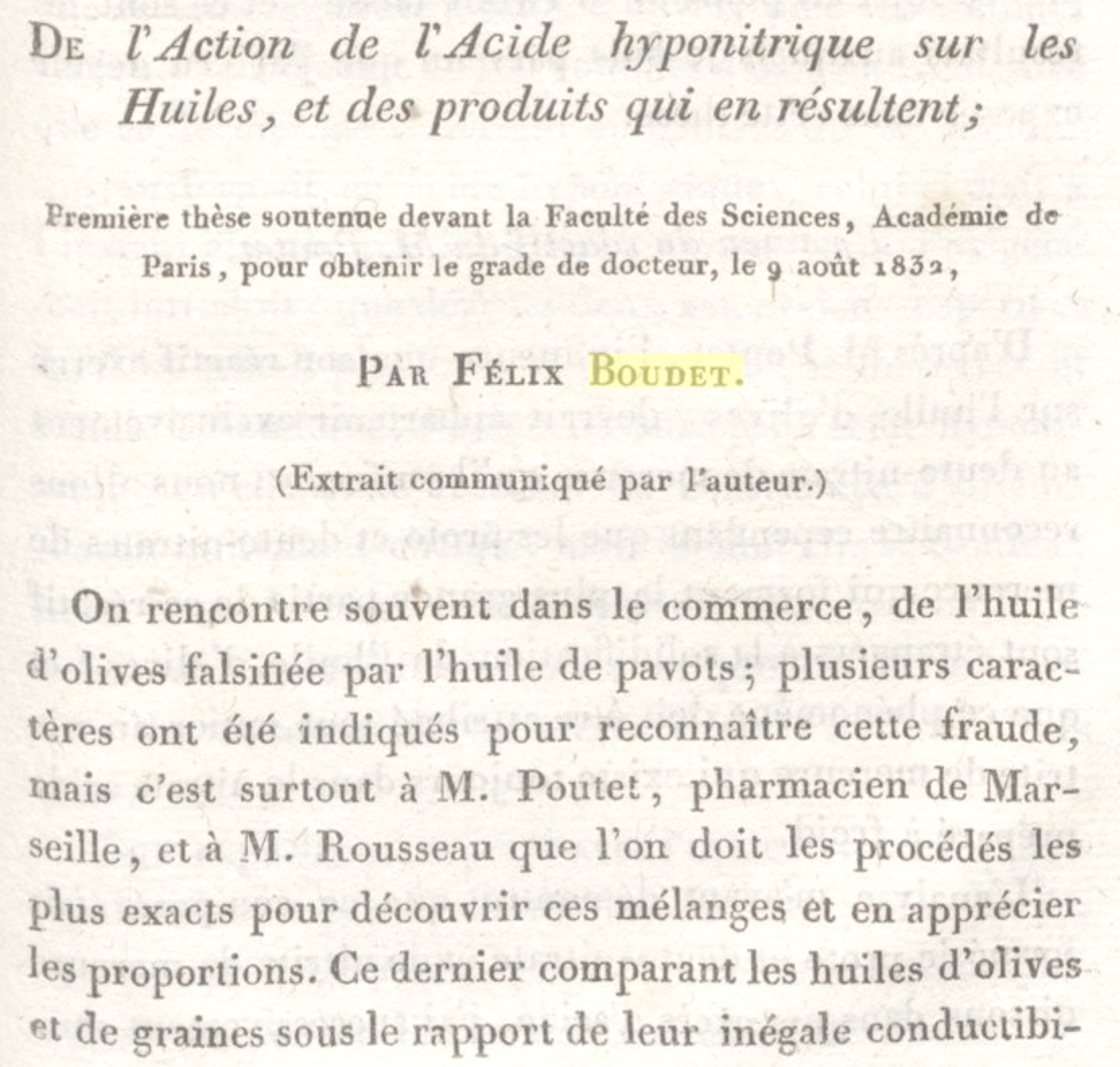 Until 1952, elaidic acid was known only as a laboratory isomerization product of oleic acid. This trans fatty acid was demonstrated by infrared analysis to be present in substantial quantities in beef fat (Swern D et al., JAOCS 1952, 29, 44). Later, it was shown that trans fatty acids arise in the first stomach of ruminants as products of catalytic hydrogenation of dietary unsaturated fatty acids (conjugated by an isomerase) during bacterial fermentation. As a result, butter, cheese, milk, beef and mutton fats contain approximately 2-8% transfatty acids by weight.
Trans-fatty acids are also formed in varying amounts during the industrial hydrogenation of plant or fish oils. This hydrogenation improves the thermal stability and prevents any oxidative process in very unsaturated oils. The natural kick found in cis-fatty acids disappears and the molecule becomes linear and thus has physical properties similar to saturated fatty acids as it was observed by Poutet in 1819.

Trans-fatty acids are also formed under the action of thiyl radicals.

An unusual trans fatty acid, t3-hexadecenoic acid (trans-16:1 n-13), occurs in eukaryotic photosynthetic membranes (mainly in phosphatidylglycerol) from higher plants and green algae. As this fatty acid is absent from etiolated tissue, it has been inferred that it has a specific role associated with the light reactions of photosynthesis (Gounaris K et al., Biochem J 1986, 237, 313).

Vaccenic acid has been shown to attenuate complications observed in the metabolic syndrome, including dyslipidemia, fatty liver disease, and low-grade inflammation. An explanation of that property could be that vaccenic acid lowers intestinal inflammation by increasing the production of anandamide and related N-acylethanolamines (Jacome-Sosa M et al., J Lipid Res 2016, 57, 638).
A review of the diversity of adverse health effects of individual trans fatty acid isomers may be consulted (Gebauer SK et al., Lipids 2007, 42, 787). A review of the possible effects of trans fatty acids on heart health and the recommendations for the UK population has been reported (Denny AR, Nutr Bull 2008, 33, 124).