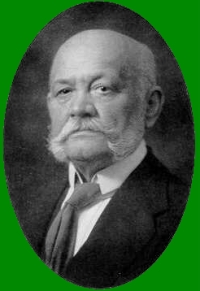 After chemistry studies in Leipzig (PhD in 1872), he became assistant at the institute of agriculture and animal chemistry in the same town. He was appointed assistant at the research station of agriculture chemistry in Vienna (1873) and became in 1879 professor of animal physiology and dairy at the agriculture high school in Munich (up to 1913). He earned a medicine doctor degree in 1894 from the university of Halle.
He was considered a very intelligent man and a scientist clever in several domains. He was an estimated teacher, a prolific scientist and an ingenious inventor.

He published numerous papers mainly in the journal “Münschener Medizinische Wochenschrift”.
After papers on the physiological chemistry of milk (1873) and on butter formation (1876), he published an important work (soxhlet) in the field of lipid technology (1879). He described a new to extract fats from milks which was later used around the world for the extraction of lipids in all biological materials and known as Soxhlet’s apparatus. This device improved largely the chemical study of lipids and is yet used in several laboratories.
Later, his studies on lipids led him also to describe a simple device to measure directly milk fat contents (1881). He studied also the chemical properties of margarine (1887).
In the field of milk chemistry, he contributed to the analysis of sugars (1880, 1892) and acidity (1897). His work on the sterilization of infant milk (1886) led him to describe a simple household device to sterilize (pasteurize) milk bottles (1891). Thus, with that invention, Soxhlet is yet considered in Germany as the “reformator of infant feeding”.
In 1893, he described the chemical differences between human and cow milk.

Soxhlet is also known as the first scientist who fractionated the milk proteins in casein, albumin, globulin and lactoprotein. Furthermore, he described for the first time the sugar present in milk, lactose.

In 1900, he investigated the relationships between the milk content in calcium salts and the rachitis frequency.
One of his last work (1912) was the connection between the iron content of human and cow milks and infant anemia.