Solid-phase extraction on micro-columns filled with various phases is at present the most rapid and reliable technique to obtain a lipid fraction enriched with glycosphingolipids from a complex lipid mixture. This technique is well adapted to small lipid amounts (from some micrograms to 10-20 mg) but may be scaled up using large columns. Moreover, low solvent volumes are needed and automated device may be used.

It must be emphasized that better and clearer results are expected if lipid extracts are previously saponified (mild alkaline methanolysis) to remove the interfering glycerolipids (triglycerides, phospholipids, glycoglycerolipids). Thus, the free fatty acids and the water-soluble moieties generated by glycerolipids are easily separated from the remaining glycosphingolipids.

– First procedure: The easiest way to isolate all glycosphingolipids is to use silica column and acetone elution as described previously. The eluted fraction contains neutral and charged glycolipids without overlapping with ceramides, fatty acids or sphingomyelin. This fraction may be further analyzed by TLC or HPLC.

– Second procedure: A sequential separation of glycosphingolipids may be effected using aminopropyl column and differential elutions of neutral and acidic lipids. The selected procedure allows the isolation of sphingomyelin and ceramides free of fatty acids. Free spingoid bases are recovered with neutral glycosphingolipids but are easily separated by TLC or HPLC.

– Third procedure: Another sequential separation of neutral (cerebrosides) and acidic (phosphorylated, sulfated or with hexuronic acid) glycolipids may be efficiently effected by ion exchange chromatography on DEAE cellulose or ion exchange resin. These procedures give the purest fractions when applied on saponified extracts. Furthermore, it may be easily scaled up.

An application note with details on the detection of sphingolipids with a light scattering device (Corona Charged aerosol detector) may be found on the manufacturer web site.

Among all lipids, this group remains probably the most difficult to analyze by HPLC because it contains a complex range of polar (sugar) and non polar (fatty acid and long chain base) components. Before any attempt to separate sphingolipids, removing the other lipid contaminants (glycoglycerolipids, phospholipids) is necessary.

Glycosphingolipids may be analyzed either native, thus preserving their original structure, or after chemical derivatization, method enabling higher detection sensitivity.

The first historical approach to the separation of glycosphingolipids by HPLC was to use the native forms of these lipids. An efficient procedure using a silica gel column and a gradient of isopropanol/hexane/water was described (Watanabe K et al. J Lipid Res 1981, 22, 1020). Glycolipids containing one up to five sugar residues were clearly separated but some separation was also achieved according to the nature of the ceramide moiety.

The HPLC studies of these molecules were poorly developed since all conventional detection system appeared unreliable analyzing intact molecules without absorbing structures. The development in light-scattering detection surely enables to develop further improvements in separating native glycosphingolipids.
A simple and accurate method for quantitative determination of the cerebroside pool (1-40 mg) in wheat flour and food samples was proposed using a silica column, a binary elution program mixing chloroform and methanol/water (95/5, v/v), and an evaporative light scattering detector (Kashima M et al., J Oleo Sci 2002, 51, 347). Cerebrosides were eluted after 12 min. Prior the analysis, food samples were saponified so as to remove glycerolipids, thus improving the precision of the determination, then the cerebrosides were precipitated in the cold from a solution of hexane/isopropanol (7/3, v/v) and re-dissolved in chloroform/methanol (9/1, v/v) before injection.

A simple method for the HPLC separation of neutral glycosphingolipids with osidic chain of one up to four sugar units was described (Roy S et al., J Chromatogr B 2004, 805, 331). Glucosylceramide, galactosylglucosylceramide, globotriaosylceramide, and globoside were finely separated using a polyvinyl alcohol bonded phase, a gradient elution from 100% chloroform to 100% acetone/methanol (90/10, v/v) and an evaporative light-scattering detection. The addition of triethanolamine and formic acid to the solvents enabled a limit of detection of about 80 ng for each injected compound.

The most simple and efficient derivatization procedure involved benzoyl chloride to form O- and/or N-benzoylated products which can be quantitatively measured with high sensitivity by their absorption of UV light (Review in: McCluer RH et al. Meth Enzymol 1989, 172, 538). Glycolipids containing non-hydroxy fatty acid are labelled on the amide hydrogen and the sphingoid base hydroxyl (per-O,N-benzoylation) and those containing a hydroxy fatty acid are labelled on the fatty acid hydroxyl and on the sphingoid base hydroxyl (per-O-benzoylation). Since this technique does not allow the HPLC separation of both types of glycosphingolipids, it is recommended to separate the components by TLC prior the HPLC analysis.

Lipid samples are evaporated in screw-capped vials and after addition of 0.5 ml of 10% benzoyl chloride in pyridine (v/v) the tubes are incubated at 37°C for 16 h.
The solvent is evaporated with a stream of nitrogen , then 3 ml of hexane is added and the tubes are vortexed. The hexane phase is washed  3 times with 1.8 ml of methanol/water (80/20, v/v) previously saturated with sodium carbonate (1.2 g in 300 ml of methanol/water). The lower layer is removed and hexane is then washed with 1.8 ml of methanol/water (v/v). The hexane layer is collected, evaporated and the lipid residue is dissolved in a small volume of hexane.
The derivatives are separated on a silica column with a linear gradient  of 2-25 % dioxane in hexane and a flow rate of 2 ml/min. They are detected at 230 nm.
Below is given the chromatogram of derivatized glycosphingolipids from human plasma. 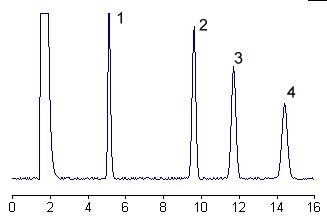 It is important that lipid samples are free of silica or silicic acid particles before derivatization. Thus, lipid solutions must be filtered before addition of benzoyl chloride. Benzoyl chloride is very moisture sensitive, use only freshly opened bottle stored in dry place. Similarly, fresh pyridine must be dried by storage over molecular sieves and kept in dry place. Dry thoroughly the lipid samples in vacuo before reagent addition.

The selectivity and efficiency of the separation system is such that the neutral glycosphingolipid derivatives yield only one peak  for each component, the fatty acid moieties being without influence on the separation.

Sulfatides are also benzoylated but are lost during the partition between the hexane and the methanol/water phase. The analysis of sulfatides involves the isolation of the glycosphingolipid fraction and the subsequent separation of  sulfatides from neutral lipids by chromatography on DEAE-sephadex or DEAE-cellulose column. The sulfatide fraction is derivatized and then desulfated by vortexing 2 h in 0.25 ml 0.2M HClO4 in acetonitrile and 0.5 ml hexane. The residue of the hexane extract is analyzed by HPLC. A complete and precise description of the analytical process may be found in Jungalwala FB et al. (Meth Enzymol 2000, 311, 94)

The minimum level of detection is approximately 50 pmol of each lipid, the derivatives being quantified by comparing the response with an external standard.