Column chromatography with silicic acid is by far the most widely adopted techniques when mg amounts of phospholipids must be prepared. Thus, column chromatography, with adaptation, can be used as a large-scale preparative procedure but of a low resolution. Phospholipids are held by silicic acid in a variety of ways (hydrogen and ionic bonding…) and released by eluting the column with solvents of increasing polarity.
Different brands of silicic acid are available and preliminary assays must be done as results vary, even from one batch to another. We use silica gel G 230-400 mesh from Merck as for the fractionation of lipid classes, but a larger size may be used.
To get optimal results, the degree of hydration of the silicic acid must be held constant, the size of the column must be chosen with a height-to-diameter ratio of about 20. The optimal load is practically of 30 mg of total lipids per g of dry silicic acid and the flow rate is between 1 and 3 ml according to the size of the column.
It is more practical to apply the lipid solution in a small volume of the least polar eluting solvent (acetone after elution of neutral lipids by chloroform) and, after draining, a step-wise elution is processed.

There are many solvent systems which have been described and the choice depends on the objective of the experiment. We give below a classic step-wise elution protocole but it may be adapted by the analyst for its own purpose.
The procedure given bellow is modified from Hanahan DJ (A guide to phospholipid chemistry, Oxford University Press, 1997).

Approximately 20 column volumes (considering only the silicic acid bed) are used for each elution step.
Phospholipid components are not completely pure, a further fractionation by column chromatography or TLC may be necessary. The purity of each fraction may be rapidly verified by TLC on microplates (HPTLC) as we have previously described.

All that applies to intact phospholipids and enables to determine their  relative amount and possibly their composition after post-detector collection.
Sometimes, the direct HPLC separation is not enough efficient and a previous deacylation is needed. Thus, for the fine analysis of polyphosphoinositides, the total phospholipids or fractions purified by TLC are deacylated and the water soluble products (glycerophosphoinositol phosphates) are separated by HPLC with an anion exchange column.

Two types of separation are selected:

Separation based on a silica column

The proposed method used a ternary gradient and was used to separate all lipid classes but can be easily adapted for the separation of only phospholipid classes (Lutzke BS et al., L Lipid Res 1990, 31, 2127).

The authors demonstrated that they could easily separate lipid classes from rat tissues in 30 min and detect 1 µg or less of any of the separated lipids. Cerebrosides and sulfatides co-migrated (elution time: about 12 min). However, sphingomyelin was not completely separated from phosphatidylcholine at the end of the run. The procedure was reproducible and allows the detection of low levels of phospholipids (200 ng) in a sample of no more than 80 µg of total heart lipids.

The proposed method is based on a binary gradient of chloroform and methanol solutions and can be considered as one of the most efficient methods (Becart J et al., J High Resolution Chromatogr 1990, 13, 126). A diol column may be used instead of the proposed silica gel column. 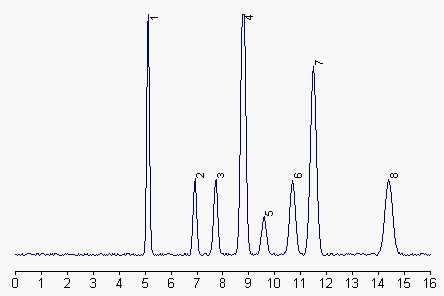 To prevent the dissolution of the silica packing by low pH buffer, it was proposed to use an linear elution program with chloroform/methanol/triethylamine buffer (87.5/12/0.5, v/v), titrated at pH 3 with 1M formic acid at t=0 min to 28/60/12 at 16 min. Efficient separations with phosphatidic acid eluting before phosphatidylethanolamine were obtained and no loss of column performance was observed after 1500 runs (Rombaut R et al., J Dairy Sci 2005, 88, 482).

Separation based on a diol column 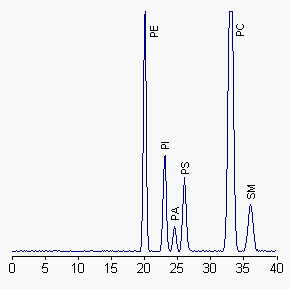 When plasmalogens are present, the corresponding peak is ahead of diacyl-PE. Complex glycolipids can also be separated with this HPLC method, cerebrosides being eluted at about 5 min and sulfatides 2 min before PE. To maintain peaks within the calibrated range of phospholipid standards, the authors injected no more than 250 µg phospholipids. Further analysis may be run on fractions with a higher column sample load (about 0.5 mg lipids).
A procedure using a diol column and a mass spectrometry detector has been used to estimate the phospholipids present in corn oil, various molecular species were also detected (Harrabi S et al., Food Chem 2009, 114, 712).

Separation based on a cyanopropyl column

A method for the separation and identification of lipid classes by normal-phase HPLC on a cyanopropyl column has been described (Olsson P et al., Lipids 2012, 47, 93). The use of a simple binary gradient, with toluene as a component, provided a rapid separation (22 min) of non-polar as well as phospholipid classes. The cyanopropyl phase has also the potential to be used in advanced separations of acylglycerol classes (MAG, DAG, TAG). 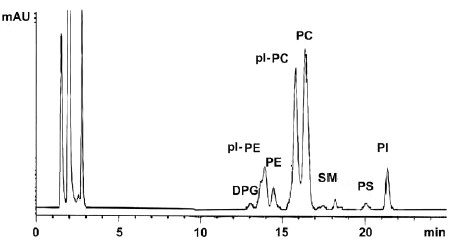 As phosphatidic acid and its lyso compounds are involved in the regulation of various cellular processes, there is a necessity to quantify accurately these bioactive lipids in cellular extracts. Below is described a method which allows their accurate quantification using a chloroform/methanol (1/2, v/v) extraction, a diol HPLC column ( Supelcosil LC-318 diol column (25 cm long, 4.6 ID, 5 mm particle size), a ternary basic gradient (Stith BJ et al., J Lipid Res 2000, 41, 1448) and a light scattering detector.

The use of radio labelled molecules allowed the authors to estimate a total recovery rate of 48% for phosphatidic acid and 53% for its lyso compound. A polynomial third-order cubic regression equation was used to quantify the phospholipids.

A simple HPLC method was described for the simultaneous analysis of phosphatidylcholine and its lyso derivatives (Adlercreutz D et al., JAOCS 2001, 78, 1007). This method was proposed to be suitable for studying reactions on the phospholipid and acyl migration of its lyso derivatives.
A simple HPLC method has been reported for the separation of cardiolipin by HPLC (Barcelo-Coblijn G et al. JAOCS 2008, 43, 971).

The study of the various phosphoinositide isomers is done after removing the fatty acyl groups and separating the deacylated forms by HPLC with a salt gradient. Since the water-soluble derivatives have no absorption characteristics, the methodology involves the determination of radioactive products. Thus, an on-line continuous flow liquid scintillation detector is required. Nonradioactive forms may be determined using a conductivity detector (see below).

Deacylation of phospholipids: The lipids dried or adsorbed to silica gel are treated in a screw-capped glass tube with 1.8 ml of deacylating reagent (40% methylamine/water/methanol/butanol, 5.4/3.2/9.1/2.3, v/v) at 53°C for 50 min (water bath).  The mixture (or the supernatant if the silica gel is present) is then evaporated under a nitrogen flow in a well ventilated hood.
Water (2 ml) is added to the dried residue, the solution is deeply frozen and then freeze-dried. The dried samples are resuspended in 2 ml of water, and extracted with an equal volume of butanol/petroleum ether/ethyl formate (20/4/1, v/v). The aqueous phase is again freeze-dried and stored at -70°C until analysis by HPLC.

HPLC analysis of deacylated phospholipids:
Column: Partisphere SAX from Whatman (5mm, 250 x 4 mm).
Elution: a discontinuous gradient obtained from mixing solution A (water) and solution B (1M (NH4)2HPO4 titrated at pH 8 with conc. phosphoric acid) according to the table below:

Non-radioactive nucleotides (AMP, ADP and ATP) are added to the aqueous sample (total volume: 0.1 up to 1 ml) prior filtration and injection to allow monitoring with a UV detector to evaluate the reproducibility of elution times. We add 20 ml of a mixture containing 200 mM of each nucleotide to 1 ml sample.

– Preparation of purified phosphatidylcholine by HPLC.
Yoon TH et al., J Chromatogr A 2002, 949, 209-216
A simple HPLC procedure which enables the preparation from egg yolk of about 5 mg PC with 99% purity per unit gram stationary phase.

Light-scattering detection of phospholipids resolved by HPLC.
Descalzo AM et al., Lipids 2003, 38, 999-1003
Method adapted to lung surfactant using a gradient based on isopropanol/hexane/water combined with methanol and acetonitrile on a silica column.