Here is described a simple and reliable procedure to separate vitamin A and its fatty esters in biological extracts.
The method is based on a rapid extraction of neutral lipids followed by a HPLC process to separate the free vitamin A and its esters, the detection being made with a UV spectrophotometer.
Our methodology is adapted from Barbas C et al. (J Chromatogr A 1997, 778, 415).

To prevent the degradation of these labile compounds we have adopted the extraction procedure of Barton et al. (Lipids 1985, 20, 39) with minor modifications.
The tissue sample frozen in nitrogen is finely powdered either manually in a mortar cooled also with liquid nitrogen or mechanically in a specialized mill (Cryomill) immersed in liquid nitrogen. All the process is run in dim light (the vortex device is covered with aluminium foil).
An internal standard is added before the extraction: 200µl of a 1 mg/ml ethanol solution of vitamin K1 for about 200 mg liver sample.

The hexane extract is evaporated under nitrogen and dissolved in 200 µl of a mixture chloroform/methanol (1/3). When the total lipid content of the extract is low (poorly visible), the dried extract can be redisolved in the HPLC eluant.

HPLC system: a reversed phase column is used, 12.55 cm x 4 mm Lichrocart Merck (5 µm Lichrosorb 100 RP-18). The elution is made with 2 isocratic solvants, during 9 min with aa mixture methanol/water (98/2) and during 25 min with ethanol/methanol/water (48/48/2).
The detection is made at 325 nm. 10 or 20 µl of lipid extract are injected.
A standard curve is obtained by injection of increasing amounts (50 – 400 ng) of vitamin A and vitamin A palmitate.
Below is given an example of a HPLC separation of vitamin A compounds from a rat liver extract. 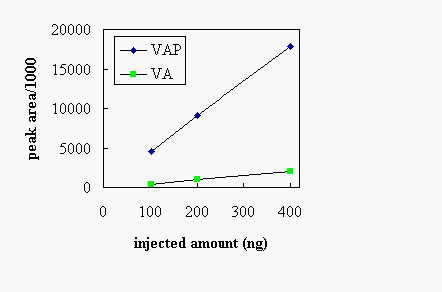 Standard curves obtained with increasing amounts of vitamin A (VA) and vitamin A palmitate (VAP) injected on the column and detected as previously described.

As various retinoids have geometrical isoforms with different biological actions, it could be important to determine each isomer separately. The assay of cis and trans isomers of retinoic acid and retinol was realized by HPLC (Lanvers C et al., J Chromatogr B 1996, 685, 233) and the separation and quantification of six retinoic acid isomers, three retinal isomers, and two retinol isomers were effected by HPLC with a silica gel column, a linear elution gradient and a UV detector at 350 nm (Miyagi M et al., J chromatogr B 2001, 757, 365).

An example of simultaneous determination of retinol, a-tocopherol, and b-carotene  by HPLC with diode-array detection may be found in the work of Gimeno E et al. (J Chromatogr B 2001, 758, 315).

A validated method has also been reported to determine simultaneously vitamin A and b-carotene in various matrixes presented by dietary supplements (Sundaresan PR, J AOAC Int 2002, 85, 1127). The proposedreversed-phase chromatography was capable to separate retinol from other derivatives such as retinyl acetate, retinyl palmitate, and b-carotene.

A review of the different extraction procedures of vitamin A as well as other fat-soluble vitamins in human fluids, foods and pharmaceutical preparations may be found by Luque-Garcia JL et al. (J Chromatogr A 2001, 935, 3). An extensive review of techniques of extraction and liquid chromatographic determination of natural retinoids in biological samples was released by Gundersen TE et al. (J Chromatogr A 2001, 935, 13).