A deacylated product of galactosylceramide (O-sphingosylgalactoside) is found in cerebral tissues and known as psychosine.

Psychosine, although absent from normal human brain is present in bovine brain. This deacylated cerebroside was shown to strongly inhibit protein kinase C while enhancing the activity of other kinases.  It was shown that galacto- and glucosylsphingosine modulate various physiological processes, such as calcium release, enzyme activities, and are also cytotoxic at low concentrations. An accumulation of this cytotoxic compound was found in the brain of the genetic galactosylceramidase deficiency disease in the dog and in human patients who had died from the Gaucher disease or the globoid cell leukodystrophy or Krabbe disease (Svennerholm L et al., J Lipid Res 1980, 21, 53). The hypothesis of a close connection between psychosine and this pathogenetic mechanism was even extented to other sphingolipidoses (review: Suzuki K, Neurochem Res 1998, 23, 251).
Another deacylated cerebroside, lactosylsphingosine, was detected in lipid extracts from bovine brain white matter (Hikita T et al., Neurochem Res 2002, 27, 575). This compound was shown to cause neuritogenesis of Neuro2a cells.

A systematic isolation of  cationic lipids in white matter extracts allowed to identify a class of new compounds related to psychosine, plasmalopsychosine (Nudelman ED et al., J Biol Chem 1992, 267, 11007). These compounds are up to 20 times more abundant in human brain than in bovine brain (Hikita T et al., Neurochem Res 2002, 27, 575). They are cyclic plasmalogens, an aliphatic aldehyde acetal being linked at different hydroxyl groups of the galactose residue of psychosine. Two major compounds were described having a 3,4- or a 4,6-cyclic acetal linkage. The fatty aldehyde chain which can be liberated by acid treatment may have 16 or 18 carbon atoms. One Kg of human brain contains about 3-4 mg of plasmalopsychosine. Studies have shown that they have no cytotoxic effect. It seems even possible that plasmalopsychosine may play an important role in development and maintenance of the vertebrate nervous system. It was shown that it has positive effects on neurite outgrowth and is efficient in preventing apoptosis in some cells (Sakakura C et al., J Biol Chem 1996, 271, 946). 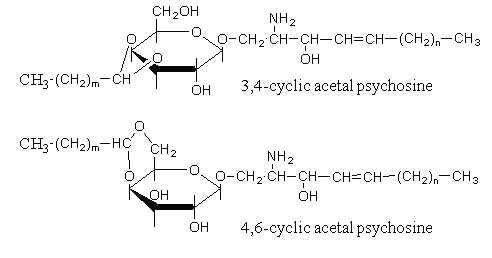 A plasmal conjugate to glycerol and psychosine has been described in the white matter of bovine brain (about 0.5 mg per gram wet weight) (Hikita T et al., J Biol Chem 2001, 276, 23084). The structure of that compound was identified as an O-acetal conjugate of plasmal to the primary hydroxyl group of glycerol and to the 6-hydroxyl group of galactosyl residue of psychosine.