DESCRIPTION OF THE VARIOUS LIPIDS

No precise definition of the term lipid exists. In its broadest sense, “lipid” defines substances
as oils, fats and waxes which can be only characterized by a large array of properties. They are in general

– coming from animals and plants living or fossilized, but they can also be produced
by chemical synthesis,

Lipids are one of the three main classes of food, besides carbohydrates and
proteins. They are responsible for storing energy that animals do not immediately
need.

Do You search information on
one particular lipid ?

Do You search information on sources and
composition of fats and oils ?

Do you want to learn more ?
See below

It can be considered that in 1786, the birth date of ME Chevreul the chemistry of lipids was unknown. The same year, in his treatise “Eléments d’histoire naturelle et de chimie“, Fourcroy AF indicated that fats (“corps gras”) may be classified in pure fatty oils (olive, almond, rape), siccative oils (linseed, walnut, poppy-seed, hemp-seed) and solid oils or butter (coprah, cocoa). In 1791, Jean Senebier, a famous Swiss clergyman
and scientist, reported in the Encyclopédie méthodique, Physiologie végétale (t.1, Paris 1791) a classification of oils. They are separated into essential and greasy oils. Below there is an extract of that book where the physical and chemical properties of true oils are described. 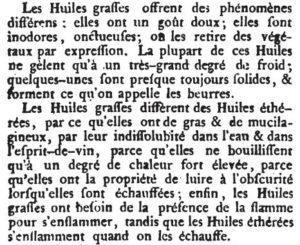 In 1823, in his famous treatise “Recherches chimiques sur les corps gras d’origine animale”, Chevreul noted that the term “corps gras” (fats) may be defined (not very different from Senebier) as compounds burning with an important flame and giving lamp-black, soluble in ethanol but not in water. After making a distinction between oils, butters, solid fats, tallow, waxes, resins, volatile oils and balms, he said: “On voit, d’après ce qui précède, combien l’expression de corps gras est vague, et l’impossibilité où l’on est d’en donner une définition
scientifique” (“It can be seen from the previous description how the term “corps gras” is vague and that it appears impossible to give a scientific definition of it”). Today, the situation is not very different !!. Then, Chevreul gives what it may be considered as the first scientific
classification of fats, based on acidity, volatility and the ability to be saponified. He defines two divisions and six groups. The first division (acid fats) contains long-chain and medium-chain fatty acids, the second one neutral fats) being divided into four groups : cholesterol, waxes, long-chain and medium-chain triglycerides.

More than one century later, in 1947, Hilditch TP in his famous book on “The chemical constitution  of natural fats” (Chapman and Hall Ltd, London) claimed that “unanimity has not yet been reached in the terminology to be adopted in classifying the various types of naturally occurring compounds in which fatty acids are present … even a collective title for the whole group is not completely settled“.

At that time Hilditch proposed that the term lipid should be used, as it was for the first time in 1926 (Lipid excretion III. Further studies of the quantitative relations of the fecal lipid, Sperry WM, J Biol Chem 1926, 68, 357), discarding the terms lipoids (British origin) and lipins (American origin). It is important to remind that the earliest use of the word protein was in 1868 and that of carbohydrate in 1869. Interestingly, the term “lipin” persits in “oxylipin” and “cardiolipin”. Hilditch stated that the collective name “lipid” is for natural products in which the higher fatty acids are present as essential compounds. He reserved the term fats for natural triacylglycerols, solid or liquid. Lipids were organized into two sub-groups, the simple lipids, including fats and waxes (ester waxes, sterols, alcohols), and the compound or complex lipids, including phosphatides and cerebrosides.

They contain frequently three or more chemical identities (i.e. glycerol, fatty acids
and sugar, one long chain base, one fatty acid and one phosphate group…) and have polar properties. Some contain only two components but including a sugar moiety.
They can be divided into three main groups:

This global classification is fairly comprehensive but remains only a guide, some lipid compounds being labeled in class 1 by someone and in class 2 by others.

Another ancient classification, frequently used in the lab, is founded on the well known ability of some lipids to be hydrolyzed by basic solutions into compounds (i.e. one glycerol and one, two or three fatty acids), they are said saponifiable. The others are resistant to this type of treatment (they are unsaponifiable). There are several crossing-over between the two classifications since polar lipids can be saponifiable or not (the same for neutral lipids).