Gangliosides are the group of glycosphingolipids that show the greatest structural variation and also the more complex structure. Except some echinoderms, gangliosides are characteristic of vertebrate nervous tissues.
This group includes molecules composed of ceramide linked by a glycosidic bond to an oligosaccharide chain containing hexose and N-acetylneuraminic acid (NANA, acidic sugar known also as sialic acid) units.

These glycosphingolipids were discovered and named by Ernst Klenk ( Z Physiol Chem 1942, 273, 76) after their isolation from brain tissue (they account for about 6% of the lipid weight). Klenk identified sphingosine, fatty acid, hexose and a substance, which was called neuraminic acid, and which gave a purple color with Bial’s reagent. This acid was later identified to be the same compound as the sialic acid isolated by Blix from mucin. Other investigators have since found these lipids on all cell membranes in all tissues. The heterogeneity of the brain ganglioside fraction was first shown by Svennerholm in 1956 (Nature 1956, 177, 524). A typical ganglioside is shown below, referred to as GM1 according to the adopted shorthand nomenclature (Svennerholm, Comprehensive biochemistry, vol 18, Elsevier, 1970).

Below is recalled the structure of the most important gangliosides found in nervous tissue and other locations.

The Svennerholm shorthand is used (on the right part) where G is for ganglioside, M for monosialo-, D for disialo- and T for trisialo-ganglioside. Cer, ceramide; Glc, glucose; Gal, galactose; GalNAc, N-acetyl galactosamine; NANA, sialic acid; the number 1, 2 or 3 characterizes the carbohydrate sequence.

The major long-chain bases are sphingosines with 18 or 20 carbon atoms. The fatty acid is in a large proportion stearic acid (about 90% in the brain). The main gangliosides of the brain are GM1, GD1a, GD1b and GT1. GM3 is present mainly outside brain tissues. Human normal cells cannot synthesize N-glycolyl-neuraminic acid, an analog of acetyl-neuraminic acid, but tumor cells do that synthesis. It has been shown that a shift from the glycolyl to the acetyl derivative may impair tumor development (Casadesus AV et al., Glycoconj J 2013, 30, 687).

In examining brain belonging to various vertebrate classes, it was found that the ganglioside content roughly corresponds with increasing complexity of the nervous system but that the ganglioside composition is strikingly reduced over phyletic lines. Furthermore, lower vertebrates show only little variation in the ganglioside pattern between the different brain structures, whereas in higher vertebrates differences distinctly occurred (Hilbig R, Comp Biochem Physiol 1984, 77B, 151).
There exists abnormal conditions in which genetic defects in catabolism lead to ganglioside accumulations. In generalized gangliosidosis, GM1 accumulates in the nervous system leading to mental retardation and liver enlargement. GM2 accumulation can result from inherited defects in either the hexosaminidase a or b subunit, or in the GM2 activator protein, leading to Tay-Sachs disease (B variant), Sandhoff disease (O variant), or GM2 activator deficiency (AB variant), respectively. These pathologies lead to mental retardation and blindness.

Gangliosides are characterized by a high amount of stearic acid (C18, about 80%), the rest being C16, C20 and C22. They contain no hydroxy fatty acids.

GM3 was demonstrated to regulate the human EGF receptor by preventing the autophosphorylation of the intracellular kinase domain in response to ligand binding (Coskun U et al., PNAS 2011, 108, 9044). That ganglioside is present in bovine milk at a concentration of up to about 1 mg/L (Lee H et al., J Agric Food Chem 2013, 61, 9689). GM3 is dominantly expressed in insulin responsive organs such as skeletal muscle liver and adipose tissue as well as lymphocytes in human. It has been demonstrated that the molecular pathogenesis of type 2 diabetes and insulin resistance interact with insulin receptor and GM3 ganglioside in adipocytes (Inokuchi JI, Glycoconjugated J 2014, 31, 193).
GD1a and GT1b were determined to be specific ligands for the myelin-associated glycoprotein, complex which inhibits nerve regeneration (Vyas  et al., PNAS 2002, 99, 8412). The knowledge of this mechanism may provide novel approaches to enhance nerve regeneration after injury.
GD3 was shown to contribute to mitochondrial changes leading to apoptosis (De Maria R et al., Science 1997, 277, 1652). During apoptosis, GD3 is rapidly synthesized from ceramide by a sialyltransferase resident in the Golgi, the GD3 synthase; then, it relocates to mitochondria where it contributes to the opening of the mitochondrial permeability transition pore complex, with consequent release of apoptogenic factors (Mallisan F et al., Biochim Biophys Acta 2002, 1585, 179). That ganglioside is abundant in bovine milk as its concentration reaches about 15 mg/L (Lee H et al., J Agric Food Chem 2013, 61, 9689).

Anti-ganglioside antibodies were first detected in the serum of patients with the autoimmune neuropathy called Guillain–Barré syndrome in 1988 (Ilyas AA et al., Ann Neurol 1988, 23, 440). Evidence to support their importance has grown over several decades, including clinical–serological studies and animal models. Various aspects of these interactions have been reviewed (Rinaldi S et al., Prog Lipid Res 2010, 49, 87).

The gangliosides have also the property to bind specifically to some bacterial toxins, such as those related to botulism, tetanus and cholera. The most known example is that of the cholera toxin whose the unique receptor known on the surface of the intestinal cells is GM1. On the reverse, gangliosides deriving from lactosylceramide (but with no more than three sialic acid residues) which are in HIV-1 membranes are the recognition pattern for capture by dendritic cells (Izquierdo-Useros N et al., Plos Biology 2012, 10:e1001315).

A new glycolipid described as a glycosyl inositolphosphoceramide-type ganglioside was studied in a lipid extract from the feather star Comanthus japonica (Arao K et al., Chem Pharm Bull 2004, 52, 1140). The structure of this uncommon trisialo ganglioside was determined to be :

The ceramide moiety was shown to contain C16 sphingosine and C22:0-C24:0 fatty acid. Furthermore it exhibited neuritogenic activity in the presence of nerve growth factor.

An unusual GM2 derivative, taurine-conjugated GM2, (tauro-GM2), has been described in brain samples from patients with Tah-Sachs disease (Li YT et al., J Biol Chem 2003, 278, 35286). The structure of that novel ganglioside was established to present the carboxyl group of N-acetylneuraminic acid amidated by taurine (see below). 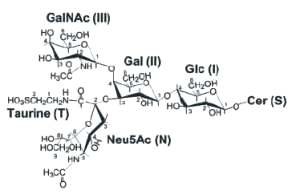 The presence of tauro-GM2 in Tay-Sachs brains, but not in normal brains, indicates the possible association of this compound with the pathogenesis of that disease. As the amount of GM2 is largely increased (from 20 up to about 1000 nmol/g wet brain tissue), neural tissues may contend with this highly concentrated GM2 in using taurine conjugation as a  mean to remove the excess of GM2 but in accumulating a new compound with possible toxic surfactant properties.

Unique gangliosides have been described in echinoderms (sea urchin, starfish). Curiously, these gangliosides contain in sea urchin, besides sialic acid, only glucose as sugar component. Furthermore, sialic acid is internally situated or bound to the terminal glucosyl group. A review of these glycosphingolipids in echinoderms may be found by T Hori et al (Prog Lipid Res 1993, 32, 25).