Pressurized fluid extraction is similar to Soxhlet extraction, except that the solvents are used near their supercritical region where they have high extraction properties. In that physical region the high temperature enables high solubility and high diffusion rate of lipid solutes in the solvent, while the high pressure, in keeping the solvent below its boiling point, enables a high penetration of the solvent in the sample. Thus, PFE permits a high extraction efficiency with a low solvent volume (15-40 ml) and a short extraction time (15-20 min). That procedure is also known as “Accelerated Solvent Extraction” (ASE). This procedure was first developed by Dionex (Richter BE et al., Anal Chem 1996, 68, 1033) and validated on a commercially-available, automated extraction system (Dionex ASE).
With the same solvent mixture employed in the Folch procedure, the pressurized solvent extraction of total lipids in poultry meat reduced the consumption of solvents and the time extraction while it has given similar lipid recoveries and fatty acid compositions (Toschi TG et al., Food Chem 2003, 83, 551). 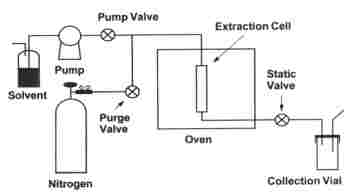 The PFE device includes an extraction cell (1 up to 100 ml) maintained at a temperature between 80 and 200°C into which a solvent is pumped and maintained at 10-20 MPa for some minutes. Then, the extract is pushed into a collection vial by a second volume of solvent and finally the whole solvent is pushed with an inert gas flow.
As for SFE, an inert matrix must be added (kieselguhr, celite) if some moisture is present in the sample.

Lower pressure and solvent temperature are used in the ANKOM fat analyzers. A batch processing can be accomplished by encapsulating the samples in filter bags. The filter bag and sample are weighed before and after the extraction, the weight loss corresponds to the lipid content.

PFE was initially used for environmental contaminants (EPA Method 3454: herbicides, pesticides, hydrocarbons…) in soils, sediments and animal tissues but is now frequently used for food (meat, seeds, feeds…), pharmaceutical products, and several other biological samples. This technique was shown to be suitable to replace the Folch extraction for oxysterols in food (Boselli E et al., J Chromatogr A 2001, 917, 239) and carotenoids in plants (Denery JR et al., Anal Chim Acta 2004, 501, 175). The efficiency of extractions with pressurized solvents (hexane, methylene chloride, isopropanol, ethanol) of polar and nonpolar lipids was examined in corn and oats kernels (Moreau RA et al., JAOCS 2003, 80, 1063). The effects of solvent polarity and temperature were tested on the recovery of total lipids, triglycerides, glycolipids, and phytosterols.

A review exploring analytical applications of this extraction technique for contaminant compounds and matrix components in food and biological samples may be consulted (Carabias-Martinez R et al., Journal of Chromatography A, 1089 (2005) 1–17).

A new fractionation scheme for lipid classes was proposed (Poerschmann J et al., J Chromatogr A 2006, 1127, 18). Basically, a two-step pressurized liquid extraction was combined with an in-cell fractionation using silica-based sorbents (silicic acid or cyanopropyl silica) placed at the outlet of the separation cartridge. The extraction consists of 2 cycles of hexane/acetone at 50°C to obtain neutral lipids followed by 2 cycles of chloroform/methanol at 110°C to obtain polar lipids.

Greener extraction alternatives for microalgae biomass were investigated, using either ultrasound assisted extraction and pressurized liquid extraction with different biobased solvents (Blanco-Llamero C et al., Marine Drugs 2021, 19, 107). The best oil yields for both techniques were achieved with the mixture of 2-MeTHF:ethanol (1:3), while for the extraction of glycolipids, ethanolic extracts containing higher amounts of glycolipids and EPA were the most efficient.

PFE has not been widely applied as a routine tool in natural product extraction but as it uses less solvent in a shorter period of time and in oxygen and light-free environment, it has the potential to be a powerful tool in industry. An adaptation of classical extraction procedures for use with PFE toward the use of about 100 mg of tissue was proposed (Dodds ED et al., JAOCS 2004, 81, 835). Using gravimetry and fatty acid analysis, it was proven that efficient results were obtained with chloroform/methanol (60/40) as solvent mixture for fish tissue extraction.

A comparison between PFE and the Folch procedure for the extraction of cereal, egg yolk and chicken muscle revealed that higher fatty acid contents were obtained with a mixture of isopropanol/hexane for cereal and egg yolk, however, a chloroform/methanol mixture was more efficient with muscle samples (Schäfer K, Anal Chim Acta 1998, 358, 69). A comparison with soxhlet and ultrasound-assisted extractions showed that pressurized liquid extraction was more effective for terpenes, fatty acids and vitamin E contained in leaves of Piper sp. (Flores Peres V et al., J Chromatogr A 2006, 1105, 115).
The quantitative measurement of fatty acids in human plasma and erythrocytes has been efficiently made using solvent extraction in a ASE system (Kuriki K et al., Lipids 2006, 41, 605).
Pressurized extraction of sterols in marine sediment samples was shown to give recoveries higher in comparison to soxhlet extraction (Li D et al., J Chromatogr A 2007, 1160, 64).
Detailed applications notes on the extraction of fats from dairy products, meat, chocolate, oilseeds, and various food matrices can be downloaded from the Dionex web site.

As the operating conditions of PFE are similar to those of Soxhlet extraction, this technique is continuously in development despite the need of an expensive specialized equipment.