Triacylglycerols are the most abundant lipids in nature, and as they are commercially of up most importance, much effort has been applied to the knowledge of molecular species. This represents a very complex problem as, with only 5 different fatty acids 75 different molecular species can be formed (not including enantiomers).
Triacylglycerols from natural source may contain a wide range of fatty acids as in milk, special animal fats and special seed oils. These aspects are reviewed in specialized books (Progress in the chemistry of fats and other lipids, vol 12, Pergamon Press, 1972 – Handbook of lipid research, Hanahan DJ and Kuksis A, vol 1, Plenum Press, 1978). Improved separations are obtained with a combination of techniques such as argentation chromatography followed by GLC or HPLC. A two-dimensional combination of silver-ion and non-aqueous reversed phase HPLC with mass spectrometric detection has been proposed to the determination of triacylglycerol profiles in complex food matrices (Mondello L et al., J Chromatogr A 2005, 1086, 91).

Separation of simple mixtures of triacylglycerol molecular species are easily achieved on reversed-phase chromatography with C18 as the stationary phase and with various mobile phases. Thus, in fish oil, fifteen kinds of molecular species were isolated using HPLC with a triacontyl silane column and a mixture of ethanol and acetonitrile as an isocratic mobile phase (Aoki T et al., J Oleo Sci 2004, 53, 285).
We used a 250 x 4 mm C18 column (LiChrosorb RP18, 5 µm Merck) and a mixture of dichloromethane/acetonitrile (45/55, v/v) as mobile phase at 25°C. When the lipid sample includes fatty acids with 3 double bonds (linoleic acid), the separation is improved when the column is termostated at 15°C. As example, we give below separations of some vegetal oils. Samples are dissolved directly in the mobile phase before injection. The detection was made with a light scattering detector (DDL 21, EUROSEP) with a drift tube temperature of 65°C.
Application notes with details on the detection of triglycerides from palm oil with a light scattering device (Corona Charged aerosol detector) may be found on the manufacturer web site.
Quantification is made using a trilinoleine solution as standard. The slopes of the lines for different molecular species are not parallel. Furthermore, it was reported that the post-column addition of cholesterol may lead to a linear response curve making quantitative analysis of triacylglycerol species easier (Heron S et al., J Chromatogr A 2004, 1035, 221).
Despite the restricted number of molecular types examined, we have established some relationships with the fatty acyl chain structure. Thus, at equivalent unsaturation, the longer the carbon chain, the lower the b coefficient and, at equivalent chain length, the more unsaturated the triacylglycerols, the lower the b coefficient.

HPLC separation of a sunflower oil 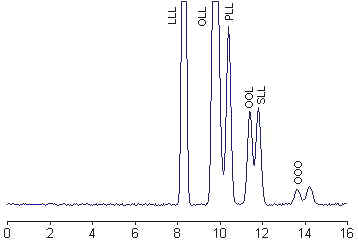 HPLC separation of an olive oil 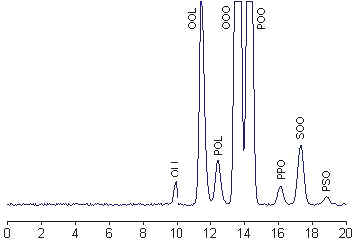 Triacylglycerols are classically named using three letters indicating the diversity of the acylated fatty acids, for example the homogeneous LLL, OOO, PPP, SSS or the heterogeneous OOL, SOO or PSO: L for linoleic acid, O for oleic acid, P for palmitic acid and S for stearic acid.
Under isocratic conditions, the logarithm of the elution volume (or retention time) of a molecular species is directly proportional to the number of carbon atoms (CN) and inversely proportional to the total number of double bonds (DB) in the three fatty acyl chains. Furthermore, a linear relationship exists between the equivalent carbon number (ECN) and the carbon number of the triacylglycerol which showed the same unsaturation characteristics.
ECN is defined as: ECN = CN – n DB, where n is the factor for double bond contribution and is close to 2. No distinction is made between triacylglycerols which are positional isomers. The straight lines, corresponding to ECN as a function of the logarithm of the retention time, for different unsaturation degrees are parallel. Tracing these parallel lines from known triacylglycerols, from commercial or natural sources, permits theoretically the identification of unknown molecular species on the chromatogram. The HPLC analysis of some common vegetal oils and the comparison of the results with previously reported data are a precious help before undertaking serious investigations. Several examples of analysis can be found in books and journals (Food analysis by HPLC, Nollet LML ed., Marcel Dekker, NY, 1992). Discrimination of eight vegetal oils using HPLC and light-scattering detection was proposed as an adequate method for quality control and a useful tool for adulteration studies (Cunha SC et al., Food Chem 2006, 95, 518).
An improved method for the determination of species composition of olive oil was reported using propionitrile as HPLC eluent and refractive index detector (Moreda W et al., Grasas y Aceites 2003, 54, 175).
Unfortunately, difficulties arise as a result of the complex mixtures of varying molecular structure caused by varied acyl chains. One of these difficulties is the formation of “critical pairs” with close behavior on reverse phase chromatography. These critical pairs have the same ECN. This includes species which contain one or more “critical” fatty chains such as triolein, palmityldiolein and tripalmitin, all having the same ECN of 48.

To solve this important problem, in conjunction with HPLC, a silver ion chromatography has been valued because it permits separation of distinct molecular species differing solely in the degree of unsaturation. It is thus possible to fractionate natural fats and oils by TLC or low pressure chromatography on AgNO3 impregnated silica gel. The fractions containing several molecular species with acyl chains of various length but of the same unsaturation, thus without “critical pairs”, are later analyzed by HPLC as explained previously.

A up to date survey of the most important papers devoted to triacylglycerol analysis with light-scattering detector may be found on a special page.

Separation of groups of molecular species

We describe below a simple procedure modified from Christie (J Sci Food Agric 1990, 52, 573) in which a commercial solid phase extraction column is converted to the silver ion form and molecular species are separated by stepwise elution.

An improved comprehensive two-dimensional HPLC system, combining Ag-coated cation exchanger and reversed-phased column, was also proposed to improved the separation of a maximum number of molecular species in a vegetal oil (Van der Klift E et al., J Chromatogr A 2008, 1178, 43). Up to 44 compounds could be detected in corn oil.

An analysis of model triacylglycerol positional isomers as brominated derivatives by HPLC was reported (Neff WE et al., J Chromatogr A 2001, 912, 187). Satisfactory results were obtained for the resolution of position isomers like sat-sat-unsat from sat-unsat-sat. Further experiments would be necessary with known more complex molecular species.
A review on the regio- and stereospecific analysis of triacylglycerols using mass spectrometry may be read for modern technologies (Kuksis A et al., Methods 2005, 36, 172). The use of lithiated adducts and electrospray ionization has also been described (Lin JT et al., J Agric Food Chem 2008, 56, 4909).

A quantification method for triacylglycerol molecular species in fish oil was described comparing ultraviolet detector and evaporative light scattering detector (Gotoh N et al., J Oleo Sci 2006, 55, 457). The results by UV and light scattering detector were almost the same for all triacylglycerol molecular species, but the chromatogram area percent method did not give similar results when applied to fish oil.