Before the separation of sterols by HPLC it is of prime importance to isolate the sterol fraction by a saponification step and, if necessary, followed by a TLC on silica gel.

Sterols are easily purified by TLC on silica gel 60 plated developed in dichloromethane. The spots corresponding to sterols are eluted by 2 times 3 ml of hexane/diethyl ether (1/1, v/v). After evaporation of the solvent, the residue is dissolved in a known small volume of acetonitrile/methanol (1/1, v/v).

The separation is made on a reversed phase column (Lichrospher 100RP18, Merck, 250×4.6 mm, 5µm) thermostated at 51°C with acetonitrile/methanol (50/50, v/v) containing 3 % water (v/v) as mobile phase. The flow rate is 1 ml/min.
A light scattering detector and an electronic integrator are used to quantify the sterol fractions. The oven of the detector is set at 60°C. Air pressure: 1.5 bar.
Standard solutions of cholesterol are used (loop volume: 50 µl) to draw a calibration curve in the range 0-10 µg per injection. In this range the responses are not linear, a linear log/log calibration curve is thus established. 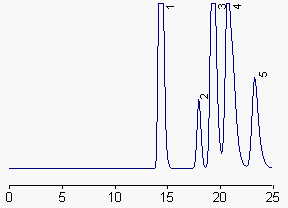 A partial separation of ergosterol and desmosterol can be obtained in setting the column temperature at 35°C, but cholesterol and stigmasterol are not so well separated.
To analyse animal extracts, the column is run at 35°C.

A modification of that method was reported which allows the separation and quantification of fucosterol in edible seaweeds (Sanchez-Machado DI et al., Biomed Chromatogr 2004, 18, 183).

A sensitive and simple method for the determination of cholesterol in biological samples has been described (Dong J et al., J Chromatogr B 2007, 858, 239). This method is based on the pre-column conversion of cholesterol into cholest-4-en-3,6-dione (Jones oxidation) followed by HPLC and UV detection. The reaction was applied to the analysis of total and free cholesterol in serum and lipoproteins. It must be noticed that campesterol, sitosterol and cholestanol interfere with cholesterol determination, thus restricting that simple procedure to animal tissue extracts.

An application note with details on the detection of cholesterol with a universal mass detector (Corona Charged aerosol detector) may be found on the manufacturer web site.

An important review of published chromatographic methods for the analysis of plant sterols may be found in the paper by Abidi SL (J Chromatogr A 2001, 935, 173) and that by Volin P (J Chromatogr A 2001, 935, 125).
A highly sensitive method for quantification of all phytosterols contained in a lipid extract has been described (Liu S et al., Chem Phys Lipids 2013, 166, 18). The high sensitivity was achieved by introduction of a chromophore to phytosterols through an instant derivatization of the hydroxyl group with benzoyl chloride. The derivatized phytosterols have strong UV absorption and can be selectively detected in 3.5 min after HPLC on a normal phase column by a common UV detector (254 nm). This method was very sensitive and the detection limit reached the ng level.