Lipids bearing a sulfur atom are an interesting group since they are said to be found in acidic membranes, i.e., membranes with a surface at a strongly acidic pH (about 2). Under these conditions carboxylic acids are in their un-ionized forms, but the sulfolipids with sulfate or sulfonic acid groups exist at least partially in the anionic form. Sulfolipids are found in fungi, algae, bacteria, the chloroplast of higher plants, but also in some mammalian cells.

A new type of sulfolipid was discovered in 1959 in the microalga Chlorella at the Scripps Institute of Oceanography (San Diego, Ca, USA) (Benson AA et al., Proc Natl Acad Sci USA 1959, 45, 1582). That lipid, sulfoquinovosyl diacylglycerol (SQDG), was shown to be derived from MGDG but with a sulfonic acid linkage on the galactosyl moiety. It was shown to be present in the thylakoid membranes of all lower and higher plants. Thus, photosynthetic membranes of plants, algae, cyanobacteria, and some fungi among the Basidiomycetes (Coprinus, Psalliota, Clitocybe) contain large amounts of that sulfolipid.

This lipid is the only lipid with a sulfonic acid linkage. It consists of a monoglycosyldiacylglycerol with a sulfonic acid in position 6 of the monosaccharide moiety. The sulfonoglucosidic moiety (6-desoxy-6-sulfono-glucoside) is described by the adjective sulfoquinovosyl (quinovose : 6-deoxy-D-glucose). R1 is frequently palmitic acid, R2 being the unsaturated chain (most often 16:3n-3).
A review summarizes recent research defining the mechanism for SQDG biosynthesis and its biological function in higher plants, particularly under phosphate-starved conditions (Shimojima M, Prog Lipid Res 2011, 50, 234).

An extract of the marine chloromonad Heterosigma carterae (Raphidophyceae) was shown to contain a complex mixture of sulfoquinovosyl diacylglycerols (Keusgen M et al., Lipids, 1997, 32, 1101). The main fatty acyl groups consisted of 16:0, 16:1(n-7), 16:1(n-5), 16:1(n-3) and 20:5 (n-3). Sulfoglycoglycerolipids were described in the green algae Elakatothrix and Zygnema and in some Phaeophyta (Fucus, Pelvetia).

Occurrence of SQDG has been demonstrated in the symbiotic bacteria Rhizobium meliloti as well as in other strains of symbiotic Rhizobiaceae (Cedergren RA et al., J Lipid Res 1994, 35, 1452). Taking into account this first report of the presence of SQDG outside the plant kingdom, photosynthetic bacteria or diatoms, a role for that sulfolipid may be suggested in the Rhizobium/legume relationship. Some sulfate esters are also found in halophilic bacteria (Halobacterium), but they have two alkyl diphytanylether chains (Haines TH, in CRC handbook of microbiology, vol. 5, CRC Press 1979).
SQDG forms were also extracted from a sea urchin (Scaphechinus mirabilis) (Logvinov SV et al., Chem Nat Comp 2012, 48, 175). The carbon chains included saturated (14:0 to 24:0) and mono-unsaturated fatty acids (20:1 to 24:1).

Naturally occurring sulfoquinovosylglycerolipids have come to be considered promising compounds for cancer therapy and prevention due to their good bioactivities. For example, SQDGs isolated from a marine red algae, higher plants of pteridophyte, and spinach, were proved to have inhibition on replicative DNA polymerase and antiproliferative activity toward human cancer cells (Zhang J. et al., Mar Drugs 2014, 12, 3634).

The concentrations of these sulfated glycolipids in testis and spermatozoa are about 0.3-1 mmole/g wet tissue (3% of total lipids and more than 90% of total glycolipids in mammalian testis).
In brain and in testis, the sulfoglycoglycerolipids occur as a mixture of alkylacyl (seminolipids) and diacyl glycerol. These compounds could be associated in the nervous system with the process of myelination (Pieringer J et al., 1977, 166, 421). Evidence was provided that seminolipids are essential for normal spermatogenesis in mice (Fujimoto H et al., J Biol Chem 2000, 275, 22623).

A tauroglycolipid has been isolated from a seawater bacterium Hyphomonas jannaschiana which is devoid of phospholipids (Batrakov SG et al., Biochim Biophys Acta 1996, 1302, 167). The structure of that lipid, shown below, was determined to be 1,2-diacyl-3-glucuronopyranosyl-glycerol taurine-amide. Its main fatty acyl chains are 16:0, 16:1n-7, 18:0, 18:1n-7 and 19:0. 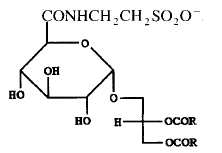