While sphingolipids from animals and plants have a sphingoid base as common feature, some specific glycolipids with a dimeric amino alcohol were described in various marine sponges.

The two-headed sphingolipids linked to a galactose residue found in marine sponges form a new series having rhizochalin as the representative component.
The first member of that series has been described in 1989 in the marine sponge Rhizochalina incrusta (Makarieva TN et al., Tetrahedron Lett 1989, 30, 6581). It has antimicrobial and cytotoxic properties. Some analogues from the same animal were shown to be anticarcinogenic and proapoptotic agents (Fedorov SN et al., Lipids 2009, 44, 777).

These sphingolipids with a two-headed amino alcohol  were shown to have high biological activities (antifungal, cytotoxic or DNA-damaging agent).

Among the dominant immunogen  glycolipids of many mycobacteria are the glycopeptidolipids, based on the so-called mycoside C, a monoglycosylated fatty acylated peptide which is further modified by small variable oligosaccharides (Brennan PJ et al., Eur J Biochem 1980, 115, 7). This oligosaccharide moiety is known to be responsible for the serospecificity of all immunotypes in the M. avium/M. intracellulare/M. scrofulaceum complex (Brennan P J et al., J Biol Chem 1981, 256, 6817).

Glycopeptidolipids have the general formula given below :

The basic structure of these glycolipids has been established by several groups of French investigators in the period 1967-1971, the re-definition of their structures being made by Brennan PJ et al. (Brennan PJ et al., J Biol Chem 1979, 254, 4205). Thus, there are several major species which have the same basic tetrapeptide core (Phe-aThr-Ala-alaninol linked to a rhamnose group)  but differ in the nature of the glycosyl residue attached to the threonyl group (from one up to six units). In addition, the fatty acyl substituent consists mainly of 3-hydroxy or 3-methoxy type and a 28 carbon chain.

A second family of glycopeptidolipids has been discovered in M. xenopi (Rivière M et al., Biochemistry 1992, 31, 3575). It consists of alkali-labile serine-containing glycopeptidolipid whose structure differs greatly from those of mycosides-C.

Unusual glycopeptidolipids containing rhamnose have been isolated from Myxococcus sp. (Ohlendorf B et al., J Nat prod 2009, 72, 82). These compounds, named myxotyrosides, have a normal or an iso-branched fatty acid amide-linked to a glycosylated tyrosine-derived structure. One of them is shown below. 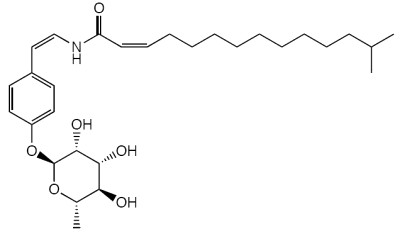