This simple phospholipid was discovered and its exact structure described in 1927 for the first time in living materials, thanks to an artifact (phospholipase D action during extraction) in the ether-soluble substances of cabbage leaves.

It must be specified that this phospholipid, containing two stearic acid molecules, was synthesized as early as 1883 (Hundeshagen, J Prakt Chem (2) 1883, 28, 219) and later was used in attempts to synthesize “lecithin”.

This group is characterized by molecules which could be considered as derivatives of the parent and simplest compound 1,2-diacyl-sn-glycerol-3-phosphate (phosphatidic acid or glycerophosphoric acid).

R1 and R2 are identical or different fatty acids

When one fatty acid is removed, this phospholipid forms a lysophosphatidic acid (1- or 2-acyl-sn-glycerol-3-phosphate).
This group has the basic glycerophosphatide structure, is a negatively-charged (or acidic) lipid and is the metabolic precursor of all the other similar molecules. It was primarily thought that phosphatidic acid might characterize plant lipids but this was shown later to be an artifact formed by phospholipase D action. Most natural sources contained only small amounts of phosphatidic acid (1-2%) if technical precautions are observed.

Phosphatidic acid and its lyso derivatives are considered to have signaling properties whose the importance in cell biology is progressively growing (review in Hla T et al., Science 2001, 294, 1875).
Phosphatidic acid is a central precursor for the synthesis of major glycerophospholipids, diacyl- and triacylglycerols. Since the early work by Moolenaar WH et al. (Nature 1986, 323, 171), phosphatidic acid is progressively being recognized as an important lipid second messenger in animal systems as well as in plants (Munnik T, Trends Plant Sci 2001, 6, 227; Testerink C et al., Plant J. 2004, 39, 527). Several proteins, including protein kinases and small G-proteins, are activated by this lipid (for review, see McPhail LC et al., Biochim Biophys Acta 1999, 1439, 277).
It has been shown that phosphatidic acid ingestion may have a benefit on muscle strength improvement, mainly in trained individuals (Hoffman JR et al., J Int Soc Sports Nutr 2012, 9:47).

The deficiency in the enzyme lysophosphatidic acid acyltransferase-b, which catalyses the acylation at the sn-2 position of lysophosphatidic acid, is the biochemical characteristic of the genetically disorder Berardinelli-Seip congenital lipodistrophy. This rare syndrome is characterized by the absence of adipose tissue resulting in severe dyslipidemia, insulin resistance, hepatosplenomegaly and muscular hypertrophy (Agarwal AK et al., Nat Genet 2002, 31, 21). A performant mass spectrometry methodology has enabled the determination of  lysophosphatidic acid levels between 1.2 and 5.8 nmol/g protein in rat brain according to the fatty acid species (Aaltonen N et al., J Chromatogr B 2010, 878, 1145).

A plasmalogen derivative of lysophosphatidic acid (1-O-alk-1′-enyl-2-lyso-sn-glycero-3-phosphate), in which the carbon side chain is linked with a vinyl-ether bond to the glycerol backbone, was described to be a potent agent in mobilizing intracellular Ca in Xenopus oocyte and more recently, this alkenyl derivative was detected as physiological constituents of the biologic fluids bathing the cornea (Liliom K et al., Am J Physiol 1998, 274, C1065). 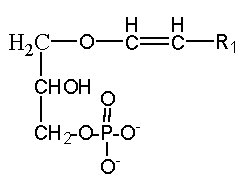 A parent compound, cyclic phosphatidic acid, was first identified in myxoamoebae of a true lime mold, Physarum polycephalum (Murakami-Murofushi K et al., J Biol Chem 1992, 267, 21512) and experiments have shown that it was a potent bioactive lipid at the nuclear level. Later, it was shown to be present in human serum albumin fraction where it may have biological activities related to the inhibition of cell proliferation (Kobayashi T et al., Life Sci 1999, 65, 2185). Furthermore, it has been demonstrated that cyclic phosphatidic acid is produced in blood by autotaxin, a serum phospholipase D that produces lyso phosphatidic acid (Tsuda S et al., J Biol Chem 2006, 281, 26081). Cyclic phosphatidic acid has shown an antiproliferative activity in fibroblasts (Murakami-Murofushi K et al., Biochim Biophys Acta 1995, 1258, 57) and an inhibitory activity toward cancer cell invasion and metastasis (Ishihara R et al., Int J Cancer 2004, 110, 188). A review of the cellular properties of that bioactive phospholipid may be consulted (Fujiwara Y, Biochim Biophys Acta 2008, 1781, 519). 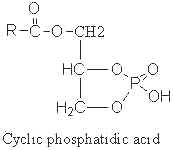 Another parent compound, pyrophosphatidic acid (or diacylglycerol pyrophosphate), was first isolated from the yeast Cryptococcus neoformans and was shown , through phosphatidic acid, to play a  role in phospholipid metabolism (Itoh T et al., Lipids 1977, 12, 809). 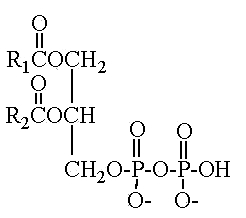 This compound 1,2-diacyl-sn-glycero-3-pyrophosphate was found in a limited number of species which belong to the asporogenous and ballistosporogenous yeasts but also in some basidiomyceteous mushrooms (Sugai A et al., Lipids 1986, 21, 666).

More recently, pyrophosphatidic acid was detected during phospholipase C and D activation in plants (Chlamydomonas), and its formation was correlated with the post-stimulation decrease in phosphatidic levels (Munnik T et al., J Biol Chem 1996, 271, 15708). The pyrophosphoric acid formation was suggested to be a mechanism which attenuates phosphatidic acid levels in plant cells, the fact that it is only formed upon cell activation suggesting that it could be implicated in plant cell signalling (Van der Luit AH et al., Plant Physiol 2000, 123, 1507). A similar hypothesis has been proposed after the detection of pyrophosphoric acid and its metabolism in Trypanosoma cruzi (Marchesini N et al. FEBS Lett 1998, 436, 377). Pyrophosphoric acid was shown to be the product of an enzyme, phosphatidate kinase, described initially in subcellular fractions of Catharanthus roseus cells (Wissing JB et al., Plant Physiol 1993, 102, 1243). Later experiments show that pyrophosphate is a second messenger of abscisic acid signaling in Arabidopsis thaliana suspension cells (Zalejski C et al., Plant J 2005, 42, 145).