These fatty acids were isolated and named by Stodola FH et al. (J Biol Chem 1938, 126, 506) from a waxy extract of human tubercle bacillus (Mycobacterium tuberculosis). Their common structure was elucidated in 1950 by Asselineau J (C R Acad Sci Paris 1950, 230, 1620) and shown to be formed  of a b-hydroxy-a-alkyl branched chain. 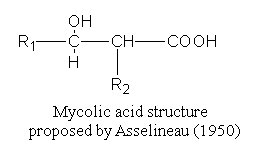 R1 may or may not contain another oxygenated group, such as hydroxyl, methoxyl, keto, or carboxyl group.

If mycolic acid was primarily described as a single component, now it form a broad family of over 500 species which form the major component of the cell wall of Actinomycetes forming a distinct suprageneric taxon that encompasses the genera Mycobacterium, Gordona, Nocardia and Rhodococcus. If Mycobacterium has mycolic acid with a range of functional groups, the other members of the mycolata family have simpler forms having only cis-double bonds.

Mycolic acids isolated from Mycobacterium are called mycolic acids (or eumycolic acids), they have 60-90 carbon atoms, while those from other species (Corynobacterium, Nocardia) which are shorter  are named corynomycolic (22-36 carbons) or nocardomycolic (44-60 carbons) acids.
A description of the various forms of mycolic acids found in Mycobacterium may be found in a review by Minnikin DE et al. (Arch Microbiol 1984, 139, 225).

The unsaturation and cyclopropanes may be either cis or trans (with adjacent methyl branch), they are also known as a-mycolic acids (see below).

Mycolic acids containing a methoxy group with double bond or cyclopropane ring are known as methoxymycolic acids (see below).

Mycolic acids known as wax esters contain a double bond or a cyclopropane ring and an internal ester group (see below).

It is now adopted that mycolic acids are localized in the inner leaflet of the mycobacterial cell wall either covalently bound or loosely associated with arabino-galactan polymers.
Mycolic acids have been involved in maintaining a rigid cell shape but also they contribute to the resistance to chemical injury and to the protection of cells against hydrophobic antibiotics (Isoniazid which inhibit mycolic acid biosynthesis are efficient antimycobacterial agents).

The stability of these fatty acids allows the study of the paleoepidemiology of tuberculosis in the antiquity (analysis from ancient skeletons).
Active research in this field are motivated by the discovery of new therapeutics against tuberculosis which remains a widespread pathology.

Furthermore, it is noticeable that mycolic acids were the first known CD1-presented antigen (Beckman EM et al. Nature 1994, 372, 691). Thus, mammalian T-cells can recognize a foreign lipid structure by a CD1-dependent mechanism. The review of Moody BD et al. (Immunol Rev 1999, 172, 285) can be consulted for further information.