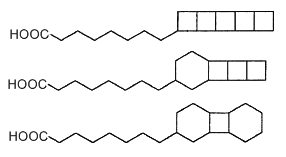 Such “ladderane” structures are unprecedented in nature and occur in bacterial membranes as free fatty acids, fatty alcohols, alkyl glycerol mono- or di-ethers, phosphocholine diether and phosphocholine ester/ether and phosphoethanolamine diether and phosphoethanolamine ester/ether (Boumann HA et al., FEMS Microbiol Lett 2006, 258, 297). They are supposed to protect the cell from the toxic anammox intermediates located in specialized organelles (anammoxosomes). These lipids seem to be limited to these bacteria which were shown to play an important role in the nitrogen cycle in the ocean (Kuypers M et al., Nature 2003, 422, 608). Therefore, they are considered to be the unique biomarkers for the process of anaerobic ammonium oxidation. They were detected in suspended particulate matter obtained from various water depths in the Arabian Sea (Jaeschke A., Limnol Oceanogr 2007, 52, 780) and in sediments (Hopmans EC et al., Rapid Comm Mass Spectrom 2006, 20, 2099).