Among cyclopropane acids, lactobacillic acid (11,12-methylene-octadecanoic acid) is found mainly in a gram-negative bacteria, Lactobacillus arabinosus, where it was discovered in 1951 (Hofman K et al., J Biol Chem 1951, 195, 473). but also in protozoa and in the seed oil of Byrsocarpus coccineus (Connaraceae) (Spencer GF et al., Lipids 1979, 14, 72). Its ring has some properties of a double bond and it may be disrupted by acids or halogens. In bacteria, lactobacillic acid is never accompanied by cyclopropene acids.

Cyclopropane fatty acids (mainly lactobacillic acid) were detected for the first time in milk (about 0.1% of milk fat) and they were present only in milk samples from cows fed with forages containing maize silage (Marseglia A et al., Food Chem 2013, 140, 711). Their determination can be proposed as a quality parameter of milk or feed.
The seeds of Litchi chinensis (Sapindaceae) from Reunion Island were shown to contain unusual amounts (35-48%) of an isomer of lactobacillic acid : cis-9,10-methylene-octadecanoic acid (Gontier E et al., Biochem Soc Trans 2000, 28, 578). That cyclopropane fatty acid is  also present in longan (Euphoria longana) seed oil (Grondin I et al., Oléagineux Corps gras Lipides 1997, 4, 459). Furthermore, it was shown that this fatty acid was preferentially located at the sn-2 position of the triglyceride molecules.

Chrysanthemic acid is a cyclopropane fatty acid that is related to a variety of insecticides. It is related to pyrethrin I and II, and pyrethroids. (+)-Trans-chrysanthemic acid, is the acid part of the ester pyrethrin I, which occurs naturally in the seed cases of the Asteraceae Chrysanthemum cinerariaefolium, called the Dalmatian chrysanthemum. The flowers are pulverized and pyrethrins, contained in the seeds, are extracted. Pyrethrins attack the nervous systems of all insects but have also insect repellent effects. 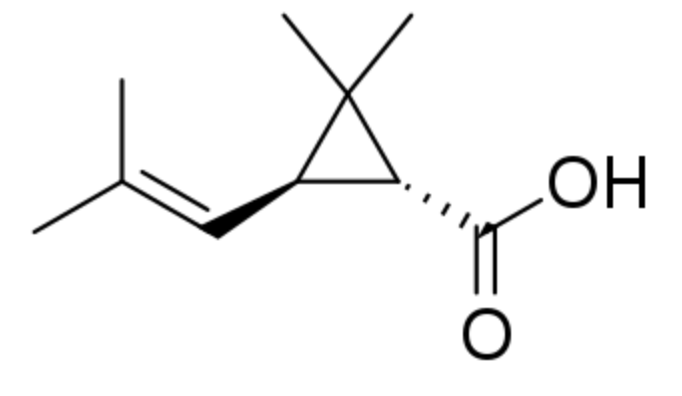 The 2-octylcyclopropane-1-carboxylic acid or olibanic acid is a cyclopropane acid which was found to be present (in cis and trans forms) in frankincense, they have a true olibanum smell (Cerutti-Delasalle C et al., Angew Chem Int 2016, 55, 13719). These cyclopropyl-derived acids provide the very characteristic old churchlike endnote of the frankincense odor. Frankincense (also known as olibanum) is an aromatic resin used in incense and perfumes, obtained from trees of the genus Boswellia in the family Burseraceae growing in South Arabia, Nubia, Ethiopia, Sudan and India. Nowadays, frankincense is still an important aromatic raw material for the perfume industry, where it is mainly used in the form of essential oil.

It must be noticed that the 2-methylundecanoic acid (Mystikal®) was patented in 2010 by the company Givaudan. This compound was described as “the only synthetic odorant with the smell of incense”. Chemically, it can be considered as a seco-analogue of olibanic acids.

Another cyclopropane fatty acid (9,10-methylene-hexadecanoic acid) was shown to be present in phospholipids of heart and liver mitochondria (Sakurada K et al., Biochim Biophys Acta 1999, 1437, 214). Its amount in bovine heart (about 4% of all fatty acids) is much greater than that in other tissues (less than 0.3%). The origin and the physiological role of these compounds remain unclear. Cyclopropane fatty acids have been also identified in human adipose tissue and serum (Sledzinski T et al., Lipids 2013, 48, 839). These compounds are stored in triacylglycerols but their origin remains unknown.

It is a potent inhibitor both in vitro and in vivo of SH-containing enzymes, such as Δ9-desaturase, an important lipogenic enzyme which controls fatty acids desaturation. Thus, sterculic acid is able to control the biosynthesis of monounsaturated fatty acids in inhibiting the convertion (i.e. stearic acid into oleic acid). this action altering membrane permeability and inhibiting cellular reproduction (Dewick PM, Medicinal natural products, J Wiley and Sons, NY, 2001). Some studies have shown that supplementation of sterculic acid to obese (ob/ob) mice reduces body weight and adiposity, improves glucose metabolism and insulin tolerance. Besides to control obesity, sterculic acid was efficient for the treatment of pathologies such as atherosclerosis, liver disorders, cancer and neurodegenerative pathologies including Alzheimer’s, multiple sclerosis and Parkinson’s (Peláez R et al., Cells 2020, 9:140).

The Sterculia striata seeds, known as “chicha” nut in Brazil, are consumed by man and their oil was shown to contain about 4% of malvalic acid and 11% of sterculic acid (Aued-Pimentel S et al., J Chromatogr A 2004, 1054, 235). These levels may thus compromised the use of these nuts due to possible health implications caused by cyclopropenoid acid ingestion.
A review summarized the occurrence of cyclopropene acids in numerous plant families (Christie WW, in “Topics in Lipid chemistry”, vol 1, pp1-50, Logos Press Ltd 1970). This review may be completed with that of Vickery JR (JAOCS 1980, 57, 87).