This compound was first considered as a microbial growth factor but it was found not only in yeast but also in beef liver from which it was first isolated in pure form (Reed LJ et al., J Am Chem Soc 1953, 75, 1267). This isolation is one of the more spectacular achievements in the purification of natural products, since 30 mg of crystalline lipoic acid was obtained from 10 tons of liver. Lipoic acid was named also thioctic acid or 1,2-dithiolane-3-pentanoic acid. After its absorption, this acid is reduced enzymatically by NADH or DADPH to dihydrolipoic acid (or 6,8-dithiane octanoic acid) in various tissues. A fraction of the total lipoic acid pool is covalently bound to   enzyme molecules through an amide linkage with a lysine residue. 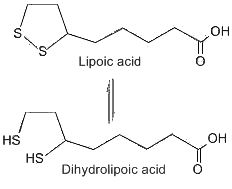 First shown necessary for bacteria, lipoic acid was demonstrated to be a coenzyme in the glycine cleavage system and in the dehydrogenase complex. Now, lipoic acid is considered as an efficient antioxidant since with its reduced form it constitutes a redox couple via modulation of NADH/NAD ratio. Consequently, lipoic acid has gained a special interest as a therapeutic agent (Packer L et al., Free Radic Biol Med 1997, 22, 359). It can scavenge hydroxyl and peroxyl radicals but also chelates transition metals (Fe, Cu…). Packer L. considered that lipoic acid is perhaps the most powerful of all the antioxidants, it may offer an efficient protection against many heart diseases, it is currently used  to relieve  the complications of diabetes (Packer L et al. The antioxidant miracle. John Wiley & Sons 1999).