Since different fatty acids may be linked to a long-chain base (most frequently sphingosine), a great number of molecular species are found in natural extracts. Not only the chain length (from 16 to 26 carbon atoms)  and the degree of unsaturation (without or with one double bond) of the fatty chain may present variations but fatty acid species with odd numbers of carbon and with one hydroxyl group may be also encountered.
To simplify the chromatographic separation of glycosphingolipid species a prior isolation of non-hydroxylated and hydroxylated species by TLC is highly recommended.
Whereas molecular species may be separated in the native form, a previous derivatization afford better chromatographic resolutions. As for the separation of glycosphingolipid groups, perbenzoylation combined with reverse-phase HPLC is the most largely adopted method to analyze molecular species.

Sphingolipids are isolated by TLC as previously described and each sub-class is subjected to benzoylation with benzoyl chloride. Samples are dissolved in a small volume  of cyclohexane for injection.
A column containing a reverse-phase support (Spherisorb ODS or equivalent) (4 x 250 mm) is eluted in an isocratic mode with acetonitrile/methanol mixtures, 30/70 (v/v) for the separation of non-hydroxy cerebrosides and 20/80 (v/v) for hydroxy cerebrosides. The final mixture must be optimized with each column brand. The effluent is monitored at 230 nm (Yahara S et al. J Neurochem 1980, 34, 694).

Below is shown the chromatogram of non-hydroxycerebroside molecular species from peripheral nerves. The eluting solvent is methanol/acetonitrile (30/70, v/v) and the flow rate is 1 ml/min. 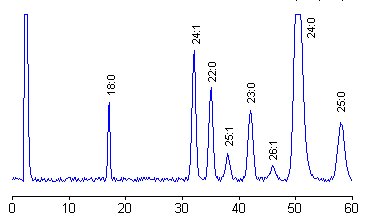 The peaks are identified according to the fatty acid present. Each collected peak may be methanolyzed for further identification by GLC. The esters of hydroxy-fatty acids are methylated and converted to trimethylsilyl ethers before analyzis by GLC. The long-chain base has no influence on the retention time, the presence of sphingosine and dihydrosphingosine being generally detected in each peak. Analysis of long-chain bases in collected fractions may be done as previously described. When hydroxy-fatty acids are present the elution time of a particular molecular species is slightly shorter than for the corresponding compound with a normal fatty acid.
More information may be found in: McCluer RH et al. (Meth Enzymol 1989, 172, 538)