The evaporative light detection system has revolutionized the analysis of lipids by HPLC since its introduction around 1980. This type of detector works by measuring the light scattered from the solid solute particles remaining after nebulization and evaporation of the mobile phase. For native lipids (not derivatized), the light-scattering detector (ELSD) is far more useful for on-line lipid quantification than the commonly used UV detector.
More recently, an alternative instrument derived from the light scattering detector was proposed (Corona® CAD®instrument). This new detection device, charged aerosol detector, is based on an unique technology, in which the HPLC column eluent is first nebulized with nitrogen and the droplets are dried to remove mobile phase, producing analyte particles. Then, a secondary stream of nitrogen becomes positively charged as it passes a high-voltage, platinum corona wire. This charge transfers to the opposing stream of analyte particles. The charge is transferred to a collector where it is measured by a highly sensitive electrometer, generating a signal in direct proportion to the quantity of analyte present. This device shows consistent inter-analyte response independent of chemical structure. This means that the Corona detector can be used routinely for quantitation. This technology is said to be superior to light scattering for quantitative measurements.

An updated bibliography of papers relevant to various applications of light-scattering detection to the analysis of lipids is given below :

PRINCIPLE OF THE LIGHT-SCATTERING DETECTOR

This type of detector can be used for all solutes having a lower volatility than the mobile phase. Semi-volatile solutes can be detected due to the relatively low temperatures at which new generations of instruments can operate. For the majority of non-volatile solutes, the detection limits reach frequently the nanogram range per injection.
In the ELSD, the mobile phase enters the detector, is evaporated in a heated device and the remaining solute is finally detected by the way it scatters light. The intensity of the light scattered from solid suspended particles depends on their particle size. Therefore, the response is dependent on the solute particle size produced. This, in turn, depends on the size of droplets generated by the nebulizer and the concentration of solute in the droplets. The droplet size produced in the instrument nebulizer depends on the physical properties of the liquid and the relative velocity and flow-rates of the gas and liquid stream. The importance of all these parameters emphasizes the need for careful design and rigorous optimization of the instrument parts.

Three important steps can be defined during the working of the instrument, steps which are located in three different parts of the detector: the nebulizer, the evaporation chamber and the detection system (Figure).

1- Nebulization of the effluent

This first step transforms the whole liquid phase flowing from the HPLC column into fine droplets. The larger the droplet size, the higher the temperature needed to evaporate the liquid phase. The bigger the residual solute particles, the more intense the scattered light will be.
In general, the nebulization part incorporates a Venturi-type flow of gas around the eluent inflow. Each brand has its own design, but similar to that found in atomic absorption spectrometer where fine dispersion are needed. In some instruments, the nebulization chamber has a special shape and is used to eliminate the biggest droplets of solvent, thus removing the water part of the sample droplets, in others all the column effluent passes into the next part (evaporation zone).

2- Evaporation of the effluent

This second step begins when the droplets are carried by the gas flow into the heated area located before the detection chamber. Each brand has its own design for this zone and the efficiency of the required evaporation depends on the shape of the tube and the needed temperature. The solvent is completely removed to produce particles of solutes without solvation or even droplets of pure solutes. Practically, a temperature in the range 40-60°C is sufficient to evaporate solvents used in HPLC of lipids where high percentages of water or polar solvents are frequently used.

The sample particles pass through a flow cell where they are hit with an incident light beam, the amount of light scattered being measured using a photomultiplier and an electronic device. In some instrument a secondary gas inlet is used to concentrate the particles in the center of the detection chamber.

CHARACTERISTIC PROPERTIES OF THE DETECTOR

The solvent quality is of prime importance to get the lowest background signal. Don’t forget that the detector sensitivity is related to the ratio signal/noise. Don’t choose a solvent for ELSD as for UV or fluorescence detection. The residue after evaporation is the most important criteria and this quality must be always lower than 1 mg/l. We daily observed that HPLC-grade solvents have this specification. Solvents used or solvent mixtures must be filtered through compatible sub-micron filters (0.4 or 0.2 µm). If possible samples must also be filtered with special filters before injection. When possible, the use of solvents “for residue analysis” is recommended, they are known to contain less than 5 mg impurities per liter.
To differentiate the noise from the solvent and that of the instrument, switch off the pump: you will observe a signal shift for the contribution of the solvent.

A common way to modify the pH value of the final solvent mixture is to add solvent modifiers. Remember that additives containing metal cations cannot be used without compromising the ELSD sensitivity. It is possible to use volatile acids, bases and salts but trials are needed to choose the most efficient modifier for the separation. Use the lowest modifier concentration compatible with reliable results. To acidify, use of formic, acetic, trifluoroacetic and nitric acids are possible. To basify, use ammonia, triethylamine and pyridine. To increase ionic strength, it is possible to add ammonium bicarbonate or acetate, if necessary in combination with the above-mentioned acids or bases. Practically, we use no more than 0.1 ml acidic or basic modifier per liter of solvent.

The response of the ELSD to various lipid species was shown to be enhanced by the addition of 0.1% (v/v) triethylamine and an equimolar amount of formic acid in the mobile phase (Deschamps FS et al., Chromatographia 2001, 54, 607). This response modifier enhanced the detection response of lipids by 2 up to 50 times without altering retention except with zwitterionic phospholipids which had a better peak shape. It was further demonstrated that the response enhancement was more marked at low flow rate and was dependent on solutes and solvents (Deschamps FS et al., Analyst 2002, 127, 35). The analysis of all parameters led to the conclusion that the chosen modifiers mainly act as amplifier by the inclusion of triethylamine-formic acid clusters inside the droplets. A similar effect of these modifiers was observed when they are added at the outlet of columns eluted with supercritical CO2 (Lesellier E et al., J Chromatogr A 2003, 1016, 111).

Nitrogen is sometimes preferred for safety reasons but clear compressed air is most frequently used. In all cases, the instrument exhaust must be connected to a fume hood. If the air compressor is oil-lubricated, a charcoal column followed by a sub-micron particle filter must be inserted in the air line before entering the ELSD. Furthermore, we have inserted after the charcoal column a dessicator-containing column to decrease the hygrometry of the delivered air.

To ensure accuracy and precision in the analysis of lipid components with the ELSD, as with other detectors, a calibration against well-defined lipid standards is necessary.
It remains possible to include in the sample a defined and well separated compound as an internal standard. As an example, cholesterol was used for phospholipid quantification. This approach allows the correction of detector drift in between day measurements but after calibration with a known standard mixture corresponding to the separated compounds.

Several instruments can be found on the market for light scattering or charged aerosol detection. All are constructed on a common basis but each one has a different design and specific features focusing on various analytical aspects.

– Among the available instruments based on light scattering detection, the analyst may look at several companies:

In the CHROMACHEM instrument, the heated area is a coiled stainless steel tube which allows evaporation of pure water at up to 4 ml/min at 55°C. This important device was designed to allow the use of low temperatures in normal run conditions. 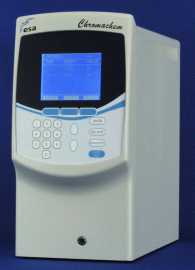 In the PL-ELS 1000 (Polymer Laboratories), new features are found including a high efficiency nebulizer design and low volume/low dispersion evaporation system (straight evaporation chamber). The instrument is said  to have baseline stability and very good reproducibility and sensitivity.

Other efficient device may be found in various suppliers : Shimadzu, Alltech, Sedere,  …

– Charged aerosol detection may be effected with the CoronaTM instrument from Dionex. An overview of that technology and its advantages may be found, Download an application note describing the Corona CAD’s sensitivity, dynamic range, response from compounds of different structures including lipids, and the instrument’s reproducibility characteristics.