These compounds contain most frequently one or two sugars linked glycosidically to glycerol or diacylglycerol. Glycolipids with three or four sugars are also known. They are especially important in higher plants, algae and bacteria where they are located in photosynthetic membranes, they are also found in animals but in lesser amounts.

Photosynthetic membranes of all oxygenic photosynthetic organisms are constituted of about 85 % of neutral glycoglycerolipids (MGDG and DGDG) (Murata et al., Biochim Biophys Acta 1990, 1019, 261). Therefore, based on the natural abundance of photosynthetic organisms, these glycolipids constitute the most profuse lipid class on Earth (Gounaris K et al., Trends Biochem Sci 1983,  8, 378). The discovery of a plastid in Plasmodium falciparum, the causative agent of malaria, without galactoglycerolipids raised the question of the loss of galactoglycerolipids during evolution (Botté CY et al., Trends Plant Sci 2014, 19, 71).

Galactosyl monoacylglycerol with various numbers of galactose moiety has also been described in several plants.

Neutral glycoglycerolipids may be separated into two families :

Glycoglycerolipids were unknown until 1956, when Carter HE et al. reported the presence of these lipids in lipid extracts of wheat flour (J Amer Chem Soc 1956, 78, 3735). Their specific association with photosynthetic tissues (tylakoid membranes of chloroplasts) was known from 1958 (Benson AA et al., J Am Chem Soc 1958, 80, 4740) but their correct structure was elucidated in 1961 (Carter HE et al., J Lipid Res 1961, 2, 215 and 223). This tight assocIation is exemplified by the herbicide or algaecide activity of a monogalactosyldiacylglycerol synthase inhibitor (Galvestine) (Bonneau AL et al., Patent EU 07290684.5).

R1 and R2 are the two fatty chains

Higher homologues of galactolipids (tri- and tetragalactosyl diacylglycerols) were later identified in all plant tissues. A new glyceroglycolipid whose structure was elucidated to be trigalactosyl monolinolenylglycerol has been isolated from a Chinese folk medicine Premna microphylla (Zhan ZJ et al., Lipids 2003, 38, 1299).

In the alga Chlorella, galactolipids are four times more abundant than phospholipids. They are also much more abundant in the plant kingdom than triacylglycerols. Based on their high proportion in chloroplastic membranes and the abundance of plants and algae on Earth, it was estimated that they represent the most abundant acyl lipid class in Nature and the main stock of fatty acids, including a large proportion of α-linolenic acid (Gounaris K et al., Trends Biochem Sci 1983, 8, 378).

Both MGDG and DGDG contain large amounts of linolenic acid (18:3n-3) and a specific trienoic acid (16:3 n-3). In higher plants, linolenic acid is almost the only fatty acid in MGDG, this composition led to name these plants “18:3 plants”. In angiosperms, linolenic acid is concentrated in both sn-1 and -2 positions of both MGDG and DGDG and 16:3 n-3 is absent. By contrast, lower plants (green algae, mosses, ferns, conifers) and some angiosperms (Solanaceae, Brassicaceae, Chenopodiaceae) have 16:3 n-3 concentrated in the sn-2 position of galactolipids, while the low proportion of 18:3 n-3 is acylated in both positions. Such plants are called “16:3 plants” and have a “prokaryotic” structure similar to that observed in cyanobacteria. In red algae and photosynthetic diatoms, galactolipids are characterized by a high proportion of 20:5 n-3. Several n-3 fatty acids have been determined in MGDG isolated from the brown alga Sargassum thunbergii (Kim Y H et al., Lipids 2007, 42, 395). Combinations of 18:3/20:5, 18:3/18:4, 18:4/20:5 and 18:3/18:3 were described. It has been shown that MDA oxidatively generated from fatty acids in Arabidopsis may be recycled back into chloroplast 18:3-16:3-MGDG that may be again fragmented into MDA (Schmid-Siegert E et al., J Biol Chem 2016, 291, 13005).

Galactolipids have been found in only low amounts in most fungi, the main glycolipids being glycosphingolipids. Another unusual fatty acid (18:3 n-1) was described to be abundant (about 25 %) in MGDG from marine diatom Skeletonema costatum (d’Ippolito G et al., Biochim Biophys Acta 2004, 1686, 100). These two fatty acids were shown to be metabolized into short-chain aldehydes, octadienal (8:2 n-4) and octatrienal (8:3 n-1), which may have deleterious effects on zooplankton crustaceans. A third aldehyde, heptadienal (7:2 n-3), was also shown to be produced from MGDG eicosapentaenoic acid.
A monogalactosyl diacylglycerol containing two linolenic acid (18:3 n-3) acyl groups has been described in fruits of rose hips (Rosa canina) and was shown to be an anti-inflammatory agent (inhibition of cell migration). This may be directly related to the clinically observed anti-arthritis properties of rose hip herbal remedies (Larsen E et al., J Nat Prod 2003, 66, 994).  Other studies reported that galactosyl diglycerides from various sources have antitumor-promoting (Shirahashi H et al., Chem Pharm Bull 1996, 44, 1404), oxygen scavenging (Nakata K , J Biochem 2000, 127, 731), and virus neutralizing (Nakata K et al., J Biochem 2000, 127, 191) activities.

More recently, DGDG synthesized or isolated from Clinacanthus leaves from Thailand exhibited anti-herpes simplex virus activity (Janwitayanuchit W et al., Phytochemistry 2003, 64, 1253). MGDG extracted from the invasive brown alga Sargassum muticum was shown to exhibit anti-microfouling activity (inhibition of the growth of bacteria and fungi), thus protecting any surface immersed in sea water (Plouguerné E et al., Mar Biotechnol 2010, 12, 52). There is evidence that specific galactolipids containing 16:3n-3 or 18:4n-3 in the sn-1 position and 20:5n-3 or 18:5n-3 in the sn-2 position may be directly involved in cytotoxic reactions induced by marine diatoms (Phaeodactylum tricornutum) (Andrianasolo EH et al., J Nat Prod 2008, 71, 1197). This is the first report of an apoptosis induction by galactolipids.
A new MGDG containing 14:0 and 18:5n-3 has been isolated from the marine dinoflagellate Karenia mikimotoi (Leutou AS et al., Mar. Drugs 2020, 138). These glycolipids have been shown to be hemolytic and ichthyotoxic.
It has been discovered that the chloroplasts of Arabidopsis contained a particular MGDG named arabidopside characterized by the presence of 12-oxo-phytodienoic  acid (Stelmach BA et al., J Biol Chem 2001, 276, 12832). This compound, a phytohormone closely related to jasmonic acid, is acylated on the sn-1 carbon of glycerol, the 16:3 n-3 being acylated in position sn-2. Later, other arabidopside species have been isolated with a glycerol acylated by two jasmonate compounds. It must  be noticed that these glycolipids, considered as a kind of hormonal storage, seem to characterize only Brassicaceae. Curiously, the jasmonates remain in a free state in the chloroplasts of many other plants. MGDG containing 12/10-carbon oxoacids have been detected in disrupted leaves of Arabidopsis and have been related to the production of six-carbon aldehydes, alcohols and their esters which are known as leaf volatiles (Nakashima A et al., J Biol Chem 2013, 288, 26078).

Several glycoglycerolipids have been screened to have significant anti-tumor activities towards different targets, results and structure-activity relationships may be found in an important review (Zhang J. et al., Mar Drugs 2014, 12, 3634).

A novel family of oxylipin-containing MGDG, named linolipins, has been discovered in the flax (Linum usitatissimum) leaves (Chechetkin et al., FEBS J 2009, 276, 4463). First members of this family were identified as MGDG species possessing one or two esterified residues of divinyl ether (ω5Z)-etherolenic acid. Similar oxylipin-containing DGDG have been isolated from the leaves of flax plants inoculated with phytopathogenic bacteria or damaged by freezing-thawing (Chechetkin IR et al., Phytochemistry 2013, 96, 110).

It has been established that the glycolipids contained in flour act as surfactants and that they positively affect the volume, texture, and staling of bread. Therefore, this group of polar lipids can be regarded as a very interesting  surfactant group for bread making. Monoalactosylglyceride and its lyso derivative were shown to be the most efficient compounds in improving the baking performance of wheat flour (Selmair PL et al., J Agric Food Chem 2008, 56, 6691). A review of the role of glycolipids in breadmaking may be consulted (Selmair PL et al., Lipid Technol 2010, 22, 7).

A review of the physiological contribution of galactolipid digestion in various species has been published (Sahaka M et al., Food and Function 2020, July)). It overlooked aspect of lipid digestion which ensures not only the intake of linolenic acid from its main natural source, but also the main lipid source of energy for growth of some herbivorous species.

An original glycoglycerolipid (2-Acetoxy-1-(3-glycosyloxyoctadecanoyl)glycerol) has been isolated from the exudates from glandular trichome-like secretory organs of Cerasu yedoensis, a commonly cultivated species of cherry tree in Japan (Asai T et al., Phytochem Lett 2011, 4, 38). The disaccharide moiety is linked to a 3-hydroxyoctadecanoic acid which esterifies glycerol in sn-1, the position sn-2 being acylated. 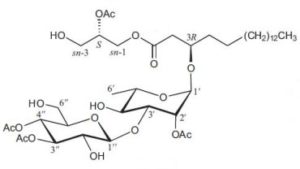 An intermediate form of monoglycosyldiacylglycerol, cramerides, was isolated as a mixture of parent molecules from the sponge Pseudoceratina crassa (Costantino V et al., J Org Chem 1993, 58, 186). These compounds have a unusual cyclitol moiety, a branched alkyl chain and a saturated acyl chain with 14-16 carbon atoms, branched or not. One form is shown  below.

These compounds were shown to have antifeedant activity in fish, thus suggesting a role of feeding deterrents.

Many diether lipids from bacterial in origin which contained glycosidic headgroups were detected in carbonate chimney in a hydrothermal field (Bradley AS et al., Org Geochem 2009, 40, 1169). These compounds represent an unprecedented combination of archaeal characteristics in bacterial lipids since these lipids have a structure of glycosidic non-isoprenoid diethers. 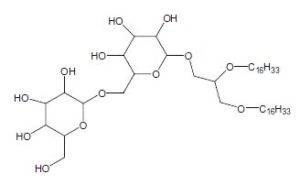 The polar head group can be a mono or a diglycosyl moiety and the alkyl chains with 14-18 carbon atoms can be saturated, monounsaturated or monomethylated. The presence of these lipids is likely related to the very low level of phosphate in the vent environment. As these glycolipids were found in an environment analog to that which was present at the beginning of life on earth, it was speculated that glycolipids were an evolutionary predecessor to phospholipids.

In the course of studies on bioactive substances from marine organisms, the discovery of a novel glyceroglycolipid was recently reported (Aoki S et al., Tetrahedron 1999, 55, 14865). The chemical analysis revealed the presence of an O-alkyl ether chain (R = 16 carbon chain with or without a branched methyl group) at C1 of the glycerol, two moles of glucose at C2 and one mole of xylose at C3. These new lipids which have anti tumor properties were named Myrmekiosides (from the sponge Myrmekioderma sp).

An unique ether lipid characterized by the glycosylation (by xylose) of two alcohol radicals of glycerol and an O-alkenyl ether chain (24 carbon atoms and one double bond) at the third radical, was described in the Senegalese sponge Trikentrion loeve (Costantino V et al., Tetrahedron 1993, 49, 2711). 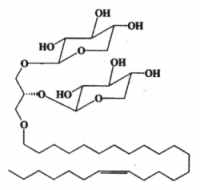 Another ether lipid, a plasmal conjugate to glycerol and psychosine, glyceroplasmalopsychosine, has been described in human brain.

Acylated forms of glycoglycerolipids were identified in extracts from a Cyanobacterium, Synechocystis sp (Kim YH et al., Lipids 1999, 34, 847). Their structural elucidation has shown that two forms were present, a palmitoyl group being esterified to the hydroxyl group at the C-6 position of the terminal glycosyl moiety of either digalactosyl monoacylglycerol (acylated DGMG) or digalactosyl diacylglycerol (acylated DGDG). The presence of acylated DGDG, MGDG and even monogalactosyl monoacylglycerol (MGMG) was reported from leaf homogenates (Heinz E et al., Hoppe-Seyler’s Z Physiol Chem 1969, 350, 493 and 1974, 355, 612) and nitrogen-fixing cyanobacteria (Murakami N et al., Chem Pharm Bull 1993, 41, 1177).

An unusual glucosamidyl glycolipids has been described in an extreme thermoacidophile Bacillus acidocaldarius (Langworthy TA et al., Biochim Biophys Acta 1976, 431, 550). This major compound, which comprises about 64% of the total lipids, appears to be a fatty N-acyl derivative of : Glucopyranosyl(1->4)Glucosamine(1->3-diacylglycerol. The amide-linked fatty acid was primarily branched heptadecanoic, but also 11-cyclohexylundecanoic or 13-cyclohexyltridecanoic acid. In bacteria and algae a large number of glycolipids containing different sugar combinations have been reported.

These new glycolipids were isolated from a strain of the Mycobacterium avium-M. intracellulare complex (Watanabe M et al., J Bacteriol 1999, 181, 2293). These compounds were characterized by an arabinofuranosyl glycerol acylated on the carbon 5 of the arabinose moiety by one of various forms of mycolic acids (mycolic, keto mycolic, wax-ester mycolic). One form is shown below.

A novel galactosylalkylglycerol modified with a long-chain cyclic acetal at the sugar moiety was isolated from equine brain and named plasmalogalactosylalkylglycerol (Yachida Y et al., J Lipid Res 1999, 40, 2271). The chain lengths of alkyl and acetal groups were C14 for the former and C16 and C18 for the latter. The acetal group appears thus similar to that found in plasmalogalactosyl ceramide previously isolated from equine brain. The whole equine brain contains about 5 mg of this new glycoglycerolipid.