Although the dicarboxylic acids do not occur in appreciable amounts as components of animal or vegetal lipids, they are in general important metabolic products of fatty acids since they originate from them by oxidation. Dicarboxylic acids are suitable substrates for preparation of organic acids for the pharmaceutical and food industries. Furthermore, they are useful materials for the preparation of fragrances, polyamides, adhesives, lubricants, and polyesters.

They have the general type formula:

In vegetal, a great variety of molecular forms of dicarboxylic acids are found :

2- complex forms with a dicarboxylic acid and an alkyl side chain : alkylitaconates

Short-chain dicarboxylic acids are of great importance in the general metabolism and up to n=3 they cannot be considered as lipids since their water solubility is important. The simplest of these intermediates is oxalic acid (n=0), the others are malonic (n=1), succinic (n=2) and glutaric (n=3) acids.

The other lipid members of the group found in natural products or from synthesis have a “n” value from 4 up to 21.

Suberic acid, nonanedioic acid (and its mono-unsaturated derivative: 2-nonenedioic acid), decanoic acid (and its mono-unsaturated derivative: 2-decenedioic acid) are present in honey (Schievano et al., J Agric Food Chem 2013, 61, 1747) and are of special interest because they have long been recognized as part of the pheromone system of the honeybee Apis mellifera (Lercker G et al., Lipids 1981, 16, 912). They are produced in the mandibular glands of the queen and the worker honeybees, they regulate their activities in the hive.

It was shown that all these dicarboxylic acids are formed during the drying process of paint oils and that the determination of these decomposition products may be of value in determining the age of old samples.

Among them, Thapsic acid (n=14) was isolated from the dried roots of the Mediterranean “deadly carrot”, Thapsia garganica (Umbelliferae), but others, as Brassylic acid (n=11), were prepared chemically from different sources. Brassylic acid can be produced chemically from erucic acid by ozonolysis but also by microorganisms (Candida sp) from tridecane. This diacid is produced on a small commercial scale in Japan for the manufacture of fragrances.
A review on the applications and the industrial biotechnology of these molecules has been released by Kroha K (Inform 2004, 15, 568).

A large survey of the dicarboxylic acids present in Mediterranean nuts revealed unusual components (Dembitsky VM et al., Food Chem 2002, 76, 469). A total of 26 minor acids (from 2 in pecan to 8% in peanut) were determined : 8 species derived from butanedioic acid, likely in relation with photosynthesis, and 18 species with a chain from 5 to 22 carbon atoms.

It was shown that hyperthermophilic microorganisms specifically contained a large variety of dicarboxylic acids (Carballeira NM et al., J Bacteriol 1997, 179, 2766). This is probably the most important difference between these microorganisms and other marine bacteria. Dioic fatty acids from C16 to C22 were found in an hyperthermophilic archaeon, Pyrococcus furiosus. Short and medium chain (up to 11 carbon atoms) dioic acids have been discovered in Cyanobacteria of the genus Aphanizomenon (Dembitsky VM et al., Biochemistry (Moscow) 2001, 66, 72).

While polyunsaturated fatty acids are unusual in plant cuticles, a diunsaturated dicarboxylic acid has been reported as a component of the surface waxes or polyesters of some plant species. Thus, octadeca-c6,c9-diene-1,18-dioate, a derivative of linoleic acid, is present in Arabidopsis and Brassica napus cuticle (Bonaventure G et al., Plant J 2004, 40, 920).

Dicarboxylic acids were shown in 1934 to be produced by ω-oxidation of fatty acids during their catabolism (Verkade PE et al., Biochem J 1934, 28, 31). Thus, these authors have discovered that these compounds appeared in urine after administration of tricaprin and triundecylin. Although the significance of their biosynthesis remains poorly understood, it was demonstrated that ω-oxidation occurs in rat liver but at a low rate, needs oxygen, NADPH and cytochrome P450. It was later shown that this reaction is more important in starving or diabetic animals where 15% of palmitic acid is subjected to w-oxidation and then to β-oxidation (Wada F et al. Biochim Biophys Acta 1977, 487, 261), this generates malonyl-coA which is further used in saturated fatty acid synthesis.

Bempedoic acid, a tetramethylated and hydroxylated dicarboxylic acid (a 15 carbon chain) is a drug under development (Esperion Therapeutics) for the treatment of hypercholesterolemia (Ray KK et al., N Engl J Med 2019, 380, 1022). This new drug inhibits ATP citrate lyase, which is involved in the liver’s biosynthesis of cholesterol upstream of HMG-CoA reductase, the enzyme that is blocked by statins (Brandts J et al., Drugs 2020, 29, 763).
It has been shown that bempedoic acid provided additional LDL-C lowering in patients who did not achieve an adequate response to lipid-lowering therapy when compared with placebo (Goldberg AC et al., JAMA 2019, 322, 1780). On January 2020, the European Committee for Medicinal Products for Human Use has adopted a positive opinion, recommending the granting of a marketing authorisation for bempedoic acid under the name Nilemdo, for the treatment of adults with primary hypercholesterolaemia or mixed dyslipidaemia. Reports have been published about the usefulness of that compound in the prevention of cardiovascular diseases (Warden BA et al., J Clin Lipidol 2022, 16, 94).

Long-chain dicarboxylic acids containing vicinal dimethyl branching near the centre of the carbon chain have been discovered in the genus Butyrivibrio, bacteria which participate in the digestion of cellulose in the rumen (Klein RA et al., Biochem J 1979, 183, 691). These fatty acids, named diabolic acids, have a chain length depending on the fatty acid used in the culture medium. The most abundant diabolic acid in Butyrivibrio had a 32-carbon chain length.

These diacids were also detected in he core lipids of the genus Thermotoga of the order Thermotogales, bacteria living in solfatara springs, deep-sea marine hydrothermal systems and high-temperature marine and continental oil fields (Huber R et al., Arch Microbiol 1986, 144, 324). It was shown that about 10% of their lipid fraction were symmetrical C30 to C34 diabolic acids. The C30 (13,14-dimethyloctacosanedioic acid) and C32 (15,16-dimethyltriacontanedioic acid) diabolic acids have been described in Thermotoga maritima (Caballeira NM et al., J Bacteriol 1997, 179, 2766).
Some parent C29 to C32 diacids but with methyl groups on the carbons C-13 and C-16 have been isolated and characterized from the lipids of thermophilic anaerobic eubacterium Themanaerobacter ethanolicus (Jung S et al., J Lipid Res 1994, 35, 1057). The most abundant diacid was the C30 α,ω-13,16-dimethyloctacosanedioic acid.

Biphytanic diacids are present in geological sediments and are considered as tracers of past anaerobic oxidation of methane (Birgel D et al., Org Geochem 2008, 39, 152). Several forms without or with one or two pentacyclic rings have been detected in Cenozoic seep limestones. These lipids may be unrecognized metabolites from Archaea. 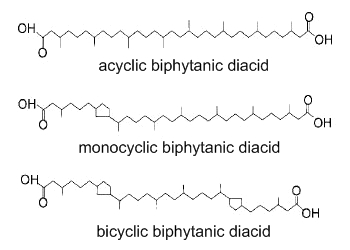 Crocetin is the core compound of crocins (crocetin glycosides) which are the main red pigments of the stigmas of saffron (Crocus sativus) and the fruits of gardenia (Gardenia jasminoides). Crocetin is a 20-carbon chain dicarboxylic acid which is a diterpenenoid and can be considered as a carotenoid. It was the first plant carotenoid to be recognized as early as 1818 while the history of saffron cultivation reaches back more than 3,000 years.

The major active ingredient of saffron is the yellow pigment crocin 2 (three other derivatives with different glycosylations are known) containing a gentiobiose (disaccharide) group at each end of the molecule.

A simple and speccific HPLC-UV method has been developed to quantify the five major biologically active ingredients of saffron, namely the four crocins and crocetin (Li N et al., J Chromatogr A 1999, 849, 349).

Several dicarboxylic acids having an alkyl side chain and an itaconate core have been isolated from lichens and fungi, itaconic acid (methylenesuccinic acid) being a metabolite produced by filamentous fungi.

Among these compounds, several analogues, called chaetomellic acids with different chain lengths and degrees of unsaturation have been isolated from various species of the lichen Chaetomella (two of them are shown below).

These molecules were shown to be valuable as basis for the development of anticancer drugs due to their strong farnesyltransferase inhibitory effects (Singh SB et al., Bioorg Med Chem 2000, 8, 571).

It was determined that these ceriporic acids suppressed iron redox reactions to attenuate •OH production by the Fenton reaction in the presence of iron reductants such as hydroquinone and cysteine (Enoki M et al., Chem Phys Lipids 2002, 120, 9). It was proposed that the suppression of the cellulolytic active oxygen species, •OH, by this metabolite contributes to the selective lignin-degradation with a minimum loss of cellulose. The absolute configuration of ceriporic acids, their stereoselective biosynthetic pathway and the diversity of their metabolites have been largely discussed (Nishimura H et al., Chem Phys Lipids 2009, 159, 77).

Dicarboxylic acids derive classically from medium and long-chain monocarboxylic fatty acids by an oxidation mechanism named w-oxidation which is followed in the cell by a b-oxidation. This w-oxidation is of minor significance in the normal cell physiology but the production of dicarboxylic acids may be increased by other mechanisms in particular situations of reaction-induced lipid peroxidation. It was shown that dicarboxylic acids may be the end products of oxidative attack on both free and esterified unsaturated fatty acids. The species formed are thus a distinctive feature of the positions of the double bonds in the intact fatty acid molecule. A novel cytotoxic phospholipid, 2-azelaoyl phospholipid, was thus described when phosphatidylcholines are peroxidized in vitro (Itabe H et al., Biochim Biophys Acta 1988, 962, 8).

The exact mechanism of dicarboxylic acid acid formation is not completely known but several experiments suggest that a single unsaturated fatty acid gives two types of dicarboxylic acids: a primaryone related to the double bond nearest to the acid function and a secondary two carbon atoms lower homologue.

To illustrate the mechanism, the next figures represent the main steps of the   oxidative attack of oleic acid (18:1 n-9) which will form azelaidic and pimelic acids.

First, oleic acid generates a peroxy radical at the carbon 9 and then may undergo a direct degradation to azelaic acid via the successive formation of peroxy, hydroperoxy and alkoxy radicals also at C9. The scission  of the carbon chain at C9 will give an aldehyde-acid (azelaic hemialdehyde) and then a diacid (azelaidic acid). 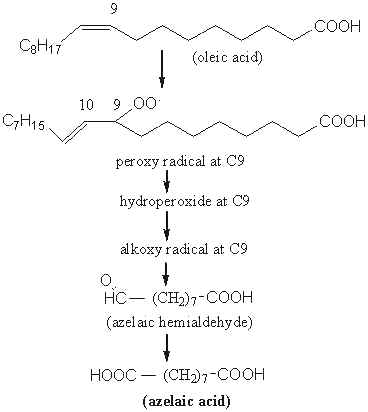 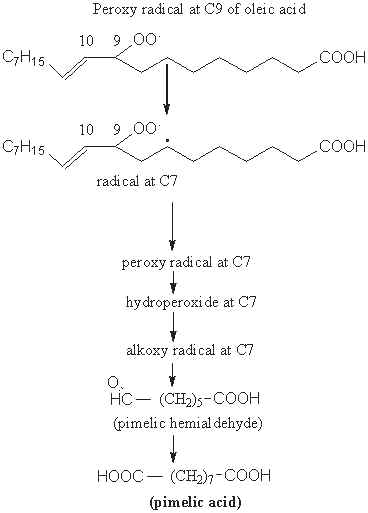 It was demonstrated that all free or esterified unsaturated fatty acids (mono- or polyunsaturated) under chemical, physical or biological oxidation generate dicarboxylic acids, their chain length depending on the position of the first double bond (Passi S et al., Biochim Biophys Acta 1993, 1168, 190).

It was shown that dicarboxylic acids may be use as markers of fatty acid peroxidation. Thus, in diabetes, where an imbalance between the generation of free radicals and antioxidant defense systems increases  oxidative stress, the dicarboxylic acid excretion is increased in urine. It was shown that the urinary excretion increased by 5.5 and 7.5 times for adipic acid (C6) and suberic acid (C8), respectively (Inouye et al., Atherosclerosis 2000, 148, 197).