Accumulation of triglycerides may also occur in certain yeasts and moulds. Thus, up to 86% lipid has been recorded in the mould, Mortierella isabellina. The analysis of the distribution of the fatty acyl groups in triglycerides from numerous yeasts and mould indicates that these microbial lipids are similar to their plant counterparts mainly in locating the unsaturated chains at the sn-2 position.

In most plants storage lipids are in the form of triglycerides (Murphy DJ, Prog Lipid Res 1990, 29, 299). There are a very few examples of alternative forms of storage lipid in higher plants. The most known of these is the desert shrub, jojoba, which stores its seed lipid as a liquid wax. Storage lipids may be accumulated in one or both of the main types of seed tissue, embryo or endosperm. In oilseeds such as sunflower, linseed or rapeseed, the cotyledons of the embryo are the major sites of lipid accumulation. In species such as castor bean, coriander or carrot, the endosperm is the main site of lipid accumulation. Finally, in tobacco, both embryo and endosperm tissues store lipids.

Vegetal oils are frequently classified in  two main groups, according to their source: pulp oil (palm, olive, avocado) and seed oil (other sources). The amount of lipids in plant parts varies from as low as 0.1% in potatoes to about 70% in pecan nuts. Some vegetal products are fat poor (1% in lentils, 3% in mushrooms), some seeds have a middle range amount (about 10% in wheat germ, 20%  in soybeans) while some are very oily (44% in peanuts, 55% in almonds, 65% in walnuts).
Plants store their energy production  first as carbohydrates, but during ripening they transform these oxygen containing compounds in carbon-rich triglycerides. Thus, a minimum of volume is required to stock a maximum of energy content. Conversely, the triglyceride stock is reconverted into carbohydrates during germination along with an incorporation  of high amount of water. One gram of oil is converted into 2.7 g of carbohydrates.

Global oilseed production had reached a record 319 million metric tons in 2001. Part of the total production of each oilseed is used directly as food, but most is crushed to extract oil. In average, all the seeds crushed gave oil in about 26% yield (min. cottonseed 15%, max. coprah 62%). The global vegetable oil consumption has more than doubled between 1980 and 2000, reaching about 76 million tons.

The following picture shows the gross fatty acid composition of the most important vegetal (seed) oils for human or animal consumption. 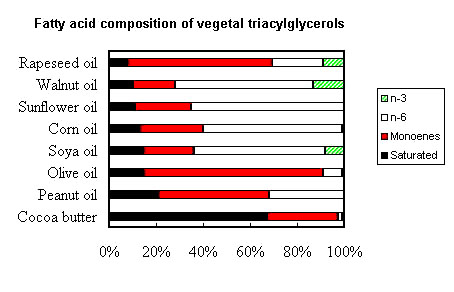 It can be seen that cocoa butter (as coconut oil or hydrogenated palm oil) is rich in saturated fatty acids and poor in essential fatty acids (n-6 and n-3). A number of plant families have seed fats characterized by low amounts of palmitic, oleic and linoleic acids. These acids have been replaced by lauric (12:0) and myristic (14:0) acids, as well as capric (10:0) and caprylic (8:0) acids. Among Lauracaea, Laurus nobilis fat contains about 58% lauric acid, while among Lythracaea, Cuphea salvadorensis contains about 65% myristic acid, C. calophylla 85% lauric acid, C. koehneana 92% capric acid, and C. pulcherrina 94% caprylic acid (Isbell TA et al., Inform 2003, 14, 513).

Rapeseed oil (or colza oil from Brassica sp) was originally available as a high-erucic oil (almost 50% of 22:1n-9) used mainly in the oleochemical industry. Several studies in animal models have shown that erucic acid may have detrimental effects on cardiovascular physiology, therefore, a low erucic acid oil is now produced and can be used safely in the food industry.

The seed oils of watercress (Nasturtium) and Honesty (Lunaria annua) have relatively high proportions of  C22:1 (38-48%) and C24:1(22-25%) fatty acids in their triglyceride molecules, these peculiarities make them potentially suitable for production of high-temperature lubricants and engineering nylons. The seeds of Crambe abyssinica (Cruciferae), a cabbage-like annual herb cultivated in Northern Europe, contain an oil high in erucic acid (about 56%).  The seed oil of meadowfoam (Limnanthes alba) contains triglycerides with over 98% fatty acids over 20 carbon atoms. Among them, are found 20:1 n-15 (about 60%), 22:1 n-17 (about 4%) and cis 5, 13 -22:2 (about 17%). Furthermore, this oil is liquid at room temperature even though it is of high molecular weight, it is one of the most stable lipids known, and it is highly resistant to oxidation. Meadowfoam oil has many potential applications in cosmetics, lubricants, waxes, polymers, surfactants, water repellents, and in textile and leather manufacturing.

The melting points of triacylglycerols are one of the significant physical properties used to characterize oils (and fats) and which are taken into account to design mixtures or products in which oils (and fats) are included. The melting point of any triacylglycerol species depends on the fatty acid composition of that species. For the measurement of the melting of a certain molecular species, its sample in a high state of purity is indispensable. Though excessive and tedious procedures are needed for the preparation of highly purified tag samples, the melting points of many molecular species of tag have been measured (Iwahashi M et al.: Basic Physical Properties of Oleaginous Chemicals. In: The handbook of Oil Chemistry, 4th Edn. Japan Oil Chemists’ Society Maruzen, Tokyo (Japan) 2001, pp 200–202). As a large number of the natural molecular species remains uncharacterized, a mathematical technique for correlating the value of the melting point of a tag with the values of the melting points of the three fatty acids has been described (Maruzeni S, Eur J Lipid Sci Technol 2009, 111, 1240). A similar method of correlating the values of melting points of diacylglycerols with the values of the melting points of the two fatty acids has been described (Maruzeni S, Eur J Lipid Sci Technol 2010, 112, 259).
One of the main chemical properties of vegetable oils is that they have low saturated fatty acid content in the sn-2 position, even in oils with high saturated fatty acid content such as cocoa butter. In addition, the saturated fatty acid distribution at the sn-1 and sn-3 positions in most vegetable oils is not random, as originally proposed (Van der Wal RJ, J Am Oil Chem Soc 1960, 37, 18). For example, the oleic acid content is higher at the sn-1 than at the sn-3 position in cocoa butter triacylglycerols, but it is virtually the same in olive oil. Furthermore, stearic acid is predominantly found in the sn-3 position of sunflower and olive oil triacylglycerols. It was demonstrated that certain fatty acids can influence the distribution of other fatty acids within triacylglycerol molecules (Martinez-Force E et al., J Agric Food Chem 2009, 57, 1595). It must be noticed that the sn-2 position where is most frequently located a polyunsaturated acid appears to be the more stable position with respect to lipid oxidation at least in the case of triacylglycerols in which one polyunsaturated fatty acid occurs in combination with two saturated fatty acids (review in Wijesundera C et al., Lipid Technol 2008, 20, 199).

The composition and structure of natural vegetal oils may be modified by chemical or enzymatic processes known as interesterification or hydrogenation.

In some rare vegetals, phenolic triacylglycerols have been described. Thus, phenolic acid triglycerides were isolated in the bud excretion of Populus lasiocarpa, a tree native in China (Asakawa Y et al., Phytochemistry 1976, 15, 811). These lipids were identified as 1,3-di-p-coumaryl-2-acetyl-glycerol (see fig below). A similar compound with methylated coumaryl groups was also identified. Several other phenolic triglycerides have been isolated from lipophilic excretion of winter buds of many species of Populus : 1-p-coumaryl-3-caffeyl-2-acetyl glycerol, 1,3-di-caffeyl-2-acetyl glycerol (Asakawa Y et al., Phytochemistry 1977, 16, 1791). 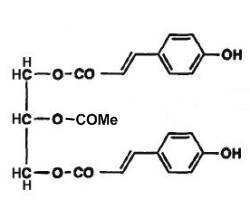 Several other phenolic triglycerides have been detected in propolis, a bee glue that honeybees collect from living plants, which is used, mixed with wax, in the construction of bee hive. Whereas the composition of propolis depends on the vegetal sources, specific structures have been determined in Russian (Popravko SA et al., Chim Prir Soed 1982, 2, 169) and European propolis (Bankova V et al., Z Naturforsch 2002, 57c, 530). Thus, dicoumaroyl acetyl glycerol, diferuloyl acetyl glycerol and feruloyl coumaroyl acetyl glycerol have been isolated in bud exudates of various Populus species. 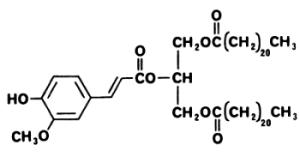 Ferulyl dioleine, which is a useful sunscreen ingredient, has been produced by lipase-catalyzed transesterification of ethyl ferulate with trioleine (Compton DL et al., JAOCS 2000, 77, 513).

Jojoba fruit (Simmondsia chinensis) contain an oily product which is not triglycerides but contain about 80% wax made up of long-chain alcohols (C20 to 24) and long-chain fatty acids (C18 to C22), each complex chain having one double bond.

A translation table of seed oils (6 languages) including the botanical sources may be found in a page of the AOCS Analytical Divisions.

An important database for seed oil fatty acids established by the Institute for Chemistry and Physics of Lipids in Mûnster is now electronically searchable : the Database SOFA.
This internet database allows to search for plant species, genera and families, for individual fatty acids (start by adding an asterisk after each entry) and combinations of fatty acids in their seed oils, and for their percentage contents. It contains literature references and numerous unpublished data. Moreover, fatty acid partial structures or functional groups can also be searched for, using the “delta-notation” system of chemists as described above. The use of the database is mostly straightforward and self-explanatory but several examples for search operations have been published to help anybody interested in seed oils and their fatty acid composition (Aitzetmüller K et al., Eur J Lipid Sci Technol 2003, 105, 92).

Since about 1990, genetically modified oils have been developed using either mutation/selection breeding or the tools of biotechnology and represent some of the most significant new products developed for the oils and fats industry . Many of these new oils possess fatty acid contents that are unique to the plant in which they have been developed. Thus, they convey different functional and/or nutritional characteristics compared to the classic or natural types. Genetically modified oils fall into two main categories. The first group has been designed to give products with enhanced oxidative stability. These oils are targeted mainly to salad dressing or frying applications and are best represented by the high oleate and low linolenate types. The second general group is characterized by oils with altered levels of saturated fatty acids. In the future, it may be expected that oils will be genetically created possessing novel fatty acyl substitutions, such as hydroxyl or epoxy groups, as well as alkyne or conjugated double bonds. These types represent potential alternatives to industrial oils derived currently from undomesticated species. An extensive review of genetically modified oils and the utilization of analytical procedures for characterizing these oils may be consulted with interest (Hazebroek JP, Prog Lipid Res 2000, 39, 477).

According to OIL WORLD, ten oilseeds can be divided into three groups based on their levels of production. Soybean dominates representing over 30% of the ten seeds. This is followed by four seeds (rapeseed/canola, cottonseed, sunflower and groundnut, each in the range 3-13% of the total) making up a further 40% and five others (corn, palm kernel, coprah, sesame, linseed, and castor), each in the range 0.5-2% of the total.
The relative values of world seed oil production for ten major sources  are given below:

The world oilseed production is expected to be about 435 million tons for 2009-2010 and jumped by an average 13 million tons per year during the last 10 years. The world supply of vegetable oils from the ten major sources in 2009-2010 is about 139 million tons.

Recent world statistics for the production of main vegetable oils may be found at the FEDIOL web site and in the USDA database.

Oil sources can be easily sorted according to the importance and  use of the extracted oil.

Thus, information on near the totality of oil sources are distributed below among 5 groups: