The printing process has been during the past 500 years an important component of occidental civilization as printed materials were the principal vehicles for political, sociological and economic events.

It must be noticed that the Chinese began to do printing from a negative relief as early as 600. It is said that this technique together with the invention of paper (2nd century) spread along the caravan route to the west and became well known in Europe around 1400.

By 1450 Johann Gutenberg adapted the screw printing press from the wine press and used an oil-based ink spread on movable types put together to print a page of text.

Gutenberg printed the first book ever: the Bible, the first issue in 1454. 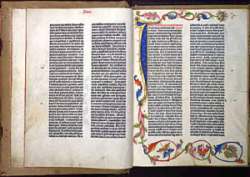 Printed texts enabled information to be so rapidly and widely disseminated as more than 9 million printed books were in circulation 50 years later. It is remarkable that these improvements were not materially surpassed until the beginning of the 19th century.

The main breakthrough was the invention of printer ink by about 1460, only 15 years after the first use of oil paints for pictures. These inks were able to stick onto a metal surface and were based on heat-bodied linseed oil, kept for a year to allow the mucilage to settle. Some unknown plant resins may then have been added. It seems possible that litharge (lead monoxide) was also added to accelerate the drying process.
By 1799 an Austrian printer Alois Senefelder invented lithography. Pictures and texts could be printed from the flat, smooth surface of fine-grained limestone.

As stated by Maroger (1948), it seems evident that the van Eyck research on the cooking of painting oil led to the discovery of book printing and all its consequences. Van Eyck discovered its medium in 1410 but revealed its making only some years before his death in 1440. Gutenberg surely learnt that formula which improved its own typographic system.

Over years, inks were improved but linseed oil and other vegetable oils were mainly used to accomplish this task. The addition of heated vegetal oil rich in polyunsaturated fatty acids changed the oil into almost a varnish, speeding the drying time and giving it more viscosity. The drying time was also improved in the 19th century in adding petroleum distillate, solvent which was also used as the vehicle for organic pigments in color printing inks.

As nearly 250,000 tons of inks are used each year in USA, the petroleum shortage in the mid 1970s and ecological considerations stimulated research to find alternatives to mineral oils and other petroleum products in ink formulations. The use of soy oil-based inks has gained in popularity in reducing their volatile organic content which was considered a major threat to the air environment.
The American Soybean Association was very effective in the late 1980s at promoting the use of soy oils in printing inks. The extent to which soybean oil can replace the petroleum oil varies with the kind of ink, the greatest proportion (about 50%) being possible with news ink. Reports were made on black and colored inks consisting of 100% vegetable oil-based vehicles which met the industry standards for lithographic and letterpress newsprint applications (Erhan SZ et al., JAOCS 1992, 69, 251).

In Europe, alkyd drying oils are progressively replaced by rapeseed or sunflower alkyds. Furthermore, fatty methyl esters from these oils were also investigated (Sabin P et al., OCL 1995, 2, 401).
In 2000, the soy ink’s U.S. market share reached about 22 percent and it was estimated that the full potential could consume 40 million bushels of soybeans annually. Furthermore, 25 percent of the color newsprint in Japan is now soy ink.
For more information about soy ink, check out the National Soy Ink Information Center.