Up to 1991 nothing was known on the organic part of parietal paintings from the Paleolithic time. Many assumptions were made about the chemistry of the binders. If blood has been used 20,000 years ago by Australian Aborigenes, vegetal oils were identified in the binder of the Magdalenian paintings of Fontanet cave in Ariège (France) (Pepe C et al., C R Acad Sci Paris 1991, 312, 929). Several fatty acids were identified by gas chromatography coupled with mass spectrometry. Unsaturated fatty acids (16:1n-7, 18:1n-9, 18:1n-7) represent 18 and 37% and saturated fatty acids represent 50 and 65% in two samples. Due to their degradation, the origin of the oils could not be determined.

The oldest Mediterranean civilization, Greek, Roman or Egyptian have extensively used painting techniques based on mixtures of encaustic (probably rich in bee wax), mineral pigments (iron, copper, manganese oxides) and tempera. Vegetal oils, such as flax, walnut or poppyseed oil were known to ancient Egyptians, Greeks or Romans, but no precise indication of their use in painting may be found. Tempera is a fluid mixture of binder (organic medium), water and volatile additives (vegetal essential oils). Organic binders used by Italian artists were proteinaceous materials available from animal sources (whole egg, animal glues or milk).

At the end of the roman empire and up to the Renaissance period (15th century), this ancient technique was lost and replaced by oil paint and/or tempera. In Italy and Greece, olive oil was used to prepare pigment mixtures but the drying time was excessively long and tedious in the case of figures. This drawback led a German monk, Theophilus, in the 12th century to warn against paint recipes including olive oil (Schoedula Diversarum Artium). It was reported that Aetius Amidenus, a medical writer in the 5th century, mentioned the use of a drying oil as a varnish on paintings. Similarly, it seems that perilla oil was used in Japan in painting after addition of lead in the 8th century. In the 14th century, Cennino Cennini presented a painting procedure integrating tempera painting covered by light oily layers.

According to Giorgio Vasari (1511-1574) in his “Lives of the Artists” (Le vite de piu eccelenti pittori, scultori e architetori, Firenze, 1550), the technique of oil painting, as used till now with few technical modifications, was invented or re-invented in Europe around 1410 by Jan van Eyck (1390 -1441). In fact, as said before, this Flemish painter was not the first to use oil paint, his real achievement was the development of a stable varnish based on a siccative oil (mainly linseed oil) as the binder of mineral pigments. It could be established that the Van Eyck secret was a mixture of piled glass, calcined bones and mineral pigments in linseed oil maintained a long time up to a viscous state at boiling temperature. Besides linseed oil, walnut oil and poppy-seed oil were also used while not so quick-drying. It is probable that painters have already observed that these oils led to accelerated drying time of canvas under the sun. It seems that Van Eyck kept his secret up to about 1440, a few time before his death.

Historians agree that the masterpiece of Van Eyck, the wedding portrait of Giovanni Arnolfini and his wife (National Gallery, London) painted in 1434, is one of the first and the best example of the new technique. If the pigments were the same as those used by Italian painters, the siccative oil has increased brilliance, translucence and intensity of color as the pigments were suspended in a layer of oil that also trapped light. The resulting optical effect obtained with pigment-oil mixtures and stacked layers explain the enameled aspect of Van Eyck works. These innovations in the oil medium produced an art that set the standard for a long time and which has never been surpassed. 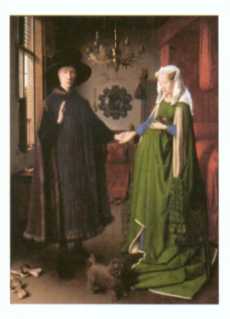 Later, Leonardo da Vinci (1452-1519) improved the preparation in cooking the oily mixtures at low temperature (boiling water) after the addition of 5 to 10% of bee wax, thus preventing a too dark color. While Giorgione (1477-1510), Titian (1488-1576) and Tintoreto (1518-1594) have slightly altered the original recipe, this technique was kept secretly in Italian ateliers nearly during three centuries, thus warranting their supremacy and radiance in whole Europe.

From 1600 and during his 9 year stay in Italy, Rubens has studied the Italian medium and made his own improvements. It was reported by De Mayerne (Pictoria, Sculptoria et quae subalternarum Artium, London, 1620) that Rubens used walnut oil warmed with lead oxide and some mastic dissolved in turpentine to grind mineral pigments.

As said Maroger (The secret formules and techniques of the masters, Edition London and New York, 1948), “Painting had received a rapid and strong impulsion which finally led to the great painting of the Renaissance. But the technique is not enough alone to create a near perfect art, and many improvements would be yet achieved. Each following generation will bring his brick to the building”.

When he was director of dyeing at the Gobelins, and despite having given up fat chemistry, Chevreul was officially in charge of a report on oil paint (Mem Acad Sci 1850, 22, 655, and 685). His work showed, nearly 50 years after De Saussure (1767-1845), that paint drying is accompanied by oxygen fixation which he has detected by a weight increase. Besides several investigations on the role of various metals and the importance of the substrate, he examined the mechanism of the dessication of paint based on linseed oil.

An oil is able to dry or to polymerize to a semi-fluid state if it content enough unsaturated fatty acids, preferably di- or tri-unsaturated. The participation of mono-unsaturated (oleic) acid is not well known but rather limited. Only linoleic (18:2n-6), linolenic (18:3n-3), pinolenic (5,9,12-18:3),ricinoleic (12-hydroxy oleic acid) and a-eleostearic (9c,11t,13t-18:3) acids are constituents of drying oils. A review of the application of vegetable oils in paints has been released by Derksen J et al. (Ind Crops Prod 1995, 3, 225).
Since several years a variety of vegetal and non-edible oils are used in the industry of paints as they are able to dry quickly, sometimes more quickly than linseed oil. Among them, tung oil, oiticica oil, perilla oil, poppyseed oil, soybean oil, sunflower oil, dehydrated castor oil, as well as many fish oils are used to make siccative mixtures (Lavers B, Oils and Fats Int 2003, 19, 19). The iodine number (number of grams of iodine absorbed by 100g of oil) is frequently used to classify drying oils. Thus, they are considered as drying if the iodine number is greater than 130, semi-drying if it is between 115 and 130, and nondrying if it is less than 115.

Drying oils (mainly linseed oil) that are heated to about 300° C under conditions that exclude oxygen give products which are referred to as stand oils. They become polymerized (the molecular structure is changed while the composition remains). They have a lower iodine number (lower unsaturation) than the cold-pressed oils, they dry slowly, they yellow less than the native oils, and form a tough strong film. They imparts to the paint an enamel-like smoothness and tend to make the paint fuse and blend. They are used as an ingredient in the diluent, or painting medium.
Several new oils have been studied to improve the performance of paint and coatings. Thus, oils from Lesquerella, Euphorbia lagascae, Vernonia galamensis and Calendula officinalis are used to increase resistance or to decrease drying time.

The drying process itself results in a polymerization upon uptake of oxygen. That complex mechanism includes mainly the oxidative degradation of unsaturated fatty acids leading to the formation of aldehyde groups later transformed into carboxylic groups. Thus, dicarboxylic acids are progressively formed with ageing of the mixture, pimelic, suberic, azelaic, and sebacic acids being mainly found in old paints (Surowiec I et al., J Chromatogr A 2004, 1024, 245).
European painters mostly used linseed, walnut, and poppyseed oil. Hempseed and pinenut oil have been also mentioned in the early literature.
A dated history of artists, pigments, mediums and painting techniques may be found in a very documented web site.

Since the 1940s, evolution of the classical oil paint media has been characterized by the introduction of alkyd resins. The first alkyd paint products for artists were produced by DuPont in 1931. Artists such as Jack-son Pollock and Picasso experimented with alkyd-based paints.
Alkyds are oil-modified polyesters manufactured from polyols (typically glycerol or pentaerythritol), aromatic polybasic acids(phthalic anhydride and phthalic acids are the most common) and a source of fatty acids from a vegetable oil. Carbon chains are linked to the polyols by carbon-carbon bonds instead of carbon-oxygen bond as in triacylglycerols. When formed with glycerol and fatty acids, they can be considered as trialkyl-glycerol. Drying and semi-drying oils, such as linseed, soybean and castor oil are used for the production of these alkyd resins. The fatty acid portion plays a fundamental role in regulating the properties of alkyd paints, such as cross-linking potential, yellowing tendency, and compatibility with different solvents (T. Learner, Analysis of Modern Paints, Getty Publication, Los Angeles, 2004).