For the isolation of larger quantities of individual compounds that it is possible by TLC, the lipid extract is first fractionated by preparative column chromatography. Thus, a separation of the whole glycolipids on a silica gel column (elution with pure acetone) allows to remove the bulk of neutral lipids (triglycerides, cholesterol…) and also phospholipids which may co-migrate with glycolipids on TLC plates or columns. To recover the acylated steryl glycosides, an elution with a mixture of chloroform/acetone 92/8, v/v) must be inserted between the chloroform and the acetone elution steps.

This glycolipid fraction is thereafter efficiently separated into its main components by chromatography on a DEAE cellulose column, as described below.

Silica gel column chromatography can also be used for pre-fractionation with mixtures of chloroform with increasing proportions of methanol or acetone.

We give below an elution scheme used to elute individual glycolipids. The composition of the eluents may vary to some extent and may depend on the lipid load, the hydration state of the support and the size of the column. Usually, the volume of each fraction amounts to about 10 times the volume of the silica gel bed.

Most of plant pigments are eliminated by the chloroform wash but some others are eluted with the increasing proportions of acetone and remain difficult to eliminate.

In his famous paper, Lepage M (J Lipid Res 1964, 5, 587) has reported a fractionation scheme including an elution of esterified steryl glycosides with hexane/diethyl ether (3/7, v/v) following elutions with pure hexane and hexane/ether (1/1, v/v). Thereafter, steryl glycosides and glycoglycerolipids may be eluted with acetone/methanol (90/10, v/v).

Other information on the purification of steryl glycosides may be found in another part of this site.

Separation of lipids by ion-exchange chromatography is based on the ionic groups present in the molecule but some other groups such as hydroxyl groups exert an influence.
Non-ionic, acidic and zwitterionic lipids are separated on several ion-exchange materials: diethylaminoethyl cellulose (DEAE), triethylaminoethyl cellulose (TEAE) or ion exchange resins. DEAE is the most frequently used to separate lipid classes (Rouser et al in “Liquid chromatographic analyses, 1976, Dekker, vol 3, 713). Carboxymethyl cellulose is also used for preparative separation of phospholipid classes.

Here, we describe two reliable procedures to purify and separate the glycolipid fraction in vegetal and animal extracts. They are particularly useful to separate charged from neutral glycolipids.

Preparation of the DEAE cellulose
Wash in a Becher vessel the cellulose powder with 1 N HCl (3 volumes) during 5 min under slight agitation and wash with water until neutrality. Remove the fine particles after some minutes settling.
Wash similarly with 0.1 N KOH and rinse with water.
Wash with 3 volumes pure acetic acid, change and keep overnight in acetic acid.
Pour a portion of cellulose suspension into a glass column (as for silica gel): a bed height of 8 cm (1 cm diameter) is convenient for up to 20 mg lipids.
Wash the column with:
– 5 volumes of methanol (30 ml/g cellulose)
– 3 volumes of chloroform/methanol (1/1, v/v) (20 ml/g)
– 5 volumes of chloroform (30 ml/g)

The glycolipid fraction isolated on a silica gel column is evaporated and dissolved in chloroform with the help of a short sonication.
The sample is applied on the cellulose column and eluted slowly (no more than 2 ml/min) with the solvent sequence below:

Salts in the last column fraction are easily removed by evaporation followed by a Folch wash (dissolve in a known volume of the mixture chloroform/methanol/water, 8/4/3).

The lipid extract is applied to 2 ml of resin supported in a 6 ml syringe with upper and lower Teflon frit and allowed to flow by gravity. The column is washed with chloroform/methanol/water (16/16/5, v/v) until the eluate runs clear. This fraction contains neutral lipids which after drying are redissolved in a known volume of chloroform/acetic acid (99/1). The charged lipids are eluted with 6 ml of chloroform/methanol/water/ammonia (16/16/5/1, v/v) containing 0.1% triethylamine. After drying, these lipids are redissolved in isopropanol/hexane/water (3/1/1, v/v).

A method utilizing strong anion exchanger cartridges was developed to separate gangliosides (Kato T et al., J Oleo Sci 2008, 57, 397). Total lipids are rapidly separated into neutral and acidic lipids, neutral lipids passed through the SAX cartridge while acidic lipids adsorbed onto the cartridge. Gangliosides were eluted by increasing the concentration of ammonium acetate. The gangliosides yield of this procedure as higher than 95%.

HPLC is the most efficient method to separate  and estimate the amount of each glycoglycerolipid in an unknown sample. The use of a light-scattering detector allows the direct quantification of lipid compounds without  trouble from mobile-phase solvents as it could be observed with UV detection.

An efficient procedure was recently reported using optimal HPLC conditions with a silica column, a simple binary gradient system and a light-scattering detection (Sugawara T et al., Lipids 1999, 34, 1231). Although the described method is efficient to separate glycolipid classes, the phospholipids present in plant extracts may be also estimated. To shorten the analysis time and to prevent the interference of other polar lipids it appears useful to concentrate previously the whole glycoglycerolipid class on a silica gel column by acetone elution.

Extraction: fresh plant samples are cut into pieces and treated to inactivate hydrolytic enzymes. After homogenization the residues with a chloroform / methanol mixture, the lipid extract is redissolved in chloroform and subjected to a separation on a silica gel column. The glycolipid fraction is evaporated and dissolved in a minimum volume of chloroform.
Column: Lichrospher Si 60 from Merck (120×4 mm, 5mm) maintained at 40°C.
Mobile phase: solution A: chloroform, solution B: methanol/water (95/5, v/v).
Flow rate: 1 ml/min
Gradient: linear and continuous gradient from time 0 (99% A and 1% B) to time 15 min (75% A and 25% B) followed by an isocratic step of 5 min and a re-equilibration time of about 10 min with the conditions of time 0 prior the next analysis.
Detection:  glycoglycerolipids can be detected between 210 and 230 nm but a better sensitivity with a fine baseline is obtained with a light-scattering detector. 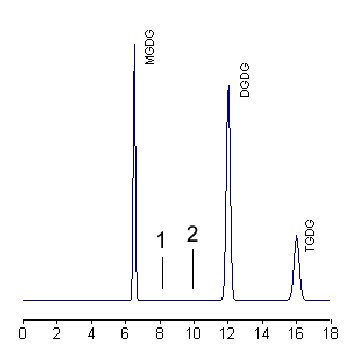 A calibration curve is run with solutions allowing to inject 5 to 50 mg of each glycolipid. Calibration curves are expressed as linear or power equation according to the best obtained correlation coefficient.
If sterol glycosides or ceramide monohexosides (equivalent to cerebrosides) are present they elute at position 1or 2, respectively. With mild alkaline treatment, only two peaks corresponding to these compounds remain present.
In some lipid extracts a peak at about 16 min can be found and corresponds to a trigalactosyl diglyceride (TGDG).

An efficient HPLC separation of glycolipid fractions from oilseeds has been described using a Zorbax-Sil column and an isocratic elution of isooctane/2-propanol (1/1, v/v), the detection was done at 206 nm for 30min. A 10 min regeneration with the same solvent was done before the next analysis (Ramadan MF et al., Food Chem 2003, 80, 197-204). Glycolipids were quantified by isolation of the individual subclasses, followed by hexose measurement using the phenol/sulfuric acid method (Southgate DRT 1976, Dtermination of food carbohydates, pp 108-9, London, Applied Sc Pub). The elution times were 8 min for acylated steryl glucoside, 12 min for MGDG, 13 min for steryl glucoside, 15 min for cerebroside, 19 min for DGDG, and 21 min for sulfoquinovosyldiacyl glycerol.

The simultaneous quantification of glycoglycerolipids including sulfoquinovosyldiacylglycerol may be efficiently done by HPLC using a diol column and a light scattering detector (Yunoki K et al., Lipids 2009, 44, 77). The detection limit for SQDG was 0.1 mg per injection.