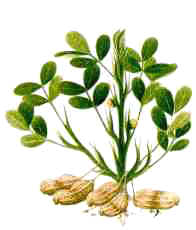 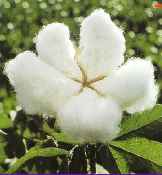 Cotton (Gossypium hirsutum, Malvaceae) is probably known since 3000 B.C. Around 600 B.C., cotton came from India to Egypt and was brought in Europe by Alexander the Great (330 B.C.). This species contributes about 90% of the world production of fiber. The cotton oil was mentioned by Herodot (450 B.C.) but its worldwide use was born only in the 19th century. The kernel comprises about 50% of the seed and contains about 30% of oil. The world production of cottonseed was in 1999 about 36 million tons. About 97% of triacylglycerols are composed of palmitic (22%), oleic (18%) and linoleic (57%) acids. The composition in triacylglycerol species is characterized by the presence of LLP (29%), LLL (17%), OLL (14%), OLP (12%), and PLP (8%) (Lisa M et al., J Chromatogr A 2008, 1198-1199, 115).
Cotton oil is characterized by its content in gossypol, a phenolic pigment involved in its storage stability, and in cyclopropenoid fatty acids which give the distinctive red color of that oil.
The entire production of cotton oil is used in the manufacture of salad and cooking oils, shortenings and margarine, and to a lesser extent to produced soaps.

Coconut palms are known to have been used in India since 500 B.C., the Spanish name coco dating from around 1500. Its origin is a subject of dispute, South America or Southeast Asia. Coconut palm known as “tree of life” is one of the most useful trees in the world. Population of humid tropical regions is almost entirely dependent on coconut as a source of food, fuel and shelter. In the 19th century the tree was used in Europe quite exclusively for the fibers. Plantations of palms begun at the end of the 18th century in Sri Lanka with the Dutch and Portuguese colonization. 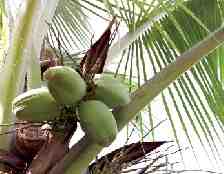 4 – Palm kernel oil, 5.8 mt in 2011/12, in Malaysia, Indonesia and Africa. The first producer is Malaysia (52%), the second being Indonesia (28%). Statistics of world supply and consumption may be found in a specialized web site.

Oil palm (Elaeis guineensis Jacq.) produces fruit which consist of a hard kernel (seed) inside a shell (endocarp), which is surrounded by a fleshy mesocarp. The mesocarp contains about 49% palm oil and the kernel about 50% palm kernel oil. Palm Kernel Oil is yellowish in colour and has a fatty acid composition different from that of palm Oil. Palm Kernel Oil contains mainly lauric acid (C12:0) and more than 80% saturated fatty acids. Palm Kernel Oil closely resembles Coconut Oil in its fatty acid formulation and characteristics, therefore is a cost effective substitute for Crude Coconut Oil in the production of quality soap. As this oil is rich in lauric acid, it is used in the synthesis of lauryl alcohol for detergent industry. The composition in triacylglycerol species is characterized by the presence of LaLaLa (22%), LaLaM (17%), LaMM (9%), LaLaO (6%), and CCLa (6%) (Chen CW et al., Food Chemistry 2007, 100, 178). 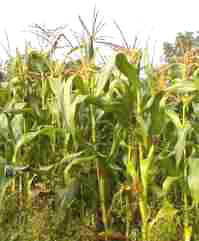 Maize is one of the plants the most anciently cultivated by human, it originated probably from Central America (Mexico, New Mexico) where Indians used it since thousand years. Christopher Columbus brought in Spain some maize seeds from his first exploration (1493) and, through Italy, the plant was spread in the whole Europe. Whereas the total world production of corn amounted to about 600 million tons in 1999, the corn oil production is very low, about 400,000 tons. Corn seed has a maximum total oil content of 12% in some varieties used for starch production. Triacylglycerols comprise about 80%, phospholipids about 8% and glycolipids about 2-5%. Corn oil is rich in tocopherols (up to 1 g per Kg), which account for its excellent stability.
About 60% of corn oil is consumed as salad and cooking oil, the other use (30%) being for manufacture of margarine. A very small proportion is used for some industrial purposes (pharmacy, cosmetics). 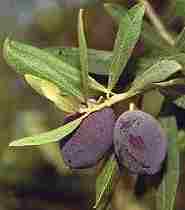 Olive trees, originating from Asia Minor, characterize the Mediterranean civilization since thousand years. Olives are mentioned several times in the Bible. It is thought that they appeared in Europe around 1700 B.C. but were spread over the Roman Empire around 200 B.C. The oil content of the whole olive is about 30% but only 20% of the tonnage of fruit can be extracted by pressure. The world production of fruit was in 1999 about 14 million tons, Spain having the highest crop (32%), followed by Italy (19%), Greece (14%) and Turkey (11%). There is an increasing interest in growing this oil in USA and in Australia.
The amount of olive oil available varies from year to year and fluctuates from 1.4 to 2 million tons from 1960 to 1995. In 2003-2004, 79% of the world production of olive oil are expected to be located in the European Community (about 2 million tons), 6% in Tunisia, 5% in Turkey, 4% in Syria, 2% in Morocco, and 1% in Algeria.

The fruit or drupe is similar to that  of a cherry and is the raw material for the production of olive oil and table olives.
The pulp is rich in oil (75% on dry weight basis), the kernel containing only 12-28% oil. Olive oil is known to contain a large proportion of oleic acid (53-86%). Combined with its natural antioxidants, this high content in oleic acid gives to olive oil an exceptional stability.
Many studies were devoted to the physical and chemical changes of the olive fruit, both during development and as a result of the processing to produce table olives (Review in : Bianchi G, Eur J Lipid Sci Technol 2003, 105, 229).
Good-quality olive oil is mainly used for edible purposes, the rest being used in industry (soap, textile, cosmetics, pharmacy). 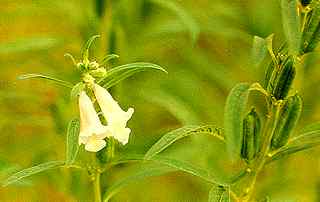 It is thought that this plant was used by the Persians since about 4000 B.C. Sesame oil  was used as a remedy and as a cosmetic (Homer reported in Iliad that the goddess Hera spread abundantly sesame oil on her skin before she seduced Zeus). The primary center of origin could be the Fertile Crescent or the Indian sub-continent. The plant is cultivated in tropical to temperate zones, from 40°N to 40°S latitude. India is the major producer (ca. 25% of the world production). Sesame seeds are used whole, or processed for oil and meal. Whole seeds are used to prepare candies and halva, in baking, soup, and porridge. Sesame seeds have a high oil content (about 50%) but crops are heavily variable. The oil contains ca. 10% palmitic acid, 4% stearic acid, 47% oleic acid and 39% linoleic acid, is expensive and used for culinary purposes mainly in countries of production. Its good conservation capacities is due to the presence of a potent antioxidant, sesamol, release from sesamolin upon hydrolysis by storage. The oil is also used as a solvent or carrier for medicine and cosmetics. The world production of sesame seeds was in 1999 about 2.4 million tons, India having the highest crop (27%), followed by China (21%), Sudan (9%) and Myanmar (Burma) (8%).

To learn more on the fatty acid composition (weight percent) of these plant oils :