Around the world, it must be noticed that about 140 million tons of vegetal oils were produced in 2009/2010 and that about 70% of that production are accounted for four vegetal species:

Soybeans (Glycine soja) stem from China (mentioned at the time of the Emperor Chennung, 2800 B.C.). They were brought in Europe by missionaries (1740) and first grew in the Paris botanical garden. They were first taken to the United States as inexpensive ballast in 1804. A century later, G.W. Carver laid the foundation of new ideas about soybeans. 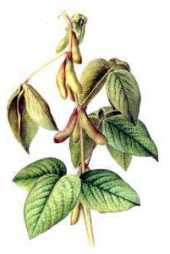 Today, soybean is the world’s leading source of oil as well as by-products and protein-rich seed meal. The highest domestic consumption is in Asia where soybean is a basic food since ancient times.
Besides the oil content of about 20%, the high protein content (about 35%) is of special importance as a protein source in the world. Crude soybean oil contains about 88% neutral lipids, 10% phospholipids and 2% glycolipids. Refining of soybean oil affords valuable by-products including lecithin during the degumming stage as the most available source of phospholipids and mixed tocopherols as a product of deodorisation.
The composition in triacylglycerol species is characterized by the presence of LLL (19%), OLL (15%), LLLn (10%), LOP (9%), OLO (6%), and OLLn (6%) (Holcapek M et al., J Chromatogr A 2003, 1010, 195). About  50% of soybeans come from the USA, 20% fro Brazil, 11% from Argentina, 9% from China, and 4% from India. More than 55 million hectares are used in the world for its cultivation.
Soybeans are the vegetable oilseed grown in largest amount : the world soybean production amounted to about 156 million tons in 1999-2000 and the yield  is reported to be in the range 2300-4000 kg/ha. That production represents about 52% of total global oilseed production.
About 21% of soybean oil are produced in the United States, 17% in Brazil, 26% in China, 16% in Argentina, 5% in European Union,  and 4% in India. The major usages of soybean oil are for food industry (77%), biofuels (17%), and oleochemicals (4%).
Recent world statistics on oilseed production in U.S. and in the world are found in the web site of the American Soybean Association
Refined soybean oil, before or after hydrogenation, is used in numerous edible products (more in North America than in Europe) : spreads, butter, margarine, frying and salad oils, mayonnaise, and as essential components of most baked goods. Soybean oil is also an important component of inks used for newsprint. Soybean’s many uses can be viewed on the web site of the American Soybean Association. Soybean oil has been proposed for the synthesis of polyurethane suitable for wide range of potential biomedical applications (Miao S et al., Eur J Lipid Sci Technol 2012, 114, 1165).
Pictures relating to soybean production, transportation and marketing may be found on the web site of the American Soybean Association.
Information on soybean may be found on the web sites SOJAXA and American Soybean Association.

2 – Palm oil, about 18% of the world production, in Malaysia, Indonesia and Africa. In 2000/01 the production was 24.3 million tonnes and in 2011/12 51.9 million tonnes, I.E. a 113 % increase in 11 years. The annual worldwide production of palm oil is the highest of any edible oil. In 2011, the major usages of palm oil are for food industry (77 %), biofuels (10 %), and oleochemicals (8 %).Oil palm (Elaeis guineensis Jacq.) was first reported by the Portuguese sailor Eannes in 1434. The oil palm is native to West and Central Africa where its food use dates back to over 5000 years. Its botanical classification is derived from the Greek elaion (oil) and the specific name of guineensis is indicative of its origin from the equatorial Guinea coast. In 1763, Nicholas Jacquin produced one of the earliest illustrations of the oil palm tree and he is remembered in its scientific name (Hartley, C.W.S.  The Oil Palm 1988 3rd edn),

This plant is the oil producer with the highest yield, one tree can produce up to 20 tonnes  of fruit bunches per year. Each fruit consists of a hard kernel (seed) inside a soft shell (endocarp), which is surrounded by a fleshy mesocarp. The mesocarp contains about 49% palm oil and the kernel about 50% palm kernel oil. It has been reported that the commercial palm oil contains about 96% neutral lipids, 2.4% phospholipids and 1.4% glycolipids.
The triglyceride composition of palm oil is related to the formation of two main fractions, one is liquid, the other solid at ambient temperature. The composition in triacylglycerol species is characterized by the presence of LOP (24%), OOP (17%), LLP (8%), OLO (5%), and OOO (4%) (Holcapek M et al., J Chromatogr A 2003, 1010, 195). According to Voon PT et al., (Palm oil development, 2008, 48, 14) , palm olein TG contains only 7–11% palmitic acid at the sn-2 position, while 60– 70% of this position is occupied by oleic acid.
An exhaustive review on the chemistry and biochemistry of palm oil  has been written by Sambanthamurthi R et al. (Prog Lipid Res 2000, 39, 507). The oil is mostly used as shortening, margarine and frying fat. It is also used in soap, candle manufacture and in the tin-plate industry. Its use as fuel in oil based biodiesel is increasing, mainly in Europe (about 500,000 tons in 2005).
About 37% of palm oil are produced from Malaysia where two thirds of the cultivated land are under oil palm. The average yield is about 4 ton/ha on a worldwide basis. The world production of palm oil was about 48 million tonnes in 2010/11. The highest production is in 2012 in South East Asia (49% in Indonesia, 37% in Malaysia , 3% in Thailand) and in Africa (2% in Nigeria, 1% in Cameroon and Côte d’Ivoire). Statistics of world supply and consumption may be found in a specialized web site.
High amounts of saturated fats in palm oil (high amount of palmitic acid) have been considered as less cardiovascular friendly than others. Generally, health care professionals consider palm oil as a hypercholesterolaemic fat. New data on the incidence of the sn-2 position of oleic acid seem to lead to new nutritional concepts for palm oil.
Several features and applications of palm oil have been reviewed (Norhaizan ME et al., Lipid technol 2013, 25, 39). 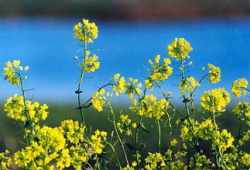 In the mid-1930s it was grown almost entirely (90%) in China and India. Interest in this oilseed crop was developed during and after World War II. Until 15 years ago, rape oil was unsuitable for human nutrition because of its high content in erucic acid (up to about 50% of C22:1 n-9) which was shown to influence negatively the metabolism of several organs. The erucic acid-rich oil was used in Europe as a lamp oil, in the production of soaps and paints, and for cooking and in Canada as a lubricant. New varieties were developed with low erucic acid content (lower than 2%) and are known under the name Canola. Yields in the range 900-3000 kg/ha are reported. There is still a need for some high-erucic oil for industrial use (Lipid Technol 1994, 6, 79). Increasing quantities of rape oil are being used in Europe for biodiesel fuel, in the form of ethyl esters.
Seed breeders are trying to reduce the content of saturated fatty acids, to reduce the level of linolenic acid, to increase the level of oleic acid, lauric acid or g-linolenic acid. Rapeseed oil is also unusual in having substantial amounts of eicosenoic acid (C20:1 n-9). Its level has been reduced by plant breeding from about 10% to a level lower than 1%.
The average composition in triacylglycerol species is characterized by the presence of OLO (23%), OOO (17%), OLnO (11%), OLL (8%), OLLn (6%), OLnLn (4%) and LLLn (3%) (Holcapek M et al., J Chromatogr A 2003, 1010, 195).
The world production of rape seed was about 60.4 million tonnes and of oil was about 24.3 million tonnes in 2011/12. The EU-27  is the first producer of seeds (34%), then China (22%), Canada (21%), and India (11.6%). The major exporters of oil are Canada and Europe, the United States being the major importer. More than 33 million hectares are used in the world for rapeseed culture.
The use of that oil has changed rapidly during the 21rst century since the non-food use of rapeseed oil was only about 8% the production in 2000 while it amounted to about 33% in 2010.

General information and many links on Canola may be found on the web site of the Canola Council of Canada.

Sunflower (Helianthus annuus) originated from America where it was present when Europeans arrived. It was reported to be present in Arizona and New Mexico 3000 years before Christ. The Spanish explorer Monardes brought the plant in Spain in 1569 and from there it spread in Europe and Russia. Tsar Peter the Great brought himself the plant from Europe in Russia where its production reached the first rank in the world: about 18 % in Russia and 24 % in Ukraine, and 22.5 % in EU-27 (France, Spain, Hungary, Romania, Bulgaria) in 2011. Russian seed was later taken back to North America and to Argentina. 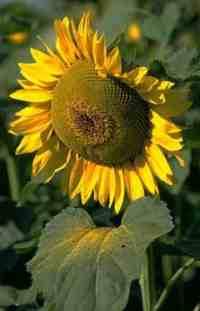 The world production of sunflower seed was about 31 million tons and sunflower oil about 14.7 million tonnes in 2011/12, yields between 500 and 2600  kg seeds/ha are reported. The whole seed contains about 40% oil and about 25% protein suited for animal feeding. Neutral triacylglycerols constitute the major lipid class in sunflower seeds. Phospholipids and glycolipids constitute less than 4% of the total lipids.
The composition in triacylglycerol species is characterized by the presence of LLL (33%), OLL (25%), LOP (11%), and OLO (6%) (Holcapek M et al., J Chromatogr A 2003, 1010, 195) (Holcapek M., J Chromatogr A, 2003, 1010, 195).
This oil is available with three fatty acid compositions. The regular oil is linoleic-rich (46-74 %) and two variants are also found, the high-oleic acid (Sunola, Highsun, 75-90 % oleic acid and 2-17 % linoleic acid) and mid-oleic (NuSun, 43-72 % oleic acid and 19-45 % linoleic acid). The variant NuSun is grown only in the United States. Other sunflower oils have been developed with enhanced tocopherol content and with a higher content of saturated acids.

An history of the plant and other details may be found on the Web Site of the National Sunflower Association.