Autoxidation and photo-oxidation of monoene, diene and triene fatty acids give similar but not identical products as it is summarized below (see review: Porter NA et al. Lipids, 1995, 30, 277) . Owing to possible allylic rearrangements in the oxidation products, the use of their distribution pattern for the exploration of the oxidant system remains questionable. Fatty acids may be autoxidized either in free form or combined into glycerolipids or glycolipids. Thus, oxidized triacylglycerol monomers include molecules containing different oxygenated groups, mainly hydroxy, keto, and epoxy, as well as short-chain fatty acyl and short-chain n-oxo fatty acyl groups as the main products (Chang SS et al., JOACS 1978, 55, 718; Velasco J et al., Eur J Lipid Sci Technol 2004, 106, 728). It is noteworthy that a polyunsaturated fatty acid (DHA) was shown to be more stable to oxidation when located at the sn-2 position of triacylglycerol compared to sn-1(2) (Wijesundera C et al., JAOCS 2008, 85, 543).
The identification of the products of fatty acid autoxidation often provides valuable mechanistic information on the extent of the peroxidative injury.

Studies of the autoxidation of oleic acid process date back to 1943 (Farmer EH et al., J Chem Soc 1943, 119 and 541). These authors suggested the mechanism involved in the formation with near equal probability of a hydroperoxy group at positions 8, 9, 10 and 11 of oleic acid. The 8- and 11-hydroperoxides have a cis/trans ratio near 1, while the other products are mainly trans. Rearrangements may happen in which the peroxy group migrates across the allylic backbone, thus, a 11-trans hydroperoxide may derive from a 9-trans product. Details are found in Porter NA et al (Lipids 1995, 30, 277).

In contrast, photo-oxidation produces equal amounts of only two products, 9- and 10-hydroperoxides (double bond in D10t and D8t, respectively).

Linoleic acid gives only two autoxidation products in equivalent amount (9-OOH and 13-OOH). These two isomers can change from c,t to t,t structure with exchange of the hydroperoxide group from C9 to C13 or vice versa but keep the conjugated diene structure, thus, four major products are found. They are also able to produce cyclic peroxides by addition of singlet oxygen to their conjugated dienes.

Nitric oxide ( .NO) and .NO-derived reactive species react with fatty acids during autocatalytic oxidation reactions to yield nitrate derivatives which were proved to be also cell signaling molecules. Nitrolinoleate has been shown to be present in plasma and cell lipids and to have vasomotor activity.

The hydroperoxides (and their distribution) produced from linolenic acid by autoxidation or photo-oxidation are given below:

In addition, the formation of bis-hydroperoxides, hydroperoxy peroxides and hydroperoxy diperoxides have been described by further oxidation of monohydroperoxides. These secondary transformations are inhibited by tocopherols.

The autoxidation of arachidonic acid illustrates below the types of products that are formed in polyene autoxidation.

Cyclic peroxide products have been described during autoxidation of arachidonic acid. Thus, the four peroxy radicals having oxygen substitution at carbons 8, 9, 11 and 12 give rise to several cyclisation products such as monocyclic or bicyclic peroxides (shown previously) and epoxy alcohols. Thus, the 5- and 15-peroxy radicals, which do not have a competitive cyclisation pathway, are formed at relatively higher rates that the other peroxidized products.

The complexity of the product mixture depends on the number of double bonds in the carbon chain.

F2-isoprostanes are formed in situ in arachidonic acid-containing phospholipids, and then released in free form.
Although isoprostanes are thought to be formed only by a cyclooxygenase-independent mechanism, evidence was reported for an enzymatic formation.
Free radical processes mediated by NO2 were shown to generate a new family of arachidonic acid trans-isomers which are biologically active.

New peroxidation products of eicosapentaenoic acid (EPA), F3-isoprostanes, were shown to be formed in vitro (Nourooz-Zadeh J et al., Biochem Biophys Res Commun 1997, 236, 467). Later, several regioisomers, designated as 5-, 8-, 11-, 12-, 15-, and 18-series F3-Isoprostanes (F3-Isop) were shown to be formed in significant amounts in vitro and in vivo from the free radical-catalyzed peroxidation of eicosapentaenoic acid (Gao L et al., J Biol Chem 2006, 281, 14092). It was observed a relative abundance of 5- and 18-series F3-IsoPs over the other series. The supplementation of animals with EPA was shown to markedly increase the levels of F3-IsoPs in the heart with a concomitant decrease of the levels of pro-inflammatory F2-IsoPS derived from arachidonic acid. 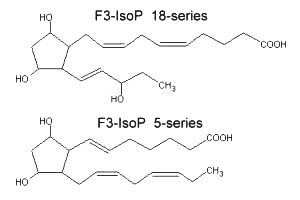 Highly reactive cyclopentenone isoprostanes (A3/J3-isoprostanes) are produced in vitro and in vivo from EPA oxidation (Brooks JD et al., J Biol Chem 2008, 283, 12043). Depending on the site of oxygen insertion on EPA molecule, one of eight different hydroperoxides is generated. After further oxidation, ring arrangement and dehydration, six different series of A3 and J3 isoprostanes are formed. One of them is shown below.

It was demonstrated that these compounds are able to induce Nrf2-directed gene expression, leading to a regulation of the detoxification of reactive oxygen species.
These results support the hypothesis that they initiate the beneficial effects associated with fish oil consumption on human health (Gao L et al., J Biol Chem 2007, 282, 2529).
Several autoxidation products of eicosapentaenoic acid (EPA, 20:5 n-3) have been identified in vitro and in vivo (Yin H et al., J Biol Chem 2007, 282, 29890). Based on the free radical mechanism of arachidonic acid autoxidation, height regioisomeric hydroperoxydes can be generated. These products can be further oxidized to generate several monocyclic peroxides, serial cyclic peroxides, bicyclic endoperoxides and dioxolane-endoperoxides.

It was shown that the oxidation of docosahexaenoic acid (DHA, 22:6 n-3) led to the formation of F2-isoprostane-like compounds which were named F4-neuroprostanes (NeuroP) (Roberts LJ et al., J Biol Chem 1998, 273, 13605). It is noteworthy that these authors have determined that the concentration of these compounds in the human cerebrospinal fluid was more elevated in patients with Alzheimer’s disease than in matched controls. Thus, they may provide a unique marker of oxidative injury to the nervous system (Reich EE et al.,  Am J Pathol 2001, 158, 293). Their generation was described to result from a non-enzymatically oxidative stress on DHA radicals, which forms eight F-ring neuroprostane regioisomers, following addition of molecular oxygen, endocyclization, another oxygen addition and reduction.

A facile nomenclature was proposed to allow the rational differentiation of each of the isomeric structures comprising the families of the neuroprostanes (Taber DF et al., Prost Lipid Med 2005, 78, 14). This nomenclature follows standard chemistry rules and conforms to prostaglandin conventions.
Eicosanoids with the E/D-type prostane rings formed by oxidation of DHA are unstable and dehydrate to cyclopentenone-containing compounds possessing A-type and J-type prostane rings, respectively (Fam SS et al., J Biol Chem 2002, 277, 36076). Some of them (A4/J4-neuroprostanes) were shown to have anti-inflammatory properties in macrophages treated with lipopolysaccharide (Musiek ES et al., J Biol Chem 2008, 283, 19927). These results have implications for understanding the anti-inflammatory properties of n-3 fatty acids.

A study has revealed that the lipid mediator 4(RS)-4-F4t-neuroprostane derived from DHA has cardiac antiarrhythmic properties in counteracting the effects of spontaneously formed oxygenated metabolites of lipids (Roy J et al., Free Rad Biol Med 2015, 86, 269). Thus, the oxidation of DHA to 4(RS)-4-F4tNeuroP is necessary to prevent ischemia-induced arrhythmias.
Other cyclopentenone isomers (A2 and J2-IsoPs) were shown to inhibit the inflammatory response in macrophages (Musiek ES et al., J Biol Chem 2005, 280, 35562). These findings suggest an important role of the oxidative stress in the inflammatory response and the ability of n-3 fatty acid to attenuate these responses.

A review has explored in detail the progress in the isoprostanoid chemistry and biology, including neuroprostanes, that has been achieved in the past three decades (Galano JM et al., Prog Lipid Res 2017, 18, 68).

In 2002 new arachidonic acid peroxidation products were discovered and as they are related biosynthetically to the isoprostanes and chemically characterized by a substituted tetrahydrofuran ring structure, they were named isofurans (Fessel JP et al., PNAS 2002, 99, 16713). There are formed by a free radical mechanism independent of the cyclooxygenase pathway.

It was shown that they are produced in vivo by a free radical mechanism independent of the cyclooxygenase pathway. These molecules are of interest as they provide a sensitive index of free-radical peroxidation under conditions of elevated oxygen tension where the production of isoprostanes appears to be limited. Their molecular structure suggests that 256 enantiomerically-pure isofurans may be formed. Thus, a nomenclature system was proposed to differentiate all the possible structures (Taber DF et al., Prost Lipid Med 2004, 73, 47). As increased levels of isofurans were detected in brain tissue of patients affected by several neural diseases, the determination of these molecules may be of value in appreciating oxidative damages to brain tissue (Fessel JPet al., J Neurochem 2003, 85, 645).
The biosynthesis, the nomenclature, the chemical synthesis of furanoids from a-linolenic acid (C18:3 n-3), arachidonic acid (C20:4 n-6), adrenic acid (22:4 n-6) and docosahexaenoic acid (22:6 n-3) as well as their identification and implication in biological systems are highlighted in a review (Cuyamendous C et al., Biochimie 2016, 130, 49).

Neurofurans are an analogous family of compounds formed in vivo and in vitro from the free radical-initiated peroxidation of DHA (Song WL et al., J Biol Chem 2008, 283, 6). Sixteen regioisomers have been described by in vitro lipid peroxidation. One of them is shown below.

The levels of these compounds were elevated in the brain cortex of a mouse Alzheimer disease. Thus, neurofurans may prove useful in diagnosis of neurodegenerative diseases.

It was determined that these adducts are more abundant in ocular tissues from age-related macular degeneration (AMD) than normal human donors. As their concentration could be determined in plasma, these oxidation derivatives may have diagnostic utility in predicting AMD susceptibility. Animal model for age-related macular degeneration has been developed from an inflammatory signal discovered in eye tissue and blood from these patients (Hollyfield JG et al., Mol Neurobiol 2010, 41, 290).