FATTY ACIDS  OR  OTHER LIPIDS

The majority of chain-cleavage products formed from monohydroperoxides are molecules belonging mainly to two groups, simple hydrocarbons and short-chain aldehydes. Other far less characterized molecules were described and bear epoxy, alcohol, or ketone group, either alone or in combination, even with an aldehyde function (hydroxyaldehydes). Dicarboxylic acids may also be formed by a two-step oxidation process. Most of these substances result from cleavage off the carbon bonds adjacent to the hydroperoxy group. Thus, one fragment derives from the methyl end of the fatty chain, the other fragment being free or remaining bound to the parent glycerolipid via the ester linkage. These transformed lipids (with shortened or modified acyl chains) remain poorly studied despite their suggested physiological activity.
Thus, a novel family of oxidized phosphatidylcholine was shown to serve as ligands for the macrophage scavenger receptor CD36 (Podrez EA et al., J Biol Chem 2002, 277, 38503). These structures were shown to derived from phosphatidylcholine molecules having C16:0 at the sn-1 position and either C18:2n-6 or C20:4n-6 at the sn-2 position. Thus, the active species on CD36 have been identified to have an sn-2 acyl group that incorporates a terminal γ-hydroxy (or oxo)-α,β-unsaturated carbonyl (alcohol or aldehyde group). These oxidized phosphatidylcholine species are likely involved in the CD36-mediated recognition of oxidized lipoproteins and foam cell formation in vivo.

Riley (Riley CA et al., Science 1974, 183, 208)  first reported that hydrocarbon gases were released by mice upon treatment with CCl4. Since then, several reports appeared demonstrating that  the amount of these gases may be used as an index of lipid peroxidation, mainly in complex biological systems.

The most probable event of hydroperoxide decomposition is the cleavage between the two oxygen of the R-OOH group (lowest activation energy). Therefore, the ROOH group is cleaved by homolysis  forming an alkoxy and a hydroxy radical. The example given below illustrates the fate of the C8-hydroperoxide formed from oleic acid (18:1 n-9 or 8-octadecenoic acid) by triplet oxygen oxidation.

The alkoxy radical is then cleaved by the homolytic b-scission of a carbon-carbon bond on either  side of the oxygen containing carbon atom.
The cleavage in position A gives rise on the left site of an alkene, 1-decene. 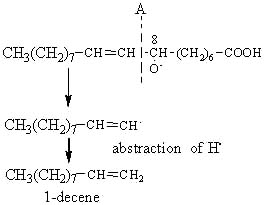 The volatile molecules formed by scission may be used to trace the original peroxidized lipids, for example (n-6) or (n-3) fatty acids. While present in all oxidized   tissues or oils, these hydrocarbons contribute to only a low extent to off-flavors, their threshold detection values being elevated (more than 100mg per Kg). Alkenes have noticeably mower threshold values (down to about 0.02 mg per Kg).

To have further information on natural aldehydes: click here
Fatty or volatile aldehydes having various chain lengths and unsaturation degrees are produced by homolytic b-scission. Their molecular structure depends on the oxidized precursor and on the localization of the scission resulting from  the oxidative attack.

Considering the previous  example, the decomposition of the 8-OOH oleate, the scission in position A may produce an alkyl radical on the methyl end of the molecule. This radical can then combine with a hydroxyl radical to produce an alcohol, this alcohol giving an aldehyde (decanal) by tautomerization. 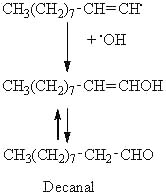 The scission in position B will produce another aldehyde (2-undecenal) and an alkyl radical: 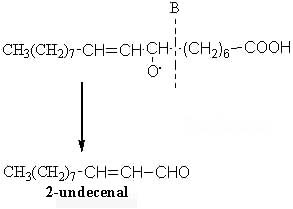 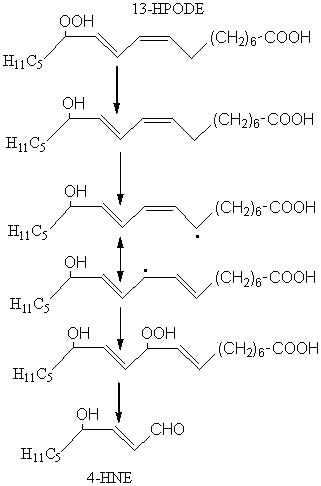 Among all these substances, malonaldehyde (MDA) is the object of a great interest despite its complex and yet not completely cleared origin.
Various precursors of MDA have been proposed but the most probable and the most biochemically important seem to be the monocyclic peroxides formed from fatty acids with 3 or more double bonds. Other efficient sources have been described: hydroperoxy bis-epidioxides, hydroperoxy bis-cycloendoperoxides and dihydroperoxides. Diene fatty acids (linoleic acid) were also shown to be good precursors in some defined  oxidative conditions (singlet oxygen, acid pH).
As an example, 12-hydroperoxy linolenate may undergo a cyclization followed by an oxidation forming a 5-membered hydroperoxy epidioxide as major product. The cleavage on each side of the endoperoxide ring was proposed as the main source of MDA. 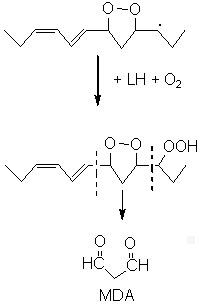 MDA may be formed also in some tissues by enzymatic processes with prostaglandin precursors as substates. Thus, thromboxane synthetase generates MDA, with thromboxane A2, from prostaglandin endoperoxides during human platelet activation (Hecker M et al., J Biol Chem 1989, 264, 141).
As 4-HNE, MDA is able to form adducts with free amino acids and many more with proteins. MDA introduces cross-links in proteins which may induce profund alteration in their biochemical properties. It has also been proposed that MDA could react physiologically with several nucleosides (deoxy-guanosine, cytidine).
It has been shown that MDA oxidatively generated from fatty acids may be recycled back into chloroplast galactolipids that may again be fragmented into MDA (Schmid-Siegert E et al., J Biol Chem 2016, 291, 13005).

Aldehydes are in general  the most important molecules responsible for the off-flavor in oxidized food or edible oils. The threshold detection  values are the lowest for unsaturated aldehydes since the threshold is about 1 mg per Kg for alkenals and more than ten times lower for alkadienals, some molecules (for example trans,cis-alkadienals) being detectable at far lower levels (about 2 mg per Kg). These volatile compounds are commonly found in frying oils and in fried foods as well as in the room where frying is carried out. Alkadienals are known to give the desirable “fried flavor” to fried potatoes when present at very low levels but excessive amounts are causing undesirable rancid flavors.

Long-chain a-hydroxyaldehydes are found in tissues after oxidative stress (ischemia) or aging. They are said to be formed by the attack of plasmalogen phospholipids by lipid peroxide radicals (LOO.).
Thus, it was shown that the enolic double bond of plasmalogens is easily attacked by LOO. and gives epoxyplasmalogens which decompose rapidly into long-chain a-hydroxyaldehydes (Scheick C et al, Liebigs Ann Chem 1993, 12, 1245). The synthesis and properties of these compounds were recently described (Kern W et al, Tetrahedron 1996, 52, 4347).

Epoxide groups (or oxirane oxygen) are generated by the attack of any double bond present in a fatty acid chain by a lipid peroxide radical (LOO.)

These epoxides were found in biological samples obtained during various induced oxidative stresses (burn injury, ischemia…). Epoxides are also found in raw samples of oleic acid because of the presence of small amounts of linoleic acid   which generates peroxides during storage. It must be noticed that peroxides do not accumulate in frying fats (heated at 180-190°C) since they decompose at about 150°C.

Linoleic epoxide was reported to be highly active in different biological systems. Two epoxides may be formed from linoleic acid : 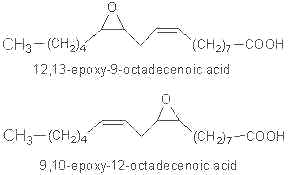 As they are toxic, these compounds were called “Leukotoxins” (Sugiyama S et al, Life Sci 1987, 40, 225). Similar molecules were found in plants after fungal attack.

One of these epoxides with a trans configuration, 5,6-trans-epoxy-8Z,11Z,14Z-eicosatrienoic acid, was identified in the sn-2 position of the phospholipids in rat red blood cells (Jiang H et al., J Biol Chem 2004, 279, 36412). This epoxide was shown to have the ability to relax renal arteries and to inhibit platelet aggregation. Thus, red blood cells were proposed to be a reservoir for epoxides which may participate to vasoregulation.

Besides arachidonic acid, epoxide derivatives have been synthesized from EPA (20:5n-3) (Van Rollins M, Lipids 1990, 25, 481) and DHA (22:6n-3) (VanRollins M et al., J Biol Chem 1984, 259, 5776). These derivatives, epoxyeicosaquatraenoic acid (EpEQE) from EPA and epoxydocosapentaenoic acid (EpDPE) are also generated by the action of renal and hepatic cytochrome P-450 monooxygenases (Fer M et al., Arch Biochem Biophys 2008, 471, 116). It was further demonstrated that these epoxides inhibited platelet aggregation at concentration below those that affected thromboxane synthesis. It can be suggested that the presence of these compounds may contribute to the antiaggregatory effects seen after consumption of n-3 fatty acid-rich diets (VanRollins M et al., J Pharm Exp Ther 1995, 274, 798). Investigations in animals have shown that EpEQE modulate nociceptive signaling associated with pain and inflammation (Morisseau C et al., J Lipid Res 2010, 51, 3481). In the rat brain and spinal cord, the regioisomers 17,18-EpEQE and 7,8-EpDPE are the most abundant.