Several extraction procedures may be found in books and articles aiming at the improvement of lipid recovery from any kind of organisms, tissues or cell types. After the first famous studies of Chevreul on the dissolution of lipid materials in various solvents, it is necessary to jump to 1879 when Franz von Soxhlet described the first method based on an automatic solvent extraction (diethyl ether) for milk lipids (Die gewichtsanalytische Bestimmung des Milchfettes, Dingler’s Polytechnisches J 1879, 232, 461). A further improvement was made in 1914 when a mixture of ethanol/ether (3/1) was used for lipid extraction (Bloor WR, J Biol Chem 1914, 17, 377).

Despite the early use of chloroform in extracting lipids (Bornmann JH, Assoc Off Agric Chem 1931, 14, 489), the greatest improvement of the extraction of polar lipids from animal tissues was made when Folch described in 1957 his classical extraction procedure (see Folch biography). This procedure remains one of the best described and the most commonly used by lipidologists around the world. Some other procedures were proposed by Bligh and Dyer (1959) and Sheppard (1963), which also used solvent mixtures made of chloroform/methanol and ethanol/diethyl ether, respectively. More recently, a simple methyl tert-butyl ether-based extraction has been proposed for the simultaneous extraction of lipophillic metabolites and lipidome from small amounts of tissue sample (Chen S et al., J chromatogr A 2013, 1298, 9).

The estimation of the fat content in foods by measuring the amount of acyl lipids is of common practice but the choice of an extraction procedure needs to be evaluated to get reliable results. As a guide, a comparison of several methods to measure the oil contents in oilseeds may be consulted (Barthet VJ et al., J Oleo Sci 2002, 51, 589). A simplified method for chloroform/methanol extraction and gravimetric determination of total fat was tested on several foods and food stuffs (Phillips KM et al., J Food Lipids 2008, 15, 309).

A critical discussion of the various problems arisen in determining the content and chemical nature of lipids in feedstuffs has been done in the paper of Palmquist DL (Palmquist DL et al., J Anim Sci 2003, 81, 3250). The authors have shown clearly that the preferred method of fat analysis in feedstuffs is the determination of the total fatty acid concentration by converting fatty acid salts, as well as the acyl components in all lipid classes, such as triacylglycerols, phospholipids, and sphingolipids, to methyl esters using a simple, direct one-step esterification procedure. Fatty acid methyl esters are then quantified by GLC, which provides information on both fatty acid quantity and profile in a single analysis (Sukhija PS et al., J Agric Food Chem 1988, 36, 1202).

All tissues must be sampled freshly before lipid extraction to prevent any hydrolysis or oxidation before its dispersion in the solvent mixture. The presence of lysophospholipids, phosphatidic acid, monoacylglycerols, diacylglycerols or free fatty acids should indicate a possible degradation before extraction. In some special cases, special precautions are necessary to minimize rapid degradation of lipid constituents. Thus, plant tissues need to be processed immediately after collection by immersion in hot 2-propanol or water. Plant phospholipase D is known to be active even in some solvents !!
Any tissue which cannot be extracted immediately should be frozen as rapidly as possible in dry ice or better in liquid nitrogen and stored in sealed glass containers at -70°C.
Fresh or frozen tissues should be homogenized in the chosen solvent mixture and agitated during a fixed time before elimination of the solid part. Soft tissues may be minced with scissors in the cold and homogenized in solvent with an Ultraturax type device, a Warring blender or a glass-Teflon Potter. Hard tissues (muscle, vessels, bone…) are best pulverized in a mortar filled with liquid nitrogen.

A special programmed and motorized device (Freezer Mill 6800) may be used to pulverize finely and easily soft or hard tissues in one or two minutes in liquid nitrogen. 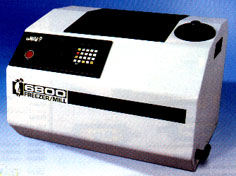 The powder is then rapidly weighed and poured in a glass tube where the extraction solvent is added. We have adopted this methodology for analyzing very labile compounds such as free fatty acids, diacylglycerol and phosphoinositides. Liquid medium (plasma, blood, culture medium) are directly extracted by addition of the required solvent and strong mixing.

First, we give details on the classical Folch’s procedure but several other procedures are described below taking into account the tissues or biological preparations used in more specialized studies.