Since recently, lipoic acid (LA) was detected by gas chromatography after derivatization. Now, progress was made to enable the quantification by HPLC of the oxidized and the reduced forms of lipoic acid in a single run. We have adopted a method based on derivatization and fluorimetric detection (Haj-Yehia AI et al., J Chromatogr A 2000, 870, 381) The reduced form (dihydrolipoic acid, DHLA) is estimated after treatment with an S-alkylating agent. The fluorescent derivatives of LA and DHLA are stable and the detection limit is very low (about 0.5 ng/ml). The analysis is effected in about 15 min.

Preparation of a DHLA standard solution – 10 mg of LA are dissolved in 1 ml 0.05 M NaOH in water containing 50 mg/ml of NaBH4. After a 10 min incubation at 60°C, the formed DHLA is converted into its S,S-dicarboxyethyl derivative by addition of 0.4 ml ethylchloroformate and vortexing 15 min at 20°C. After acidification with 2 M HCl to pH < 1, the derivative is extracted with 2 x 3 ml of hexane. The extract is washed with 1 ml of 0.2 M HCl and evaporated before redissolving in acetonitrile freshly before use.

Extraction of LA and DHLA from biological fluids – 1 ml of plasma or tissue extracts is mixed with 0.2 ml of 2 M HCl and 1.25 ml dichloromethane. After vortexing and centrifugation (low speed at 4°C), the lower layer is separated and evaporated under nitrogen. The extract is then derivatized as described below.

HPLC analysis – A mixture of acetonitrile/water (80/20, v/v) is used as eluent at a flow-rate of 1 ml/min. The fluorescence detection is operated at excitation and emission wavelengths of 343 and 423 nm, respectively.
The recovery of the amide derivatives of LA and DHLA is about 80% and correction is effected from the internal standard added before the extraction. A good linearity is observed up to 250 ng/ml, the detection limit is about 0.1-0.5 ng/ml but is dependent on the instrument used. 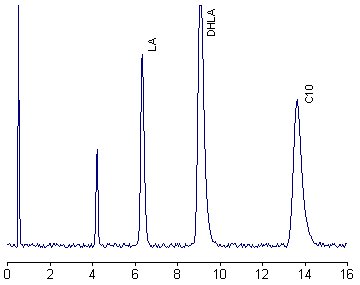