Since ceramides are made of one long-chain base and one fatty acid, their chemical structure is defined when the pattern of each of these constituents is determined. A complete knowledge of the ceramide pool is reached only after identification of all the molecular species forming this pool.

The determination of long-chain bases and fatty acids of ceramide species are determined after a degradative procedure strong enough to cleave the amide bond (adapted from Gaver et al J Am Oil Chem Soc 1965, 42, 294).

1 ml methanolic HCl is added to dried ceramides (1-3 mg) in a Teflon-sealed glass tube and the mixture is heated 5 h at 75°C and then cooled.

A- Extraction and separation of fatty acids

The methanolic solution is washed directly two times with 2 ml hexane, the washings are collected and evaporated, the lower phase being kept for long-base extraction. The dry extract contains methylated fatty acids either normal or hydroxylated.

Separation of the normal and hydroxylated fatty acids:

Fatty acids are separated by TLC on silica gel plates with hexane/diethyl ether (85/15, v/v) as eluent. Detected after primuline spray under UV light, spots corresponding to the two fatty acid classes are scraped and fatty acids are eluted with dichloromethane washings (2 times 2 ml). Standard solutions are prepared by methylation with BF3/methanol of commercial compounds (one normal and one hydroxylated fatty acid).
Normal fatty acids can be analyzed directly by GLC but hydroxylated fatty acids must be previously derivatized by reacting with a reagent such as SIL-A from Sigma (100 µl, 15 min at 30°C) or BSTFA-TMCS from Alltech (100 µl, 4-5 h at 20°C).

B- Extraction of long-chain bases

Long-chain bases are analyzed as previously described after, if necessary purification by TLC.

Another approach to the technical problem of the hydrolysis of glycosphingolipids has been described using a one-spot heating in a microwave oven with 0.1 M NaOH in methanol for 2 min followed by 1M HCl in methanol for 45 s (Itonori S et al., J Lipid Res 2004, 45, 574).

To prevent N-acyl migration, it was shown that methanol or dichloromethane are the preferred solvent for long-term storage of ceramides (Van Overloop H et al., J Lipid Res 2005, 46, 812).

A separation procedure of ceramide molecular species was proposed without the need of derivatization using the evaporative light-scattering detection (Zhou JY et al, J chromatogr A 1999, 859, 99).
The effects of the presence of triethylamine and formic acid in the mobile phase on the evaporative light scattering detection were also reported (Gaudin K et al. J Liq Chrom Rel Technol 2000, 23, 387).

Column: Kromasil C18 (Eka Nobel) (125×2 mm, 5µm), the column was thermostated at 35°C.
Mobile phase: acetonitrile/propanol (70/30, v/v) containing 10mM triethylamine and 10 mM formic acid, flow rate: 0.4 ml/min
The response of the detector was not linear but linearization was possible using double logarithmic coordinates  between 10 to 350 ng injected. The lower quantification limit was about 5 ng of ceramide.
The authors proposed another detection system using a post-column addition of a solution of 1,6-diphenyl-1,3,5-hexatriene enabling a fluorescence detection with a linear response from 10 to 1000 ng and a similar sensitivity.

Ceramides derivatized with naproxen are separated into molecular species by reverse-phase HPLC on a C18 stationary phase and with fluorescence detection. The separation is on the basis of the chain-length and degree of unsaturation of the alkyl moiety considering that only one type of long-chain base is present. The pattern is more complex if several long-chain bases are present.

We give below a chromatogram obtained from ceramides prepared from bovine brain sphingomyelin (Type III from Sigma). Only 100 ng of ceramides were injected. 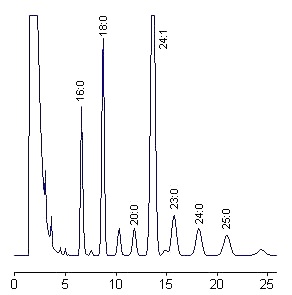 Peaks are labeled according to the fatty acid moiety using standard commercial species and a graph relating the logarithm of the corrected retention time and the number of carbon atoms (linear relationship). Some peaks are unknown.

A sensitive, selective and rapid method was described for the analysis of ceramides in the human stratum corneum by direct coupling of HPLC with an electrospray ion-trap mass spectrometry. This combination enables the differentiation between ceramide species without special sample preparation.
see: Vietzke J-P et al, Chromatographia 1999, 50, 15.

– High-temperature micro liquid chromatography for lipid molecular species with evaporative light scattering detection. Hazotte A et al., J Chromatogr A 2007, 1140, 131-9
A quick and simple method is described to analyze the molecular species of ceramide type III and type IV. Ceramide where analysed using a capillary column maintained at 150°C with an ethanol–butanol gradient and a flow rate of 60 ml min-1.

– Quantitation of yeast ceramides using HPLC and ELSD. Zhou Q et al., J Chromatogr B, 2002, 780, 161-9
Phytosphingosine-containing ceramides and ceramide III and IV from Sigma were separated on a silica column coupled with light-scattering detection. After a simple saponification step, these compounds were directly and effectively separated without interference from other molecules (sterols). A 25-min gradient elution between chloroform and chloroform/ethanol (75/25) was used. Under optimized HPLC-ELSD conditions, the detection limit was about 0.4 mg, the optimal amount being about 0.8 mg.

– Analysis of ceramides by HPLC coupled to tandem mass spectrometry. Fillet M et al., J Chromatogr A 2002, 949, 225-233
Ceramides were separated on a RP C18 column with a mobile phase formed by gradient mixture of water/ACN/2-propanol and ACN/2-propanol. In less than 12 min, all ceramides were separated, the linearity confirmed in the range 0-50 ng, le limit of detection being about 0.3 ng.

– Isolation of ceramide fractions from skin sample by subcritical chromatography with packed silica and evaporative light scattering detection. Lesellier E et al., J Chromatogr A, 2003, 1016, 111-121
Ceramides from the stratum corneum were separated with silica and supercritical CO2 containing 10% of methanol. The detection was improved by post-column addition of 1% triethylamine and 1% formic acid.